Chloe' Stevens, going up for a spike, helped lead Kubasaki to three straight titles in the Far East Division I Volleyball Tournament, a first for any DODEA-Pacific program, but will miss her senior season due to a torn ACL suffered last spring. (Zoe Hall/Special to Stripes)

Chloe' Stevens, going up for a spike, helped lead Kubasaki to three straight titles in the Far East Division I Volleyball Tournament, a first for any DODEA-Pacific program, but will miss her senior season due to a torn ACL suffered last spring. (Zoe Hall/Special to Stripes) Maiya Larry helped lead Kubasaki to three straight titles in the Far East Division I Volleyball Tournament, a first for a DODEA-Pacific program, and earned MVP honors in the 2016 tournament, but will miss her senior season with a damaged right shoulder. (Dave Ornauer/Stars and Stripes) 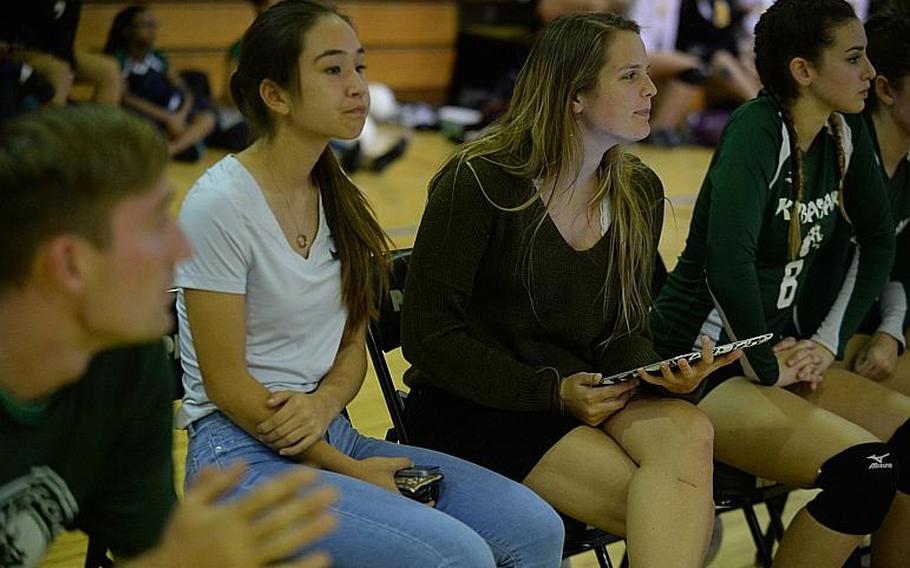 Seniors Maiya Larry and Chloe' Stevens are sidelined for the volleyball season due to injury, but remain a part of Kubasaki's program, supporting teammates in practices and helping keep stats during Dragons volleyball matches. (Dave Ornauer/Stars and Stripes)

CAMP FOSTER, Okinawa – The cheering had barely died down three Novembers ago, following one of the biggest upsets in Far East Division I Volleyball Tournament history, when then-freshmen Chloe’ Stevens and Maiya Larry of Kubasaki said they made a pact.

They would become the first two players to go from freshmen to senior seasons as tournament champions and All-Tournament selections.

They almost made it – the Dragons became the first DODEA team to win three straight Far East titles, led by their two All-Star picks.

But fate provided a different ending than they envisioned: Stevens and Larry are losing their senior seasons to injury, Stevens with a torn ACL and Larry, a former D-I MVP, with a right-shoulder dislocation compounded by a chipped bone.

Each says they’re not taking it well – especially since they had the same injuries before - Stevens in seventh grade and Larry prior to her freshman year.

“The second I fell, I yelled that it was my ACL,” said Stevens, injured last April during a trip by her private Shisa club team to Yokota. “I knew right away. I hoped it was not. I had an MRI three days later and it was totally gone. Not just torn, but completely gone.”

Stevens had surgery May 24 and has been rehabilitating since, but she can never play volleyball for the Dragons again.

“When it first happens, you’re angry and I was angry and thought it wasn’t fair,” Stevens said.

Stevens had been a three-sport star, also playing basketball and soccer, and had settled on volleyball as the sport she wants to play in college. “Which was why I quit soccer; I didn’t want to tear it in soccer. And I tore it doing volleyball,” Stevens said.

Larry injured her shoulder in late June and again in early August, and said despite exercising, resting and icing and doing what therapists told her to do, “there were no results of it getting better,” Larry said. “I started losing hope that it would get better.”

Larry undergoes surgery in October, and like Stevens, full recovery is expected to take a year or more.

Even before she went down, Larry said she was upset over Stevens getting injured.

The pain, Larry said, reminded her of her freshman year, when she said she hid shoulder pain from her coach Michael Hogen. “I was never able to tell him how much pain I was in playing libero, but I was in pain the whole season and at Far East,” Larry said.

Despite that, she earned top defensive player honors when Kubasaki stunned three-time defending champion American School In Japan in a four-set final. The Dragons repeated their success the next two Novembers, with Larry earning 2016 MVP honors.

“It was really emotional for both of them,” Hogen said of them having to give up volleyball. “Those two are at the very top of the list of how much they’ve invested in volleyball.”

Stevens and Larry have remained a part of the program, though it’s been easier, Stevens said, for her, since she’s already had the surgery and Larry’s is yet to come.

“I want to support them, but it’s been really hard,” Larry said.

Still, she comes to matches and sits on the bench with Stevens, who continues to mentor younger Dragons during practices and keeps statistics during matches.

Where it gets awkward, Larry said, is at home, where even discussing the sport with her younger sister, Mimi, a junior, can be difficult. For her part, Mimi, the team’s setter, said she understands that she needs to “give Maiya some space” although the two “talk about it from time to time.”

Stevens and Larry say they plan to continue the sport in college once they recover, especially since they lost their final high school seasons to injury.

They credit Hogen for that perseverance.

“Everything happens for a reason,” Stevens said. “We owe coach Hogen a lot.”