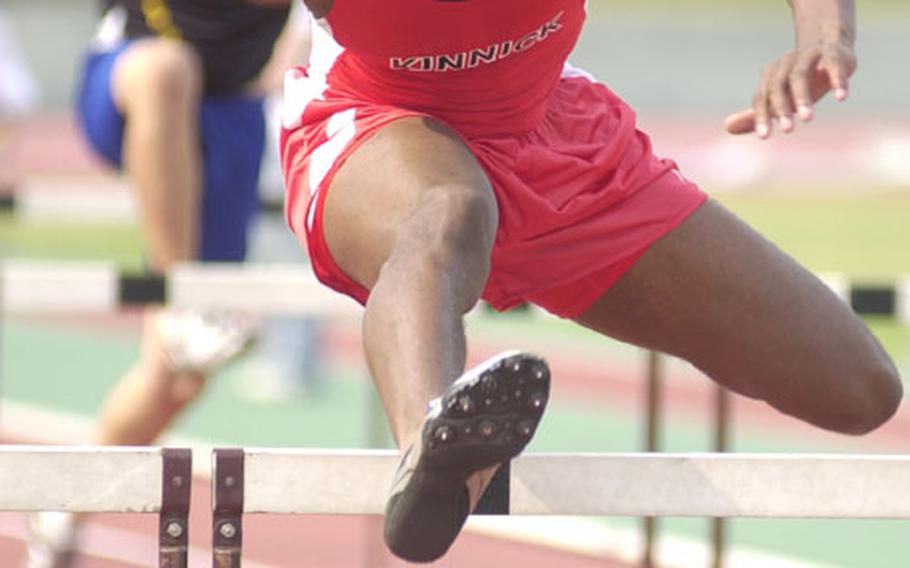 Kubasaki didn&#8217;t run for team scores or medals. Only for pride.

And while St. Mary&#8217;s International and the American School In Japan successfully defended their respective boys and girls meet crowns, Kubasaki, with just 15 athletes, made a respectable showing. The Lady Dragons won six events and the boys two.

Had Kubasaki&#8217;s runners earned team points and medals in the Kanto finals, the boys and girls would have both finished fourth, according to Kanto Plain track league recorder and Christian Academy In Japan coach Craig Eby.

Kubasaki brought &#8220;quality athletes&#8221; to Tokyo, Martinez said. Junior Serafina Smith and sophomore Crystal Sandness each won two individual events and contributed to a 1,600 relay victory, in addition to the boys&#8217; relay win and Chris Robinson&#8217;s dash to victory in the 200.

Why bother, though, raising $4,000 to travel to Tokyo, when your team can&#8217;t medal or score team points and there was every chance that rain could drown the meet?

Underclassmen such as Sandness and Smith &#8220;are getting the experience of being in a big-time track meet, and it makes them compete better. You can&#8217;t put a price tag on that,&#8221; Kadena coach Charles Burns said.

Yokota matched its best finishes in the meet in both boys and girls, with the Lady Panthers placing third with 92 points. Seisen International was second with 111&#189;, while ASIJ took the top spot with 132.