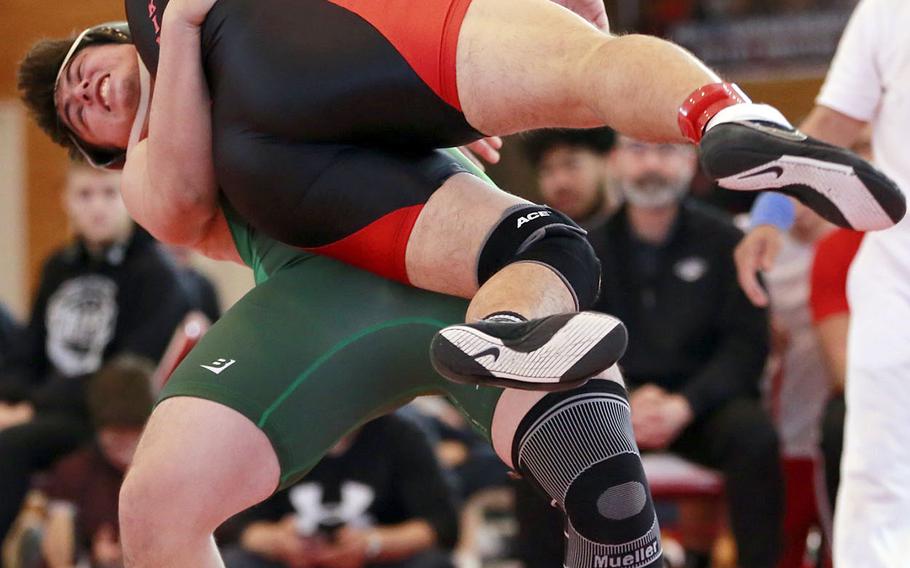 Not only did Kubasaki's Haydn Peterson unseat 215-pound champion Chris Mason of Nile C. Kinnick -- the bout decided the team title in favor of the Dragons. (Emma Stevens/Special to Stripes)

Not only did Kubasaki's Haydn Peterson unseat 215-pound champion Chris Mason of Nile C. Kinnick -- the bout decided the team title in favor of the Dragons. (Emma Stevens/Special to Stripes) 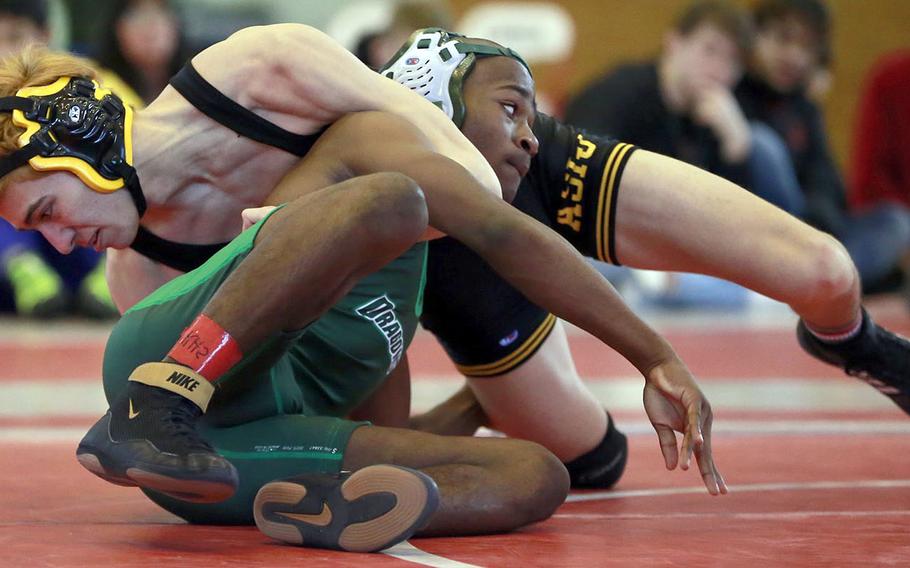 Kubasaki's Jaylen Mayers tries to free himself of American School In Japan's Ira Kadet's grip in the 122-pound final. (Emma Stevens/Special to Stripes) 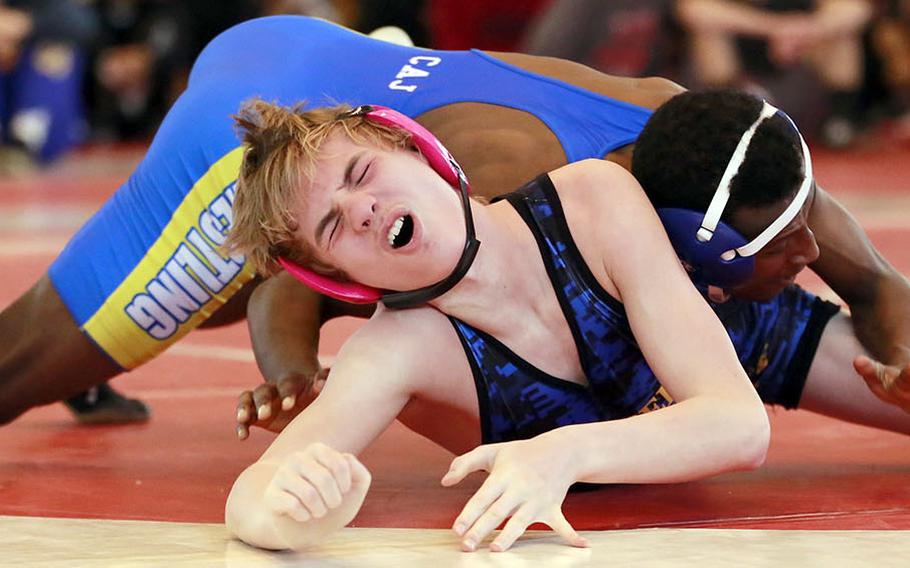 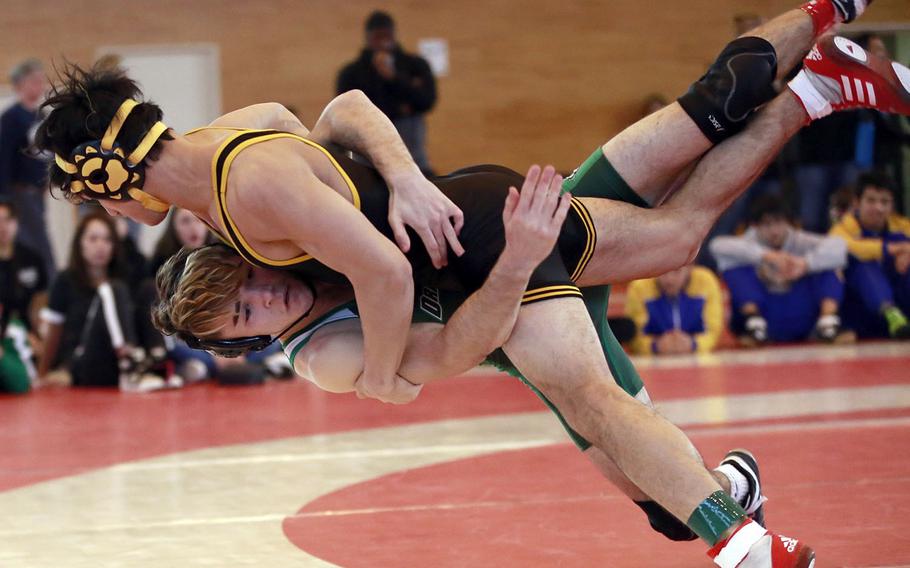 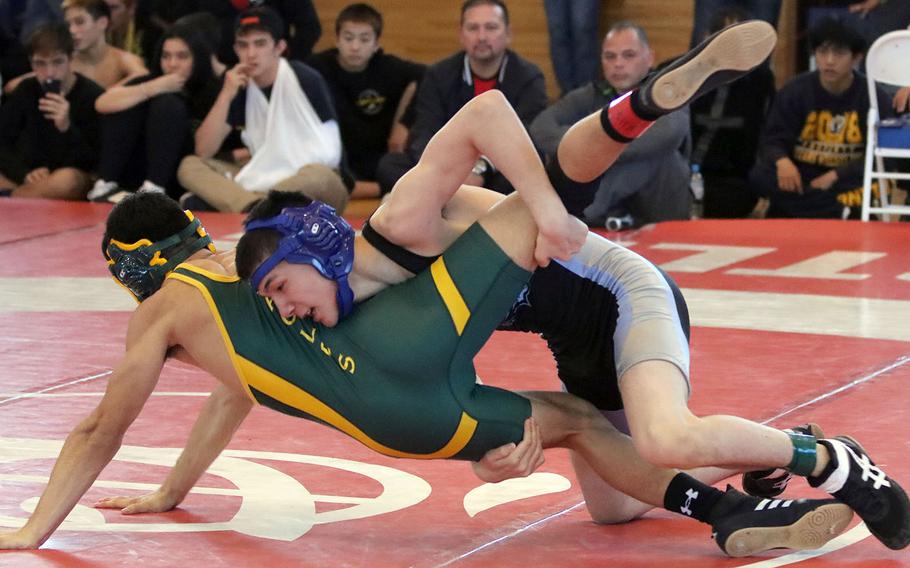 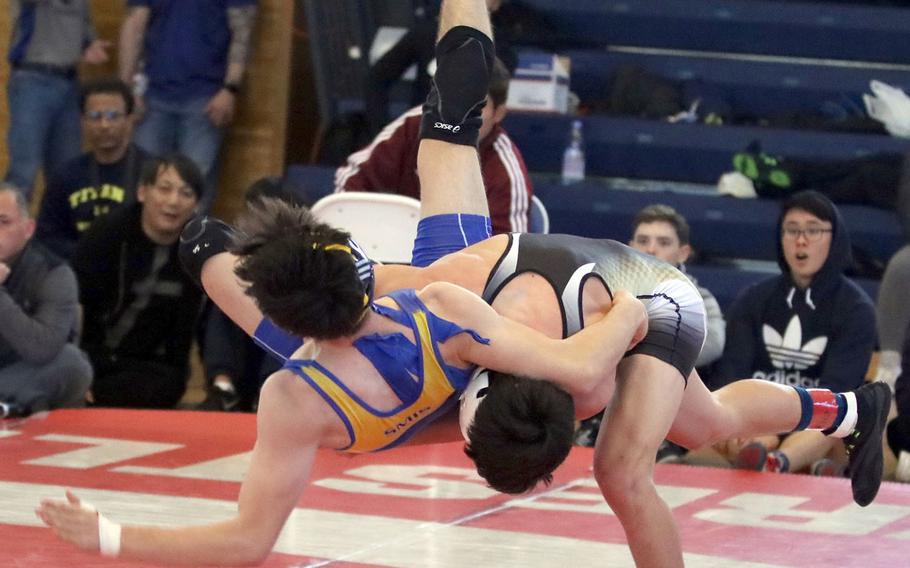 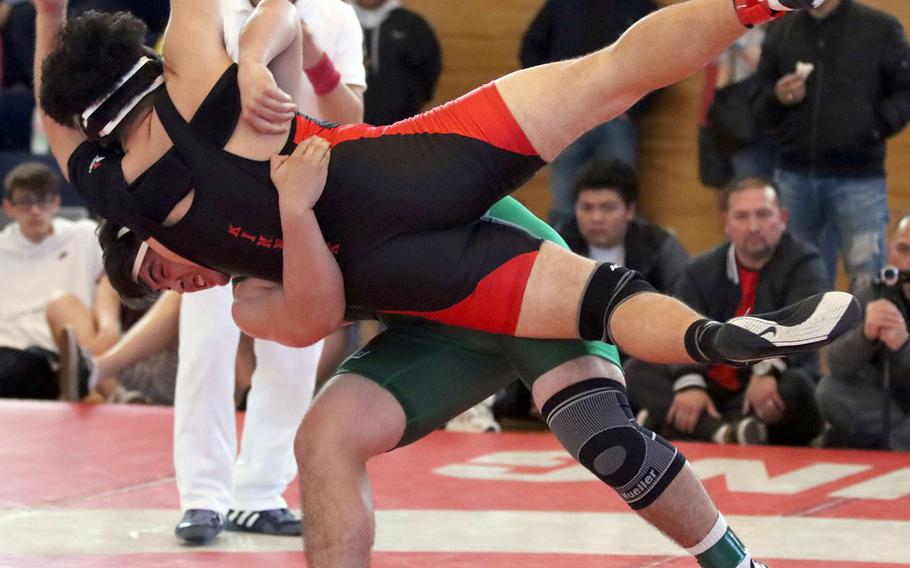 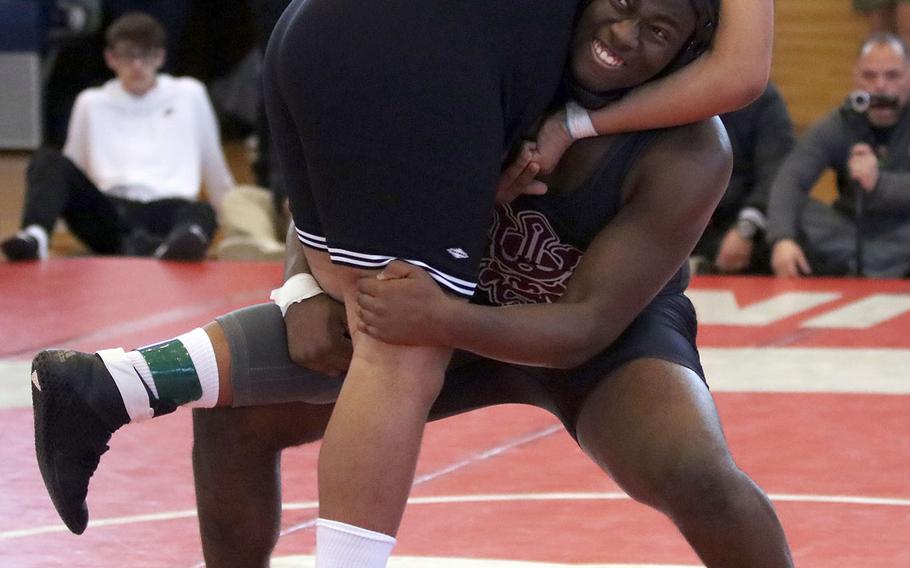 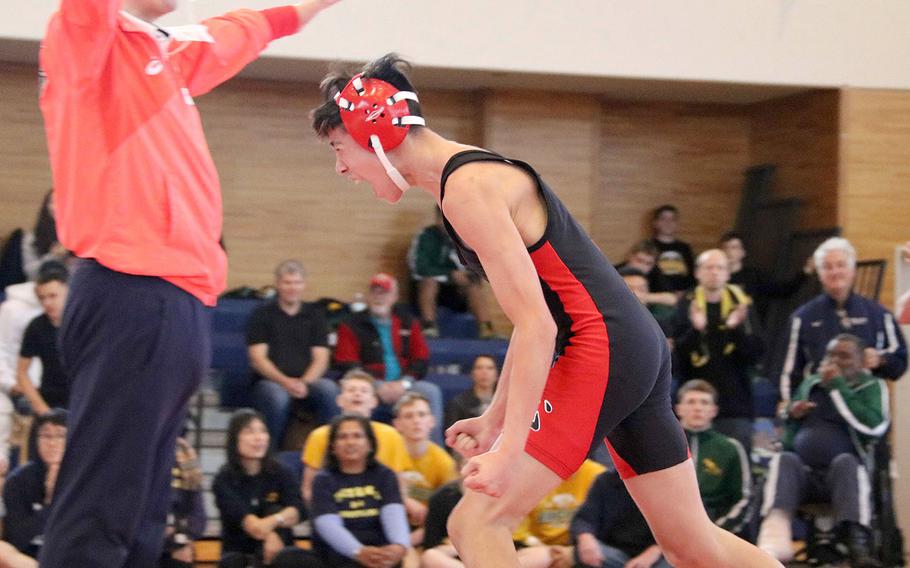 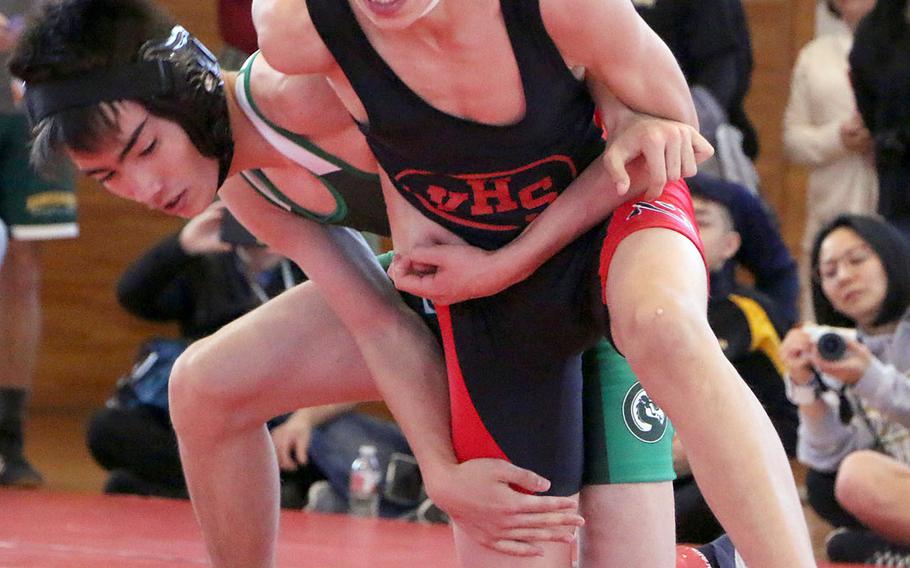 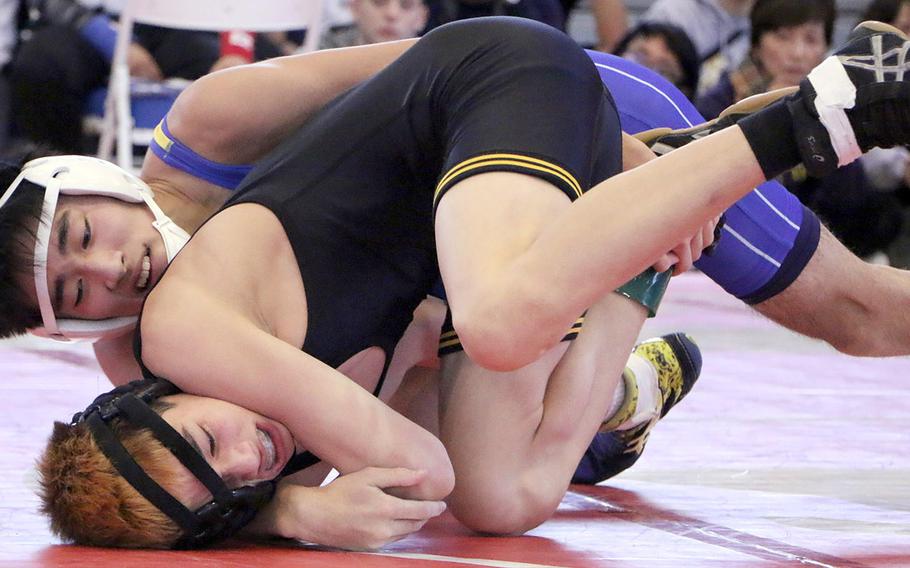 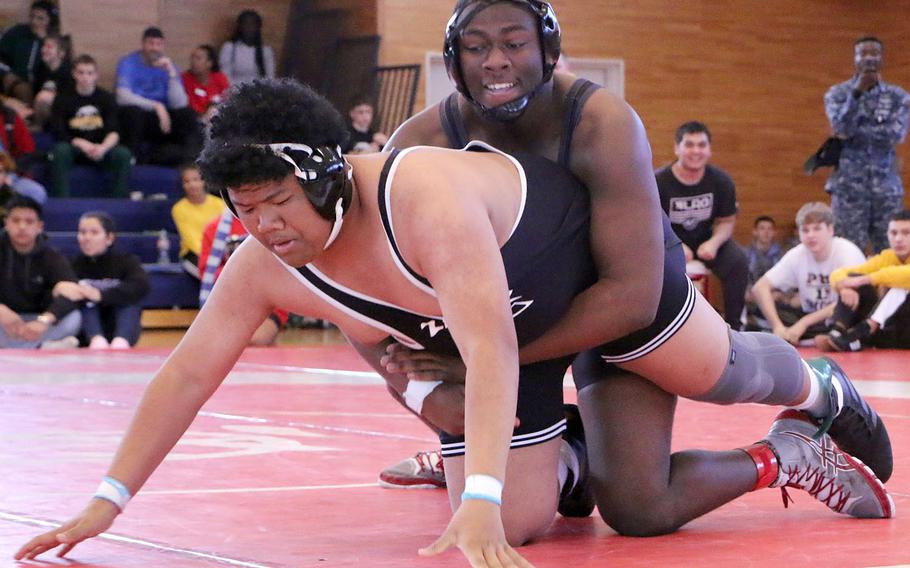 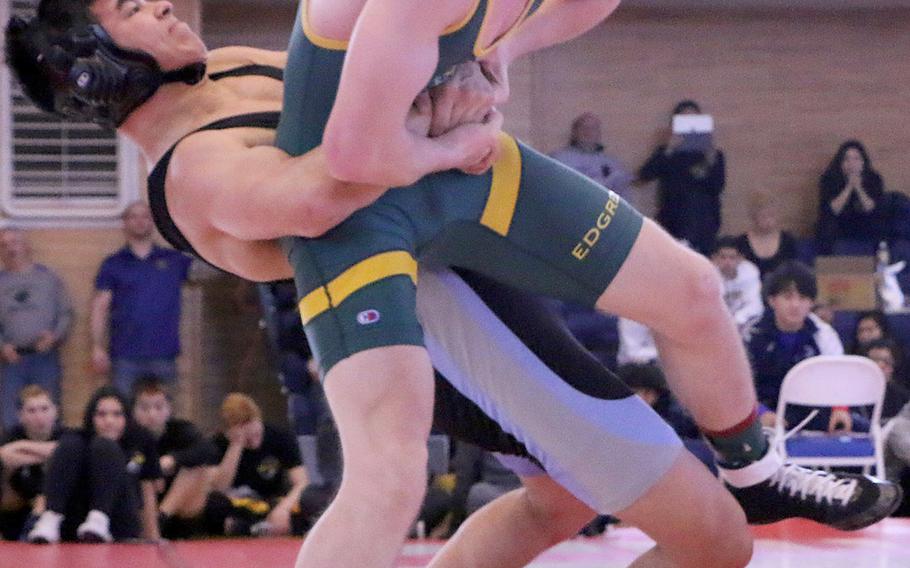 It was a red-letter day for Korea-based wrestlers in the 42nd Far East tournament in a season where teams in Korea had trouble fielding full lineups.

And Humphreys recorded a school first, as Will Allen, a 135-pounder, became the first Blackhawks wrestler to win a Far East title.

VanHoose transferred from Centennial High School in Idaho to Osan three years ago having won just one major in-season invitational there, the Treasure Valley Tournament, as a freshman.

On Friday, he captured his own form of treasure, winning the 129-pound final by pin over Sam Squires of Robert D. Edgren in 1 minute, 30 seconds.

“I’m really happy about that,” VanHoose said after his championship bout at Yokosuka Naval Base, Japan. He said he’d been unaware that he broke the school record, held by several Cougars wrestlers in the 1990s and 2000s.

“That makes it really special for me,” VanHoose said. “I’m glad I worked as hard as I did.”

VanHoose’s championship was one of several milestone feats by teams and individuals on Day 2 of the three-day Far East tournament. Individual freestyle finals were held Friday; the dual-meet tournament began later Friday and concludes with the finals Saturday.

“I didn’t expect to go this far in the tournament,” said Inthavixay, who like VanHoose went unbeaten this season.

Inthavixay wrestled Dettman last season and said he realized he had to adjust to make it past him again. “He’s very strong,” Inthavixay said. “He’s better than he was last year. I had to change my style a little bit, use throws, anything to mix it up.”

“Both throws were amazing,” said VanHoose, who paused after his title bout to watch Allen win his.

“This is very exciting,” Allen said, crediting his coaches and teammates for his success this season. “I thank all of them.”

Allen said he had his hands full with Krcelic and needed to employ a series of countermoves to keep him at bay. “I used his arms and his momentum against him,” Allen said.

It was the first time since 2013 that St. Mary’s and Kinnick didn’t finish atop the team standings – Kubasaki extended its Pacific record with its 26th Division I team title and first since 2013.

Kubasaki won by just two points over St. Mary’s, capturing the crown thanks to Haydn Peterson’s 10-0 technical fall win over Mason in 1:27. It was his match that decided the team title.

“This is really exciting, so amazing,” Peterson said. “This team has worked so hard, we’ve pushed every weight class to the limit and all the hard work has paid off.”

“Like always, I’m proud of them,” Edmonds said. “They did a good job.”

“I’m surprised to be the champion,” Mutoh said, crediting Wirth for teaching him moves and to be more aggressive on the mat.

Christian Academy Japan’s 108-pounder Jordan Van Druff unseated Heino with an 11-1 technical fall in 4:41. He said he had mixed feelings about beating Heino. “Both of us have worked very hard,” he said. “He (Heino) has one year left; I expect him to win his weight next year.”

Experience helped China reclaim his heavyweight title, the Perry senior said. “I’ve been through it before; I knew what to expect,” said China, who returns next year to chase a third straight title. “That’s the plan,” he said.