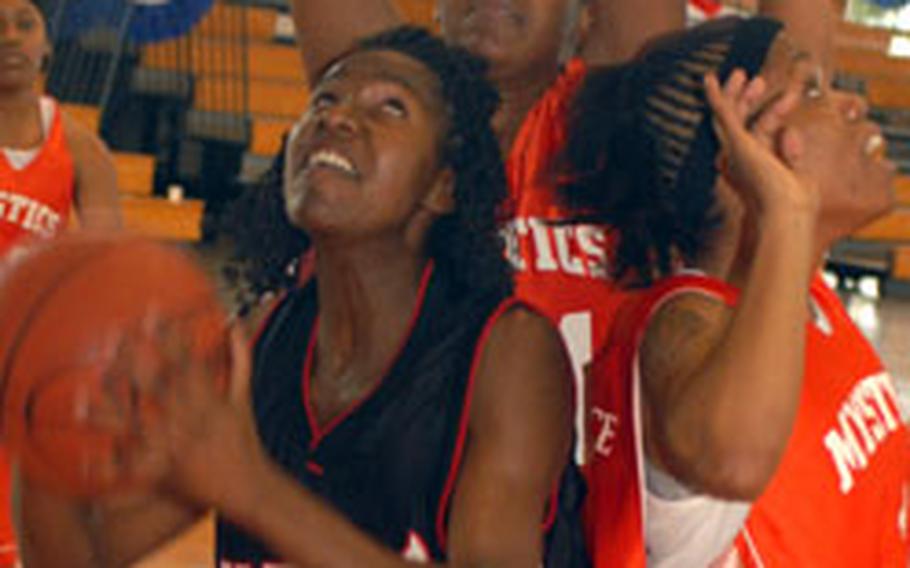 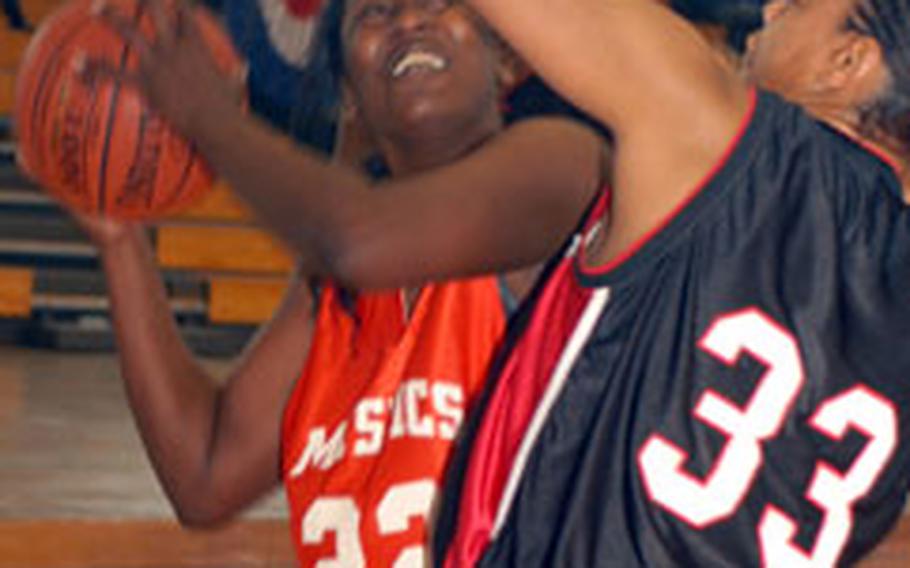 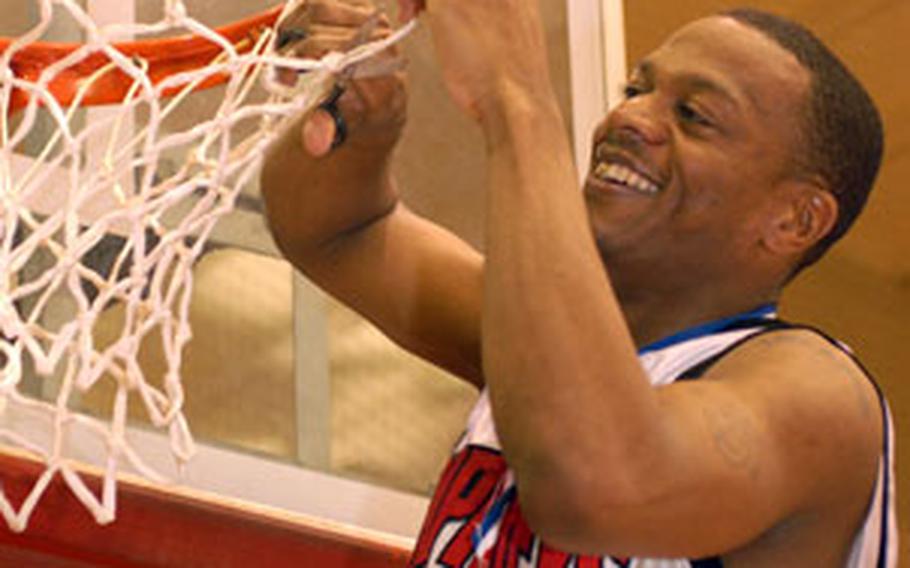 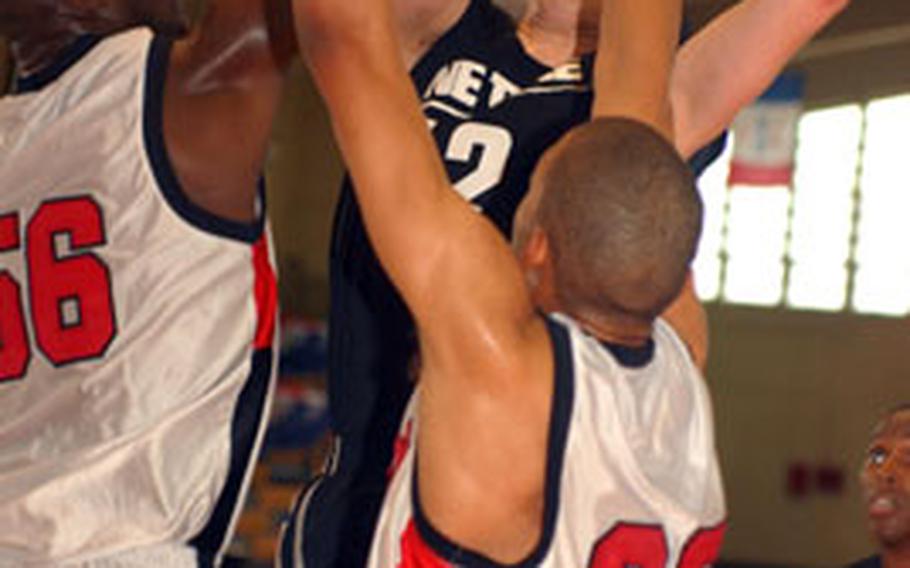 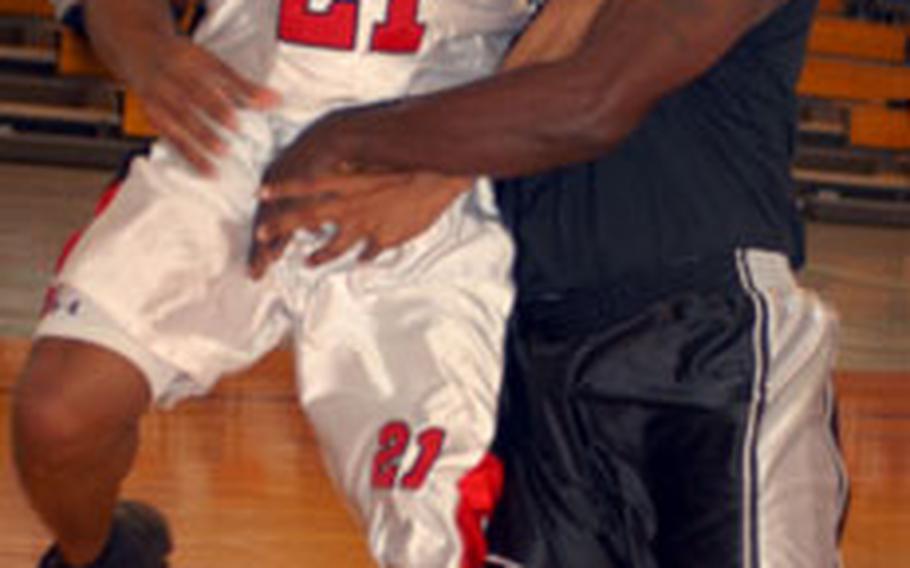 Guard Lorenzo Thompson (21) of South Korea&#39;s Camp Humphreys Bulldogs has the ball stripped out of his hands by Rodney Brown of Okinawa&#39;s One Time during Monday&#39;s men&#39;s championship game. Thompson scored 32 points, shooting 12-for-14 from the foul line, as Camp Humphreys beat One Time 97-77. (Dave Ornauer / S&S)

CAMP FOSTER, Okinawa &#8212; Whether playing hoops or saving lives, Jacqueline Kershaw proved herself quite adept this weekend on the Foster Field House courts.

The shooting guard scored 15 points and recorded five steals Monday, helping her Camp Red Cloud squad lead by as many as 26 points en route to thumping the Okinawa Mystics 68-51 for the women&#8217;s title in the 14th Martin Luther King Invitational Basketball Tournament.

The victory came less than 24 hours after Kershaw, an Army medic, performed CPR on referee John Zivic, who suffered an on-court heart attack. Doctors credited the work of Kershaw and four others for saving Zivic&#8217;s life; he lies in critical condition in a Japanese hospital.

Meanwhile, Camp Humphreys used the inside-outside attack of guards Jamar Pitts and Lorenzo Thompson, who combined for 78 points and the Bulldogs also led by as many as 26 in pounding One Time of Okinawa 97-77 in the men&#8217;s title clash.

Kershaw, 30, an Army sergeant from Columbia, S.C., assigned to Korea&#8217;s Camp Hovey, rushed immediately to the stricken referee&#8217;s side after Zivic collapsed during a men&#8217;s game Sunday evening.

In the men&#8217;s final, Pitts (26 points) worked the perimeter with five three-pointers, while Thompson drove the lane to earn trip after trip to the foul line, where he shot 12-for-14.