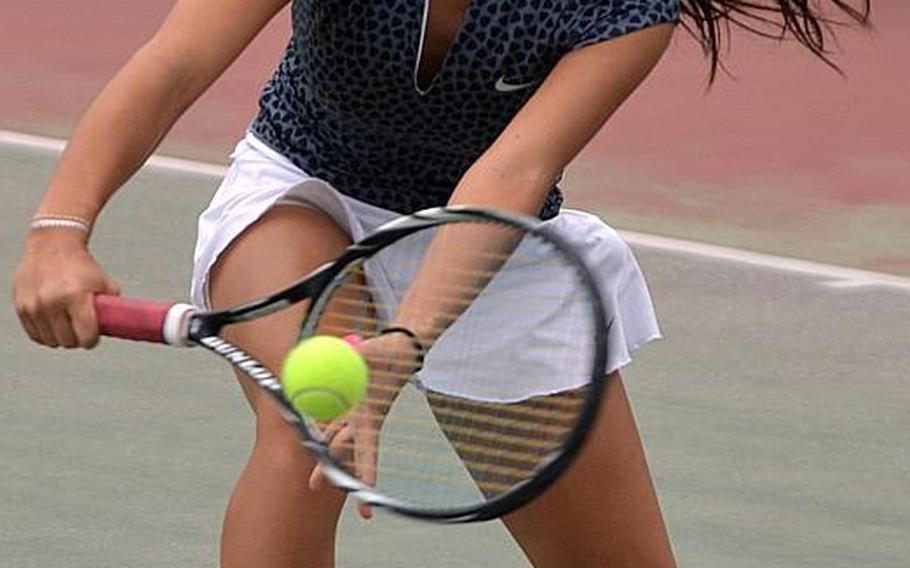 American School In Japan senior Lili Kobayashi reaches for a backhand return during the Nov. 5, 2015 singles championship match in the Far East high school tennis tournament. Kobayashi was selected as the 2015 Stars and Stripes girls tennis Athlete of the Year. (Dave Ornauer/Stars and Stripes)

She hadn’t wanted to play singles at all.

Lili Kobayashi says she professed to being more fond of doubles play, despite being a two-time Far East Tournament girls singles finalist and defending champion.

Why? “I don’t like being alone out there on the court,” the American School In Japan senior said. “I feel like I’m alone out there. It’s hard to motivate yourself. With doubles, you have somebody else you can depend on on the court.”

Kobayashi spoke Wednesday, six days after successfully defending her Far East title – and against good friend and her rival of the past two seasons, Matilde Piras of Seisen International.

Her 6-4, 6-2 victory was the one time in four matches that she beat the Seisen junior, and it came a week after Piras beat Kobayashi in straight sets in the Kanto finals.

For capturing her second straight Far East singles crown, this time doing it against her chief rival, Kobayashi has repeated Stars and Stripes Pacific high school girls tennis Athlete of the Year honors.

But that Far East singles repeat might not have come at all, Kobayashi said, had her coaches, Jen Brown and Stephen Bennett, agreed to let her play girls and mixed doubles.

Kobayashi was needed, they decided, at singles and girls doubles, in which she was paired with longtime teammate Nana Yoshimura.

And there was the early-season weather to deal with. Rain washed out several ASIJ matches, and rescheduling was difficult, to the point where the Mustangs only had four regular-season matches to prepare for the Kanto and Far East tournaments.

“The team couldn’t get as much tennis in as we wanted,” Kobayashi said. “Any chance we had, we took, but it wasn’t as much preparation as we wanted. It was hard to get back to the level we wanted.”

Still, Kobayashi pressed ahead. But those three early-season losses to Piras stayed with Kobayashi, she said, starting with three-set loss on Sept. 26, ASIJ’s Spirit Day.

The same thing happened in a rematch at Seisen on Oct. 8, and again in the Kanto finals. The two had played a three-set final in the same tournament a year ago, but this time, Piras won in straight sets.

“She’s so focused,” Kobayashi said. “She’s a rival, but a friend, too. It’s hard to play that kind of player. By the second match, you could definitely see she was more fit. I was really tired. And she’s really improved. And now, I needed to start working harder.”

Through it all, though, there was a common denominator. Whether winning or losing, through good times and bad, Kobayashi said she could always depend on her teammates, cheering for her from the side of the courts.

It was after the Kanto finals, she said, that she made up her mind: If she had a chance to play Piras again, and hopefully in the Far East finals, she would go all out, and not just for herself.

“Revenge, not just for me, but for the team that supported me,” Kobayashi said.

You have the opportunity, her teammates said. Leave it all on the court. You have nothing to lose. Last time representing the Mustangs on the court.

“Those words brought something out in me that hadn’t been brought out before,” Kobayashi said.

In addition to winning the singles, she and Yoshimura held a 4-6, 7-6 (7-1), 4-3 lead in the girls doubles final against Piras and Ana Clara Borga; that match is to be completed soon, and at neutral courts at Sacred Heart.

With Kobayashi graduating, Yoshimura, a junior, takes the torch from her. “I hope she (Piras) and Nana have that kind of rivalry next year,” Kobayashi said.