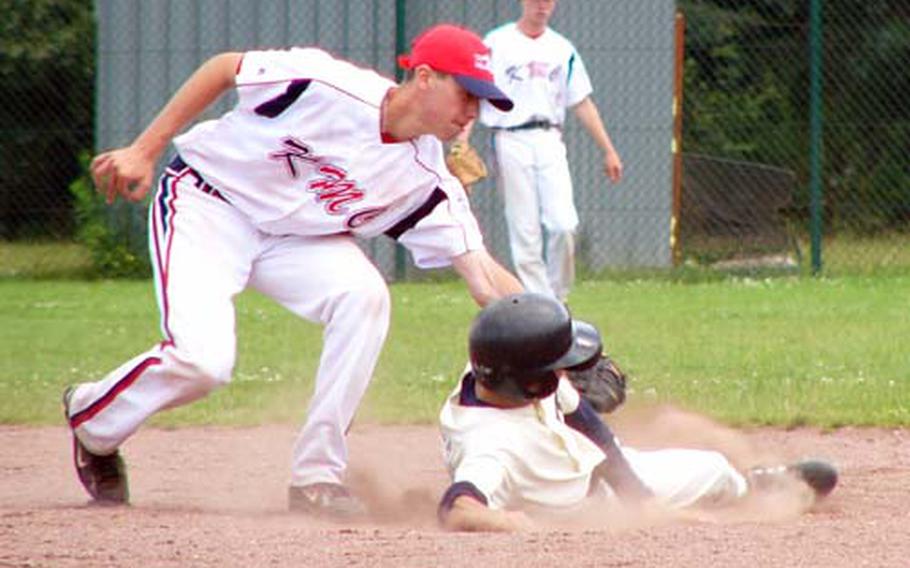 KMC was facing elimination from the tournament after Germany improved to 2-3 in the round robin with a 7-1 victory over winless Netherlands on Thursday morning. A KMC loss would have given Germany, a 13-9 victor over KMC on Wednesday, the final berth in Friday&#8217;s semifinals.

Instead, Sloan, who is 10-for-18 with 11 RBIs in five games, gave KMC (3-2) a quick 2-0 lead with his one-out single to left to score Ian Acosta, who reached on a two-base error by Moldovan pitcher Oleg Gamandi, and Cavan Cohoes, on base after being hit by a pitch.

Moldova (3-2) tied the game in the third. Reliever Pete Sablan walked the first two batters, bringing Breed in from right field to pitch.

Moldova loaded the bases on a scratch hit by the first batter Breed faced and scored on a wild pitch and sacrifice fly before shortstop Cohoes snared a line shot off the bat of Vadim Scripsov and Sloan speared a hot ground- ball just inside the third-base line and threw the runner out. Both runs were charged to Slaban.

KMC took the lead for good in the fifth, scoring when Christian Randolph provoked a rundown play off first base while Joey Beach raced home. Randolph ended up at second base, and Andre Porterfield drove him home.

The All-Stars added a single run in the sixth, then put the game away with a four-run seventh built around a two-run homer to left by Porterfield and Alec Holba&#8217;s two-run double.

Friday&#8217;s winners will play Saturday morning for Europe&#8217;s berth in the Senior World Series next month in Bangor, Maine.