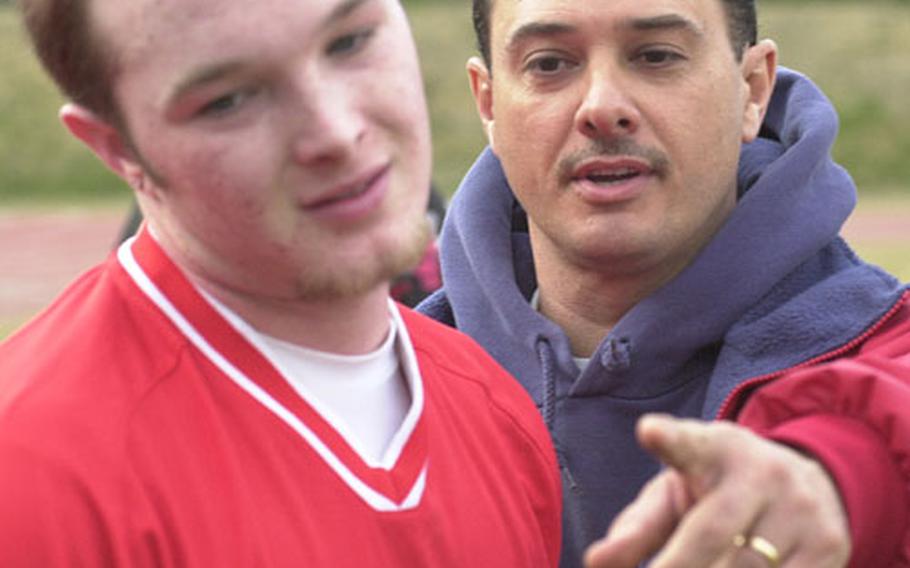 IKEGO HEIGHTS NAVAL HOUSING FACILITY, Japan &#8212; After arching his shot over the head of Robert D. Edgren goalkeeper Nathan Reineke and into the net, Go Yamada pointed a finger at longtime Nile C. Kinnick assistant coach Enrique Cruz and ran over to him.

&#8220;I tried to stay, but I couldn&#8217;t,&#8221; said Cruz, whose departure flight was scheduled around the same time the Devils visited Zama American for another Japan Soccer League contest.

For Cruz, Friday&#8217;s victory over the Eagles capped four years of work with the Red Devils, who were winless the season before he arrived but third in the JSL the past two years. In 2001, Kinnick placed in the top six at the Class AA Far East Tournament.

While Cruz was bidding farewell, the man he assisted for two seasons, Nico Hindie, enjoyed a successful return on Friday, this time at the helm of the Lady Red Devils.

Kinnick&#8217;s Alexis Zukowski punched in two goals, and Robyn Hopp broke a 1-1 tie in the 44th minute by converting the team&#8217;s third penalty kick attempt in the 3-1 victory over Yokota.

Hindie, 31, the son of Department of Defense Education Activity-Europe teachers at Rota Naval Station in Spain, spent five years at Kinnick before returning to Rota, the school he attended from kindergarten through graduation.