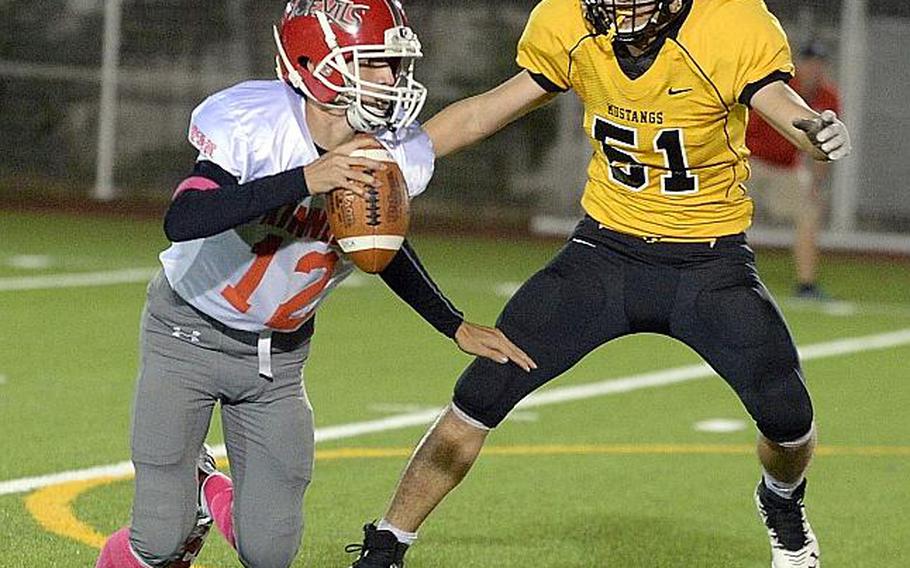 Buy Photo
Nile C. Kinnick quarterback Patrick Kelly took the reins of the Red Devils offense this season after being the understudy for two years and led Kinnick to its first DODEA Pacific Far East Division I football title. (Dave Ornauer/Stars and Stripes)

Life on the football field could not have been much worse for Nile C. Kinnick, especially their new quarterback, Patrick Kelly.

The junior was making his first varsity start on that sultry Sept. 8 afternoon, and faced a 33-6 deficit with 10 minutes, 52 seconds left. On the road. At Kadena, the Red Devils’ biggest rival, which beat Kinnick 10 months earlier for the Division I title.

“I did get a little worried because it was our first game,” Kelly said. “I didn’t know how it was going to affect us and there was this big deficit. But I thought we could do it.”

Treyvion Morton’s rushing touchdown with 7:34 left at least made it seem respectable. But the best was yet to come for Kelly and his heroes.

Just like that, the Red Devils were leading 34-33 with 1:58 left, a lead they would not lose, in a game that Kelly said would “set the tone” for the rest of the season – and showed the Red Devils they had a sure-fire replacement for graduated quarterback Kacey Walker.

“He’s cool and calm as a cucumber,” Kinnick assistant coach Gary Wilson said. “No situation was too big for him. This changed everything for us. We became a passing team.”

For those accolades, Kelly has been named Stars and Stripes Pacific high school football Athlete of the Year.

The Red Devils had to come from behind three times in seven regular-season games.

And they did it with a quarterback who saw minimal playing time in 2017, mostly when Kinnick was far ahead, as Walker, a four-year starter, took most meaningful snaps. Still, Kelly was twice named Kinnick’s junior varsity MVP, so it wasn’t as if he was a greenhorn.

“I knew people were counting on me since Kacey left … I knew people had a lot of faith in me going into the season. I was just trying to live up to the expectations of everybody else,” Kelly said.

Head coach Dan Joley said he had faith from the beginning, even with the Red Devils sporting “the best cast of athletes that may have ever walked the halls of Kinnick” leading to a fast-paced, no-huddle offense that averaged 36.4 points per game.

“His football acumen is incredible,” Joley said, adding that Kelly was given the latitude to read defenses and determine the “best path to success” on each play.

Aside from studying film, “he studies personalities and is a master-level people reader who knows how to manage a crowd, especially a crowd of hungry athletes who want to touch the football.”

They went on to down Kadena 38-20 on Nov. 10 for the Division I title, but it was that first encounter that laid the groundwork for a special season in Red Devil country.

“That was against our toughest opponent and we came back, and that helped us for future games,” Kelly said.