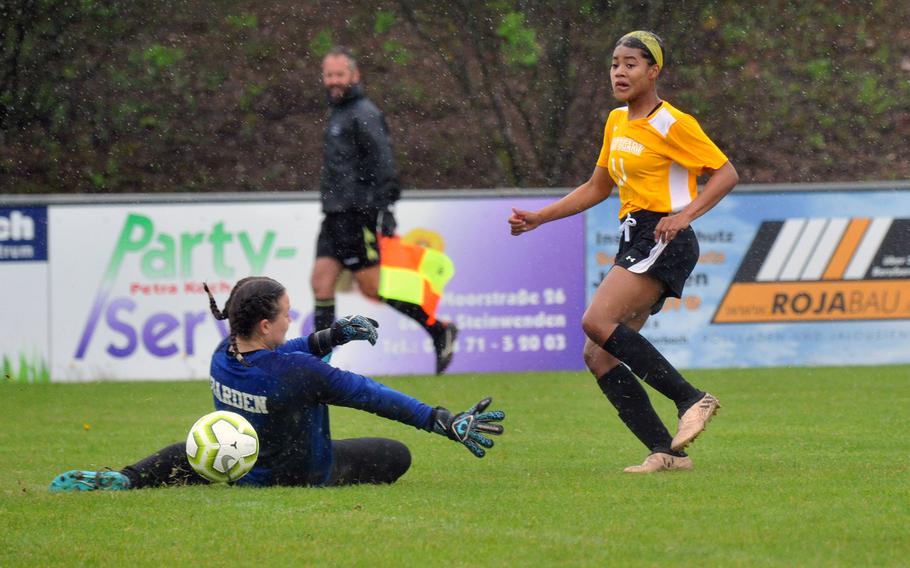 Stuttgart's Victoria Antoine watches her ball head to the goal past SHAPE keeper Mackenzie Barden in a Division I game in Reichenbach, Tuesday, May 21, 2019. The Panthers won the game 4-0. (MICHAEL ABRAMS/STARS AND STRIPES)

Stuttgart's Victoria Antoine watches her ball head to the goal past SHAPE keeper Mackenzie Barden in a Division I game in Reichenbach, Tuesday, May 21, 2019. The Panthers won the game 4-0. (MICHAEL ABRAMS/STARS AND STRIPES) 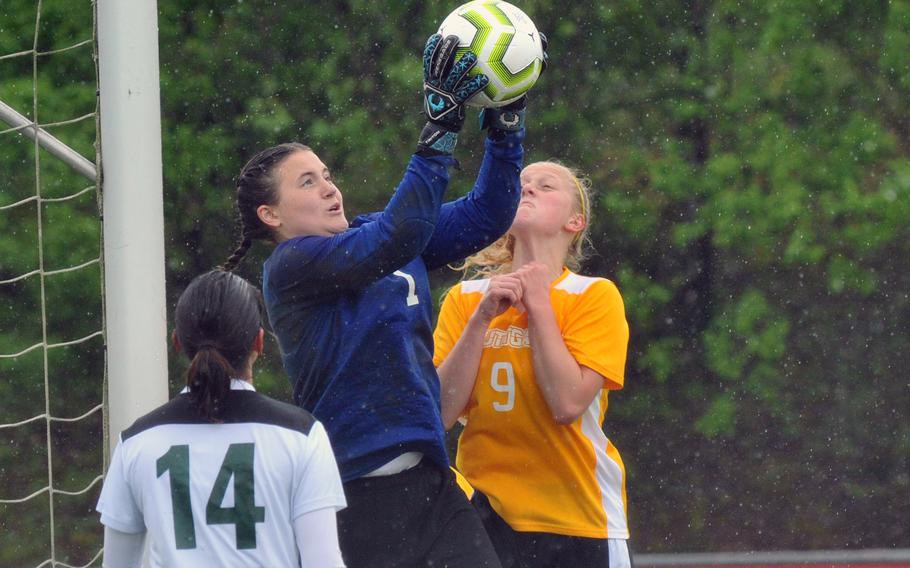 SHAPE keeper Mackenzie Barden pulls down a ball against Stuttgart's Mara Bartell in a Division I game in Reichenbach, Tuesday, May 21, 2019. Watching the action in Stuttgart's 4-0 win is SHAPE's Isabella Ortez. (MICHAEL ABRAMS/STARS AND STRIPES) 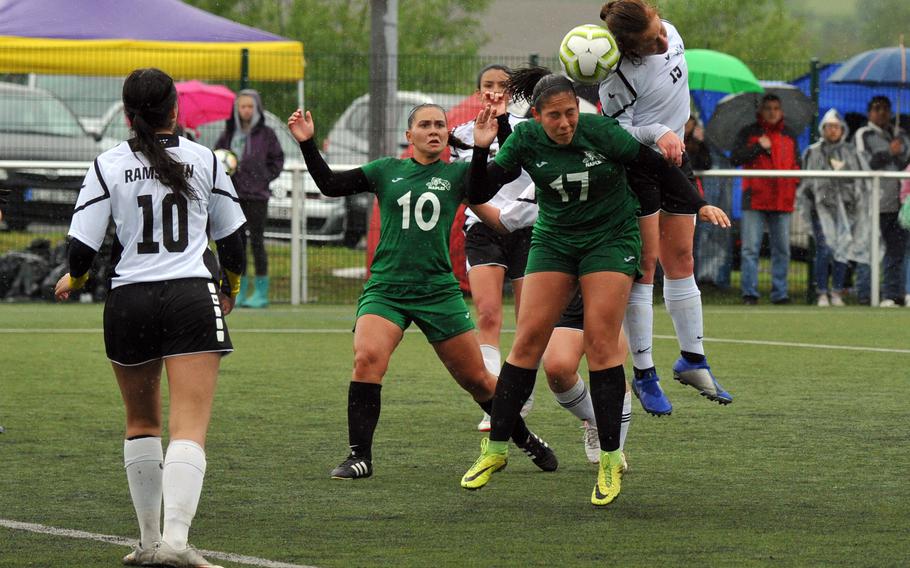 Ramstein's Alexis Tri gets a header over Naples' Thalia Galindo as teammates Karla Robillard, left, and Vanessa Claird watch the action in a Division I game at Reichenbach. Naples won 2-0. (MICHAEL ABRAMS/STARS AND STRIPES) 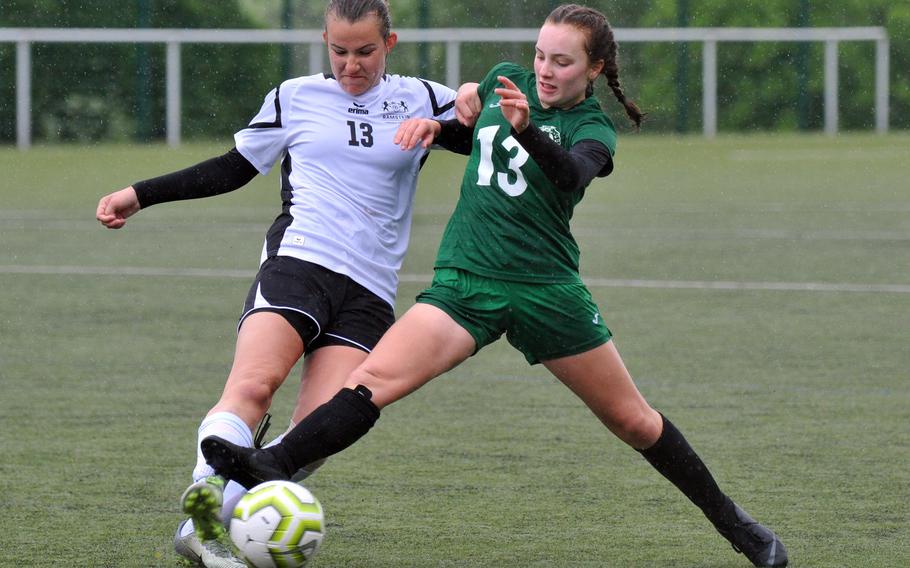 Ramstein's Katherine Ruffing, left, and Naples' Ryleigh Bower fight for a ball in a Division I game at Reichenbach, Tuesday, May 21, 2019. Naples won the game 2-0. (MICHAEL ABRAMS/STARS AND STRIPES) 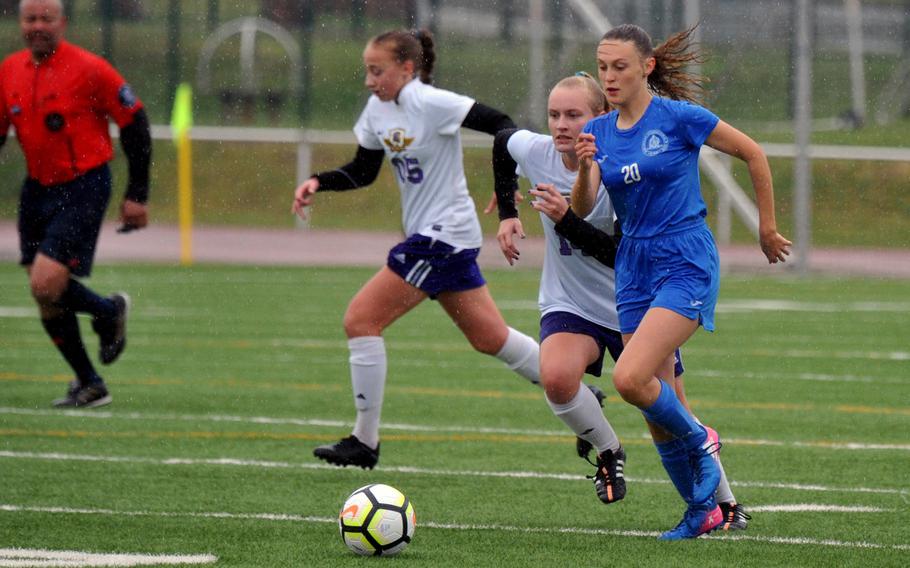 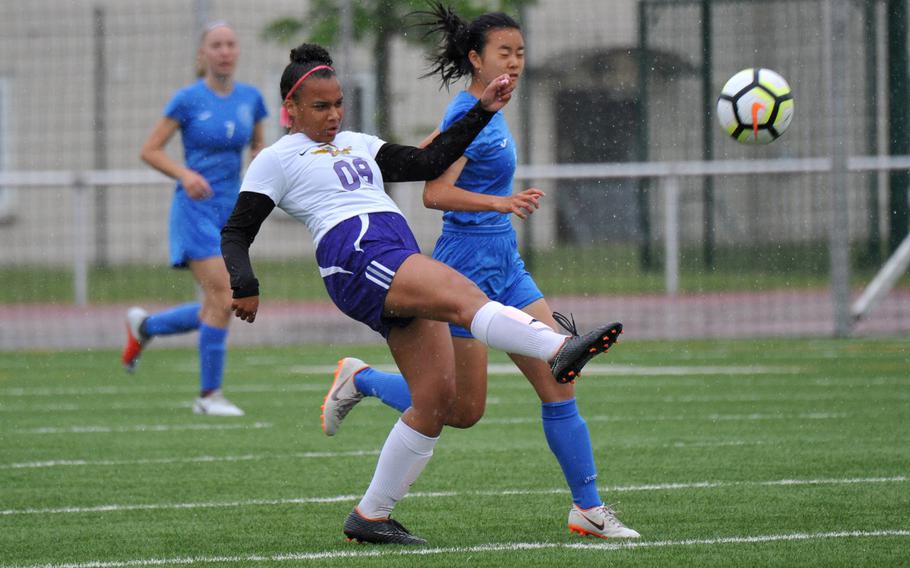 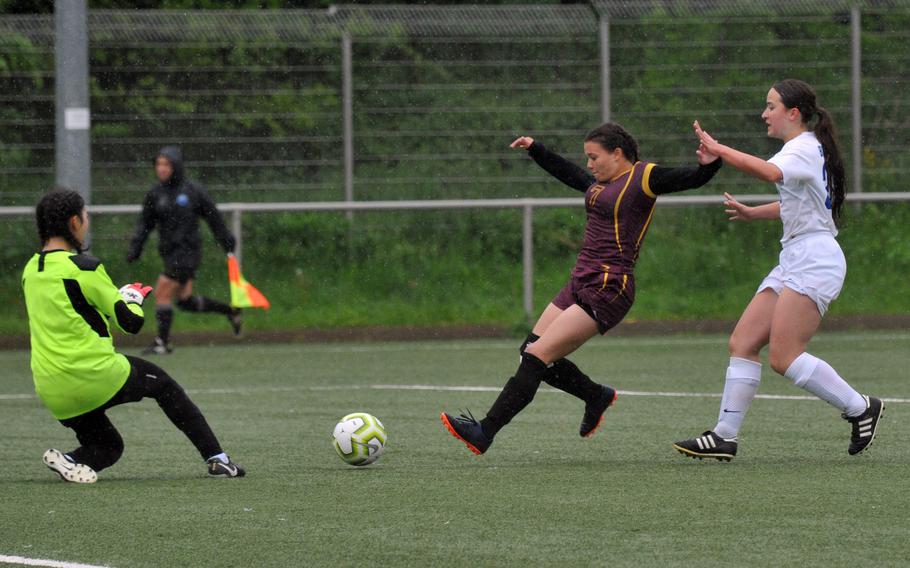 Brussels keeper Lola Khakimova comes out of the goal to stop Baumholder's Kaleena Sais after she got past Victoria Geering. Brussels won the penalty shootout after the game ended in a 0-0 tie. (MICHAEL ABRAMS/STARS AND STRIPES) 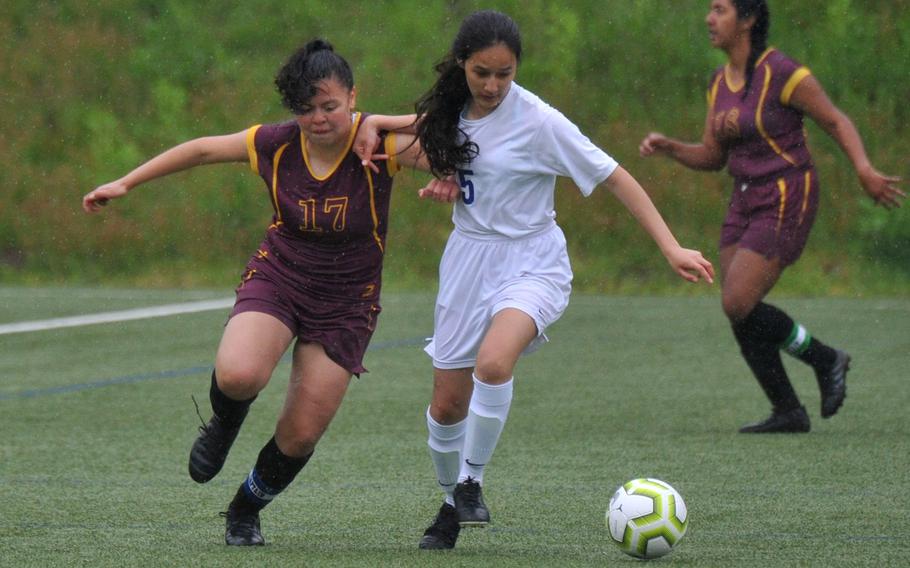 Baumholder's Daniel Valdez, left, and Rano Khakimova fight for the ball in a Division III game at Landstuhl, Tuesday, May 21, 2019. The game ended 0-0 with Brussels winning in the penalty shootout. (MICHAEL ABRAMS/STARS AND STRIPES)

Ten DODEA-Europe girls soccer teams advanced to the elimination round of their respective tournaments Tuesday, withstanding inclement weather and competitive preliminary pools to move closer to a coveted European championship.

The defending Division I champion Stuttgart Panthers continue their burgeoning rivalry with the Wiesbaden Warriors in one large-school semifinal, while the Naples Wildcats and Kaiserslautern Raiders face off in the other.

Aviano, Black Forest Academy, Marymount and Rota are the final four in Division II, with their semifinal matchups still to be determined pending results of Wednesday morning preliminaries.

The Division III championship matchup, meanwhile, was set with the conclusion of round-robin play Tuesday. The Spangdahlem Sentinels will take on the Hohenfels Tigers for the small-school crown.

Division IKaiserslautern 3, Vicenza 1: After two games of not losing, the Raiders got the win they needed.

Kaiserslautern’s morning victory over the fifth-seeded Cougars clinched a semifinal berth for the bracket’s eighth seed, who stayed in contention Monday by forcing 2-2 ties with top-seeded defending champion Stuttgart and fourth-seeded SHAPE.

While Tuesday morning’s win made it official, the Raiders proved they belonged in the division’s final four when they stood toe-to-toe with the reigning champions Monday.

“We scored our first goal (against Stuttgart) and I felt like we had a chance,” Kaiserslautern junior Dezirea Johnson said. “That set our pace for the rest of the tournament.”

The confidence boost from their performance Monday set the stage for Tuesday’s victory, in which Johnson, Chloe Martin and Alaya Lima scored goals and the Raider defense maintained its steady pressure to shut down the Cougars.

“We kept our positivity up,” Johnson said. “Which is what we needed the most.”

Stuttgart notched its second straight shutout Tuesday with a 4-0 rout of SHAPE, ousting the Spartans from the tournament and earning the right to defend their title in the elimination round.

Naples 2, Ramstein 0: The Wildcats claimed their pool’s top berth on a narrow tiebreaker with Wiesbaden.

Naples and the Warriors played to a 3-3 tie on Monday, and both handled seventh-seeded Lakenheath and ninth-seeded Vilseck by matching 7-0 scores. The Wildcats’ two-goal decision over Ramstein gave it the differential edge on Wiesbaden, which beat those same Royals by a 2-1 tally.

That sets up another Stuttgart-Wiesbaden clash, the latest entry in one of DODEA-Europe’s hottest rivalries. Recent classic editions of the series include Wiesbaden’s shootout win for the 2017 title and the teams’ tense 2-2 tie in this spring’s regular-season finale.

Division IIBlack Forest 4, American Overseas School of Rome 1: The top-seeded Falcons clinched a spot in the semifinals with a steady defeat of the tournament’s fifth seed.

BFA has had one of the lightest on-field schedules in the tournament over the first two days. The Falcons had just one game Monday, an 8-1 evening win over Bahrain, and just the match with AOSR on Tuesday. But the Falcons are making the most of their downtime.

“We came early to watch some of the games and just kind of scope out our opponents,” BFA senior Bianca Liberti said. “We look for their strongest players and what their tactics are, if they use the field well.”

BFA’s own use of the field has been outstanding, so far yielding 12 goals over four halves of pool-play games.

Things will pick up for the Falcons on Wednesday. BFA faces second-seeded Marymount, which claimed the pool’s other semifinal berth Tuesday with a 2-0 defeat of Bahrain, to decide the pool’s top seed early Wednesday; that outcome will finalize the matchups for the Division II semifinals, scheduled for 1 p.m. later that same day.

Aviano 4, Rota 2: The opposite pool’s three Tuesday matches packed little intrigue, as the favored Rota Admirals and Aviano Saints had already seized control of the bracket with their efforts a day earlier.

Rota blanked AFNORTH 3-0 on Monday, while Aviano beat Florence 3-0 and edged AFNORTH 1-0. Rota’s 6-0 rout of Florence early Tuesday made it official for the third-seeded Saints and second-seeded Admirals.

Division IIISpangdahlem 3, Hohenfels 0: The Sentinels cruised through what proved to be a preview of Thursday’s European final.

Spangdahlem had no trouble with the five-team round-robin bracket, the smallest field of the event’s six concurrent tournaments. The Division III newcomer outscored its four opponents 9-1 over the course of two days.

This level of dominance was not unexpected for the Sentinels, who won the 2018 DODEA-Europe Division II championship. Realignment shifted Spangdahlem to Division III this school year, installing the squad as immediate favorites to take over a small-school crown left vacant when 2018 champion Alconbury failed to field a girls team. The handful of Dragons girls players joined up with a co-ed squad competing in the boys bracket.