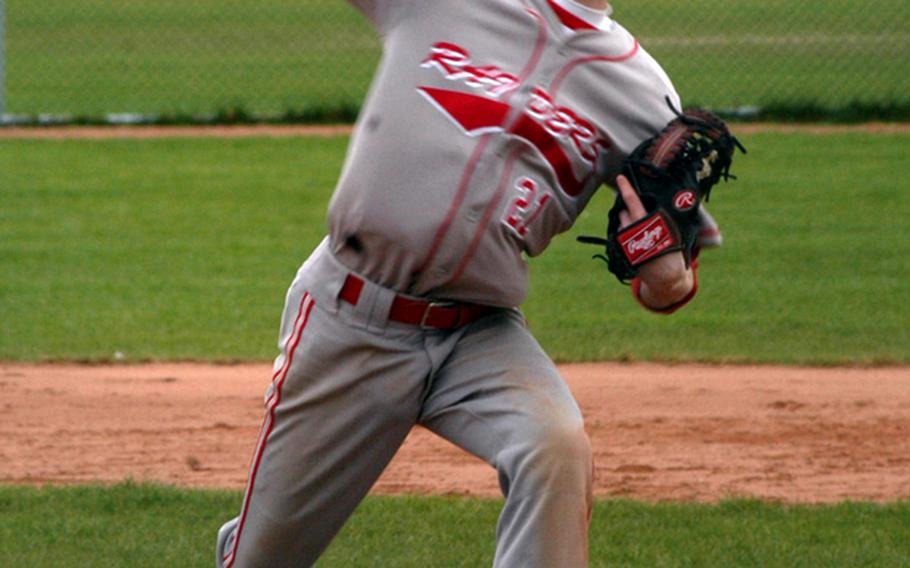 Buy Photo
Winning Kaiserslautern pitcher Aaren Blossom delivers a fastball during game one of a doubleheader against the Lakenheath on Saturday at RAF Feltwell, England. The Raiders won both games 8-1 and 5-1. (David Hodge/Stars and Stripes)

Buy Photo
Winning Kaiserslautern pitcher Aaren Blossom delivers a fastball during game one of a doubleheader against the Lakenheath on Saturday at RAF Feltwell, England. The Raiders won both games 8-1 and 5-1. (David Hodge/Stars and Stripes) 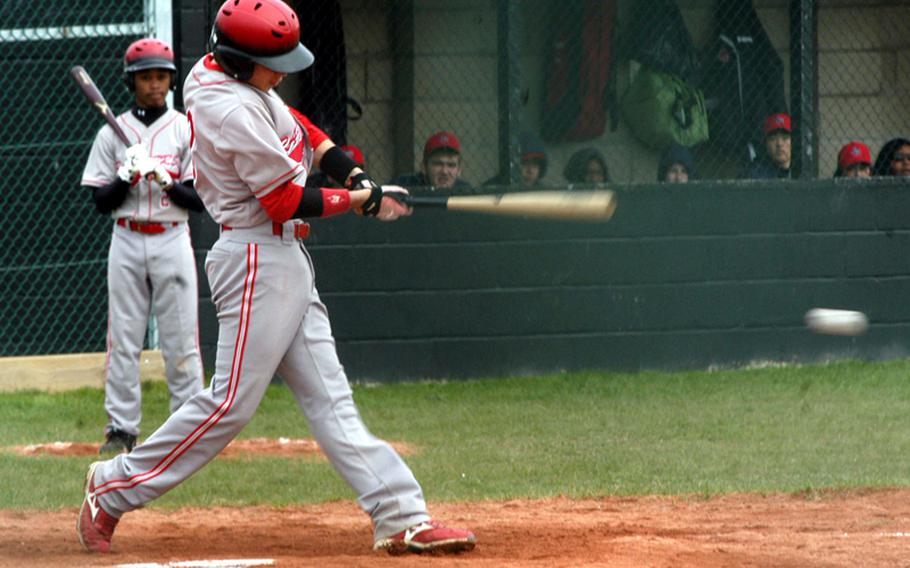 Buy Photo
Kaiserslautern's Ian Acosta drives the ball down the third base line during the first game of a doubleheader against Lakenheath on Saturday. The Red Raiders won both games, a day after sweeping a pair from Alconbury. (David Hodge/Stars and Stripes) 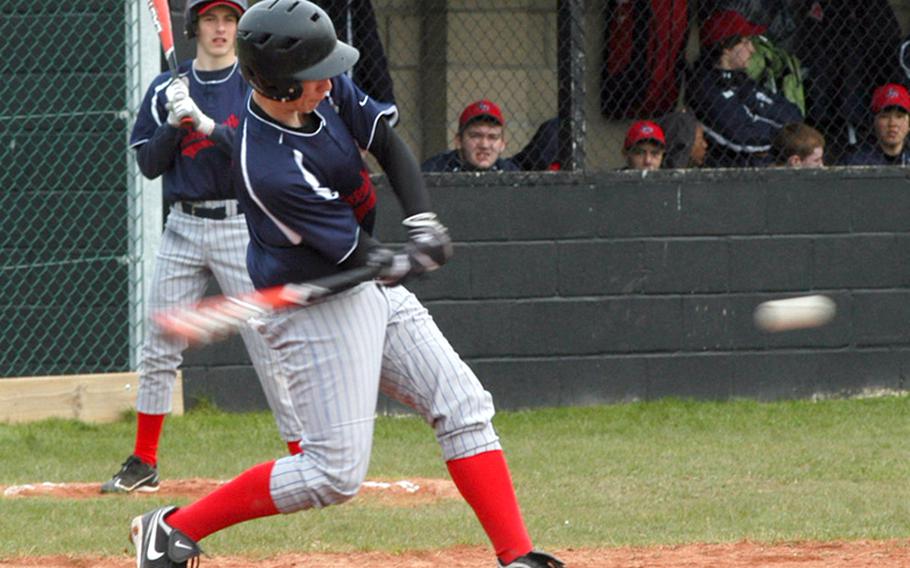 Buy Photo
Lakenheath's Caleb Maftei swings during the first game of a doubleheader against Kaiserslauternon on Saturday. The Lancers dropped both games, with Maftei as the losing pitcher in the opener. (David Hodge/Stars and Stripes) 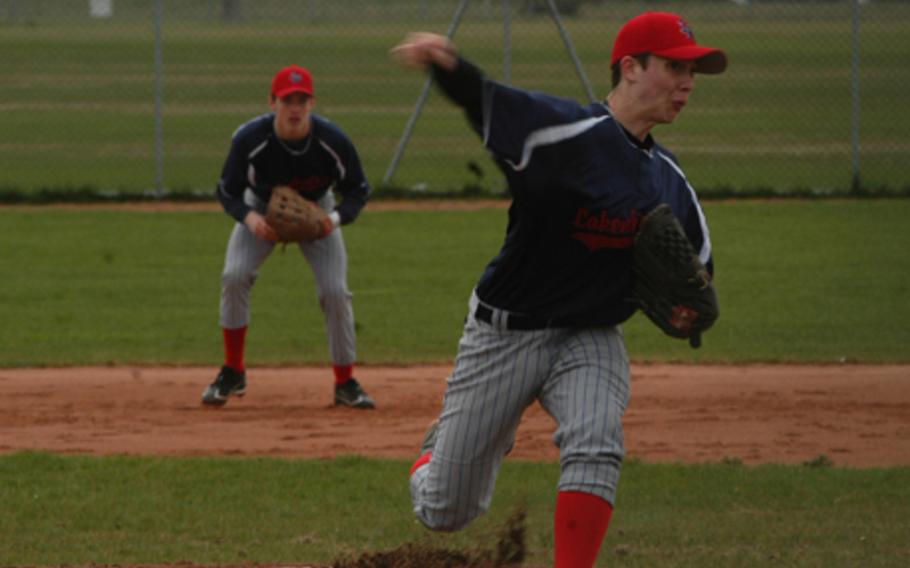 Buy Photo
Lakenheath pitcher Caleb Maftei releases the baseball during the first game of a doubleheader against Kaiserslautern on Saturday. Kaiserslautern won, with Maftei taking the loss, and then went on to win the second game to complete the sweep. (David Hodge/Stars and Stripes) 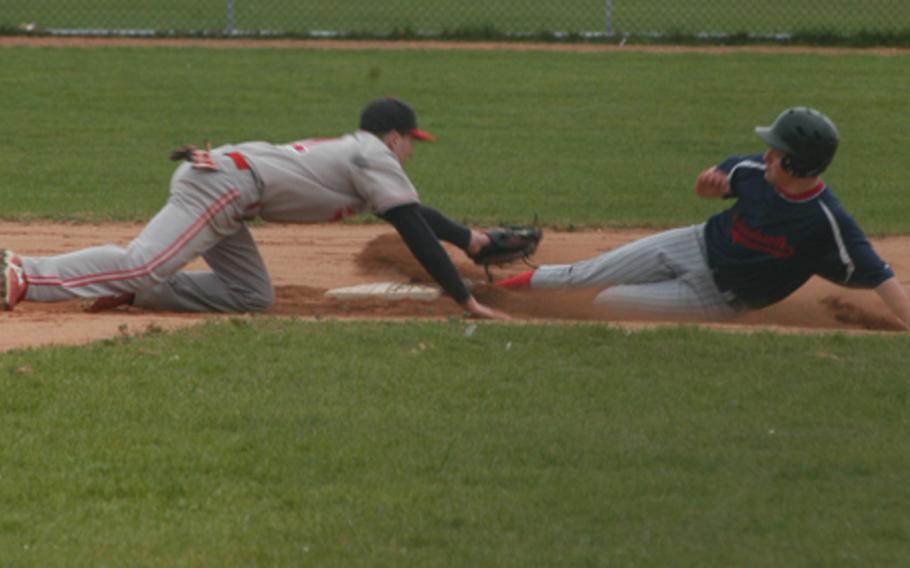 Buy Photo
Lakenheath's Titus Adamson slides into second baseahead of the tag by Kaiserslautern's Aaren Blossom during the first of a Kaiserslautern sweep on Saturday. (David Hodge/Stars and Stripes) 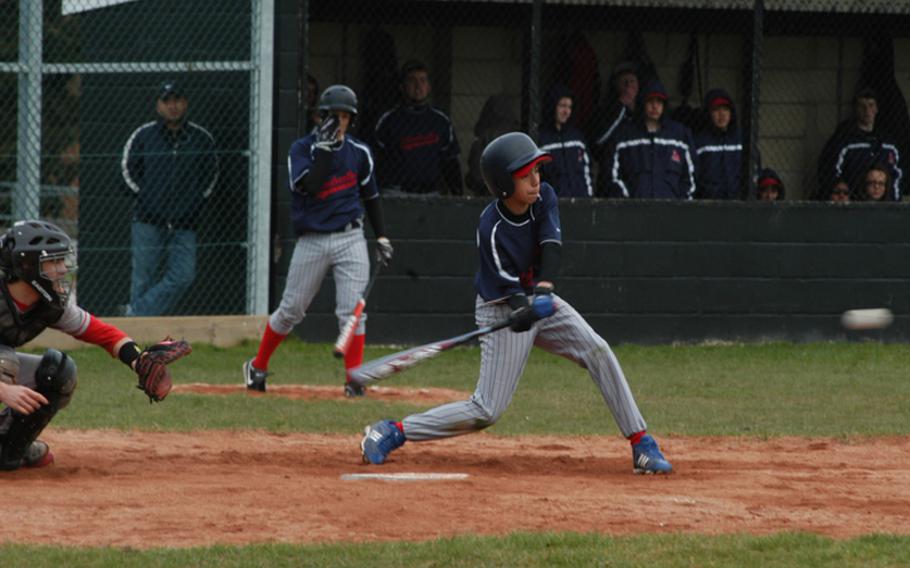 Buy Photo
Lakenheath's Izzy Leon starts his swing during the first game of a doubleheader against Kaiserslautern on Saturday. The Lancers lost both games, 8-1 and 5-1. (David Hdge/Stars and Stripes)

RAF MILDENHALL, England &mdash; Kaiserslautern opened the 2011 DODDS-Europe baseball season with a pair of doubleheaders and came away 4-0.

The Red Raiders swept Lakenheath, 8-1 and 5-1, on Saturday to finish off the perfect trip, which started with two wins Friday over the Alconbury Dragons, who are playing baseball for the first time this season.

Kaiserslautern coach Tom Burriss said his team is using the opening games to work on basic skills like base running, throwing, pitching and hitting.

&ldquo;We&rsquo;re a young team with only two seniors,&rdquo; he said, adding later, &ldquo;The kids are learning the game.&rdquo;

Several pitchers took advantage of the lopsided wins against Alconbury, 24-0 and 12-3, to get in some time on the mound. Caleb Hayes and Chris Jastrab recorded wins and relievers Aaren Blossom and Kenen Bryant also saw some action.

Against Lakenheath, it was more of the same with Blossom and Jastrab recording wins. Blossom threw a one-hitter in the first Lakenheath game by tossing about 50 pitches, said Burriss, who has coached at K-town since 2003.

Lakenheath coach John Gilmore is also focused on building a baseball program. After 14 years of coaching the school&rsquo;s softball team, Gilmore said the change in scenery is a good move and he&rsquo;s looking forward to the season.

&ldquo;Our outlook is to build as the season progresses,&rdquo; he said. &ldquo;We&rsquo;re working to be ready for the Europeans, and we need the experience.&rdquo;

On a cold and very windy Saturday, the Lancers were no match for the Red Raiders. There were several throwing and fielding errors, which Gilmore said were not unexpected because many of his players are young and have no prior experience. There are five seniors on the squad, but Gilmore said only one or two of them have any experience. He started four freshmen in the first game.

&ldquo;It&rsquo;s all part of building this program,&rdquo; he said.

Caleb Maftei and Justin Henderson were the losing pitchers for Lakenheath.

Kaiserslautern 24-12, Alconbury 0-3: Friday at Alconbury, Justin Thibodeau collected the first hit and scored the first run in Alconbury baseball history, but aside from his milestones the Dragons will cherish few memories of their first baseball outing in school history.

Alconbury, which enrolls around 140 high-school students, is participating in DODDS-Europe baseball for the first time this season. For their inaugural opener, the schedule had the Dragons playing Kaiserslautern, enrollment 650 or so, and the Red Raiders rode their enrollment size and experience to the lopsided victories.

Acosta doubled twice in Game 1 and went a combined 5-for-7 on the day. Blossom was 2-for-3 in the nightcap.

Next up for Alconbury is a trip to Bitburg on Saturday. K-town moved on to a Saturday doubleheader at Lakenheath. The Red Raiders are to play again this Saturday at Ramstein.