Jeffrey Toelstede of Germany&#39;s Baden-Württemberg team bunts what turned into a round-tripper in the first inning. (Ben Bloker / S&S)

Jeffrey Toelstede of Germany&#39;s Baden-Württemberg team bunts what turned into a round-tripper in the first inning. (Ben Bloker / S&S) 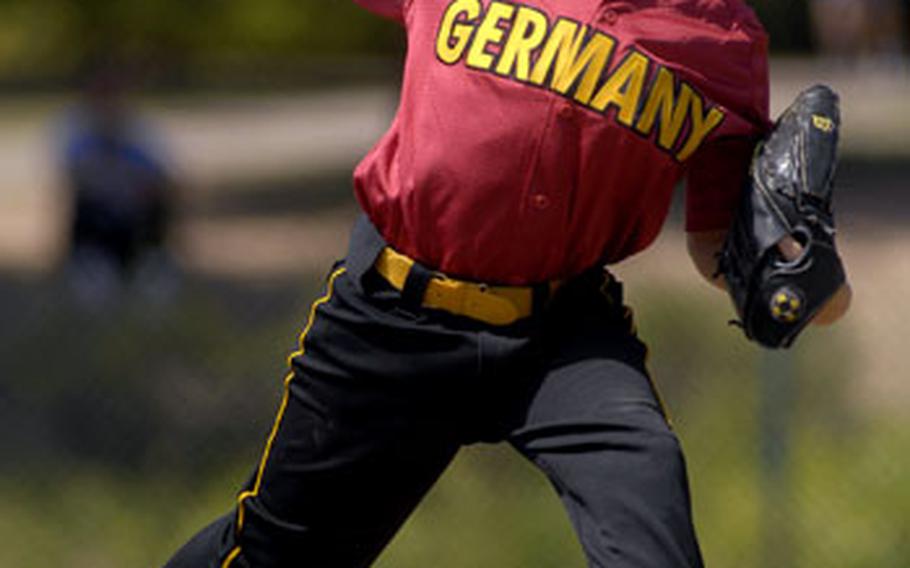 RAMSTEIN AIR BASE, Germany &#8212; The roadblock that the Kaiserslautern Military Community&#8217;s 11-12-year-old All-Stars encountered Wednesday against German national champion Baden-W&#252;rttemberg became a dead end Thursday when they lost for the second time in the best-of-three playoffs.

The 10-0 defeat ended KMC&#8217;s season and put Baden-W&#252;rttemberg in Little League Baseball&#8217;s European Regional in Kutno, Poland, as the champions of Germany. At stake is Europe&#8217;s berth in next month&#8217;s Little League World Series in Williamsport, Pa.

Pitcher Kevin Kane went the distance for the Germans, allowing just one hit and striking out 13 of the 21 batters he faced during the six-inning contest. For good measure, he went 3-for-3 from his No. 3 spot in the batting order, driving in three runs with a single, double and solo home run.

"Today was a good day for me," Kane said matter-of-factly as Baden-W&#252;rttemberg celebrated its victory.

Sal Vargas tripled down the right-field line with two outs in the fourth for KMC&#8217;s only hit, but he was stranded when Lane struck out the next batter.

Other than that, KMC had just two base runners: Joshua Neal reached in the first inning when Baden-W&#252;rttemberg third baseman Kevin Ludwig couldn&#8217;t come up with a corkscrewing shot off the end of his bat; and Connor Novotny reached in the fifth on an error.

KMC worked its way into a hole at the outset. Baden-W&#252;rttemberg&#8217;s leadoff batter, Jeffrey Toelstede, laid down a bunt in front of the plate to open the bottom of the first and Novotny pounced on the ball cleanly, but threw it down the right-field line. Toelstede was able to round the bases before KMC could corral Novotny&#8217;s throw.

Baden-W&#252;rttemberg added two more runs in the inning on consecutive singles by Lukas Metz, Kane and Kevin Ludwig and a sacrifice fly by Cedric Dilling. The winners scored single runs in the second and third, the latter on Kane&#8217;s towering fly ball over the center field fence, before posting a crushing five-run fifth.