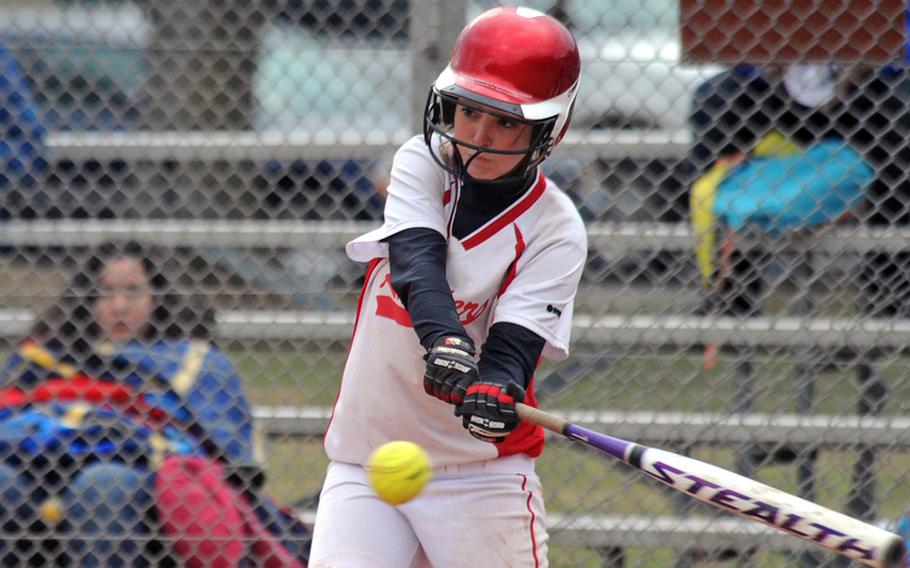 Buy Photo
Kaiserslautern's Lexus Quesada gets ready to connect for a RBI single in the second game of a home doubleheader against Lakenheath on Friday. (Michael Abrams/Stars and Stripes)

Buy Photo
Kaiserslautern's Lexus Quesada gets ready to connect for a RBI single in the second game of a home doubleheader against Lakenheath on Friday. (Michael Abrams/Stars and Stripes) 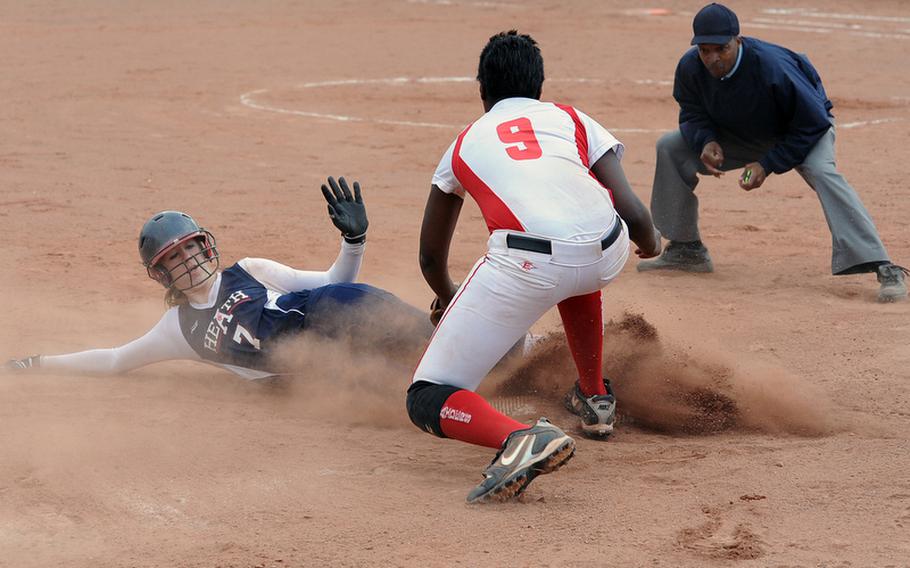 Buy Photo
Lakenheath's Lexi Knupp slides safely in to third under Deyza Mason's tag in the second game of a doubleheader against Kaiserslautern, Friday in Kaiserslautern. The home team won both games. (Michael Abrams/Stars and Stripes) Buy Photo
Lakenheath's Natasha Butler connects during the second game of a doubleheader against Kaiserslautern. Visiting Lakenheath dropped both games to the home team Friday afternoon. (Michael Abrams/Stars and Stripes) 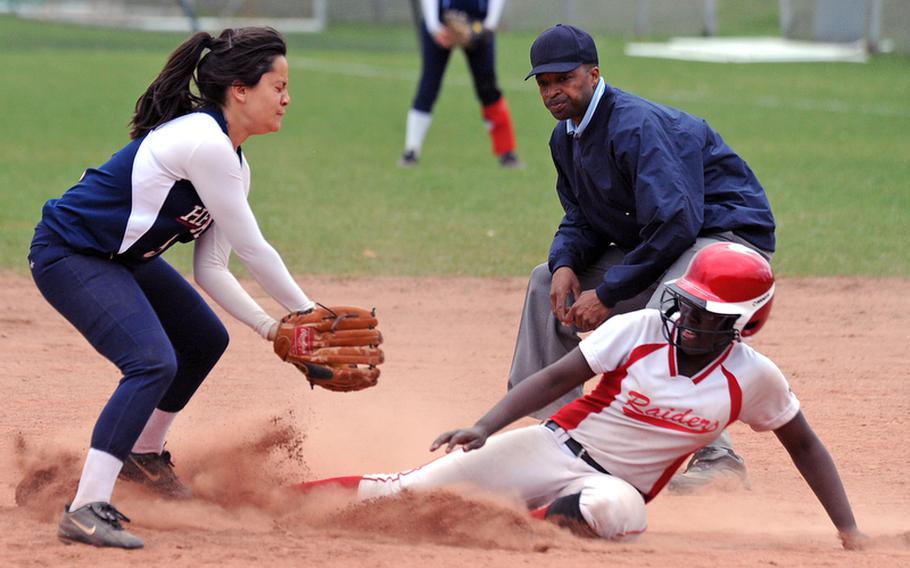 Buy Photo
Kaiserslautern's Deyza Mason slides in to second before Lakenheath shortstop Mariya Rivera can put on the tag. Kaiserslautern swept a home doubleheader from the Lancers on Friday afternoon. (Michael Abrams/Stars and Stripes)

KAISERSLAUTERN, Germany &ndash; A few things changed Friday for the Kaiserslautern Lady Raiders&rsquo; softball team: they were playing at home, on a weekday and against a fellow Division I team.

But that was all that was different for K-town, which swept a doubleheader by big margins for the third time in three outings this season. The Lady Raiders downed visiting Lakenheath 20-0 and 24-6 Friday on a chilly but dry afternoon.

&ldquo;I had my team to back me up,&rdquo; said K-town pitcher Lauren Hawkins, who pitched all five innings of the opener and all three of the nightcap. &ldquo;We have a strong defense and we&rsquo;re pretty strong around the plate.&rdquo;

The Lady Raiders flexed their offensive muscle from the beginning Friday. In Game 1, in which scoring officially ended when Melissa Bonano&rsquo;s two-run double down the left-field line in the bottom of the fifth inning made the score 11-0 and invoked the school system&rsquo;s 10-run rule, Hawkins allowed just four hits while striking out 11 and walking none.

&ldquo;Mostly fastballs,&rdquo; she said of her pitch selection, &ldquo;and a screwball on the outside corner. It depended on how they set up.&rdquo;

Although Hawkins officially was an 11-0 victor in her team&rsquo;s fifth official shutout in five tries this season, K-town continued to bat in the fifth until Lakenheath coach Greg Thomas indicated &ldquo;no mas,&rdquo; after nine more runs had scored and just one Lady Raider had been retired. K-town hit two home runs, a two-run shot by center fielder Reagan McCurn and a three-run drive by Michelle Bonano, in the fifth.

K-town sent 10 batters to the plate in the first inning of Game 1, and pushed five runs across the plate. Melissa Bonano&rsquo;s run-scoring triple was the loudest shot of the frame, and Saige Isla, maintained her 1.000 season batting average with a two-for-two effort in the opener.

In Game 2, K-town batted first and again batted around, this time in all three frames played. The Lady Raiders sent 11 batters to the plate in a six-run first, 12 to the plate in the seven-run second, and 18 to the dish in a 13-run third.

Lakenheath pitchers walked 14 K-town batters and hit two more, with 12 of those who walked and one of the hit batsmen coming around to score. Isla was one-for-three in the nightcap, but still has yet to be retired on 2012. She reached base on errors twice.

Lakenheath did manage to dent the official scoring column against K-town, which came into Friday&rsquo;s doubleheader with a team earned-run average of 0.00, with two runs in the bottom of the first in Game 2.

Hawkins said finally playing at home after season-opening road trips to SHAPE and Baumholder made a nice change.

&ldquo;It was kind of cool,&rdquo; she said about playing on a weekday. &ldquo;Some of the teachers brought their classes by to cheer us. It was pretty awesome.&rdquo;