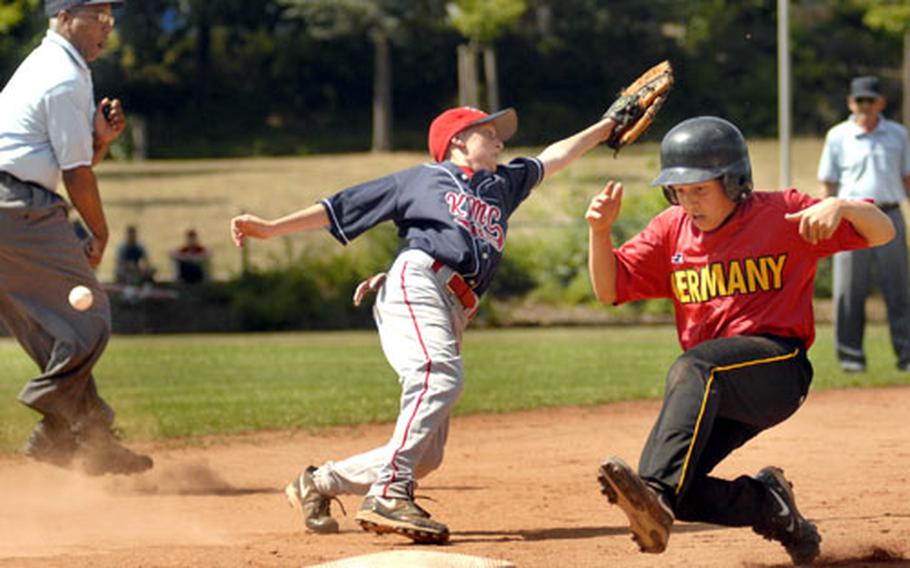 A wild throw zings past Sal Vargas of Kaiserslautern as Cedric Dilling of Germany&#39;s Baden Württemberg squad reaches third base Wednesday at Ramstein Air Base. Dilling scored on the play. (Ben Bloker / S&S)

A wild throw zings past Sal Vargas of Kaiserslautern as Cedric Dilling of Germany&#39;s Baden Württemberg squad reaches third base Wednesday at Ramstein Air Base. Dilling scored on the play. (Ben Bloker / S&S) Pascal Winkler, relying mainly on a fastball made to seem faster by crafty use of his breaking pitch, gave up 12 hits and all seven KMC runs in his 5&#8197;2/3 innings.

"My fastball and curve were my best pitches," Winkler said through his father after the game, adding that he would like to have gone the distance if the 85-pitch limit hadn&#8217;t stopped him.

Winkler struck out six and walked one before yielding to reliever Cedric Dilling with KMC&#8217;s 11-12-year-olds down to their last out and a runner on third. Dilling, whose solo homer in the top of the inning padded the German national champs&#8217; lead, fanned Chase Morash to end the game.

"He&#8217;s very calm," Baden-W&#252;rttemberg coach Geoff Atwater said of Dilling. "He was a starter for us in the Germany tournament, but we&#8217;re using him in middle relief and as a closer in this series."

Baden-W&#252;rttemberg&#8217;s real damage came in a five-run fourth after KMC had taken its only lead, 4-3, in its previous at-bat. David Schmidt stroked a two-run, inside-the-park home run for the biggest blow of the frame for the Germans. Schmidt&#8217;s drive down the left-field line just eluded the diving Tyler Pecht and rolled to the fence.

Left-hander Joshua Neal, one of the heroes of KMC&#8217;s 2-0 sweep of Stuttgart-Wiesbaden in last week&#8217;s German-American playoffs, took the loss. He allowed six runs, four of them earned, in his 3&#8197;1/3 innings, striking out seven and allowing five hits.

Neal went 3-for-3 at the plate, stroking two singles and a double. He drove in Tyrus De Witt, who also had three hits, with the seventh run for KMC in the bottom of the sixth and final inning.

Game 2 is scheduled for 2 p.m. Thursday at Ramstein&#8217;s Donnelly Park. A Baden-W&#252;rttemberg victory will send the Germans to the European Regional July 31-Aug. 9 in Kutno, Poland. A KMC victory will force a decisive Game 3 on Friday in Mannheim.