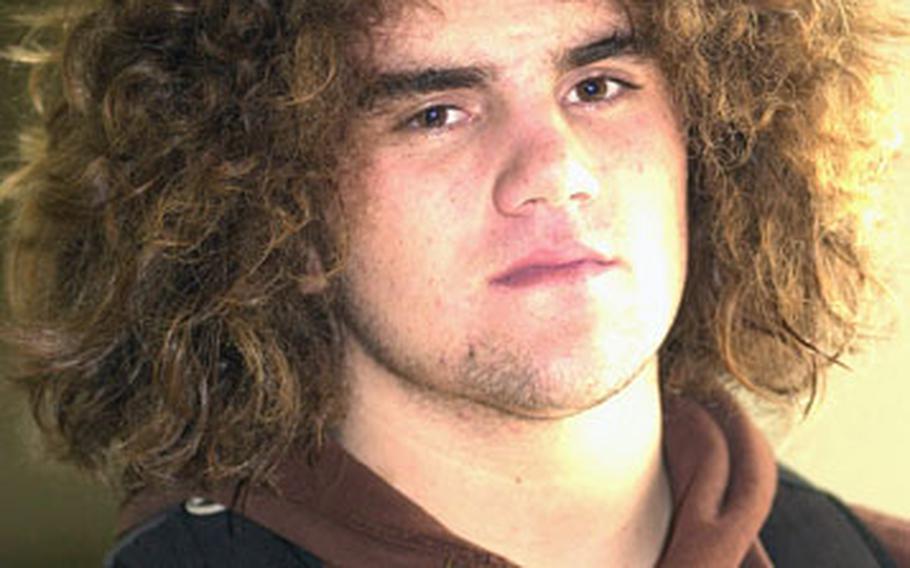 Ted Awana is wrestling for the first time after being a standout athlete for Kadena in football and soccer. (Dave Ornauer / S&S)

KADENA AIR BASE, Okinawa &#8212; Ted Awana has already made his mark in two sports. A muscular senior, Awana has been a stalwart on the football team for two years, and has backstopped the Panthers soccer team to two gold medals and one silver the past three seasons.

So what is he doing attempting a go at a sport he&#8217;s never done before, donning a singlet and headgear and going to the mat as a member of Kadena High School&#8217;s wrestling team?

Call it his admiration for a particular coach. Perhaps the desire to stay in shape and steeling his mental approach in preparation for his senior soccer season. Following in the footsteps of predecessors. Or just wanting a new challenge. Awana says it&#8217;s all those rolled into one.

&#8220;Coach Schrock has always been one of my favorites,&#8221; Awana said of Steve Schrock, who&#8217;s coached the Panthers wrestlers on and off since 1997 and served as offensive coordinator of a Kadena Islanders football team that won the Okinawa Activities Conference title in 2004 and lost the Rising Sun Bowl 50-6 to Yokota.

&#8220;When he asked me to wrestle, I couldn&#8217;t tell him no,&#8221; Awana said, adding that two of his old football teammates, Grady Pennell and Cole Maxey, now at Trinity International in Illinois, &#8220;used to talk about how much fun wrestling was.

&#8220;And I&#8217;m always up for something,&#8221; Awana said of taking on a new sport &#8212; one involving rigorous conditioning, with which he&#8217;s familiar, but also the difficulty of learning technique, moves, concepts and intricacies totally foreign to him.

Learning enough moves to make him successful in relatively short order will involve &#8220;a lot of discipline, in all factors,&#8221; Awana said. &#8220;This is one of the easiest sports to capitalize in and be capitalized on. I&#8217;ll have to work hard this season to be the best at my weight class.&#8221;

Despite his being a novice, already Schrock and his longtime assistant Jordan Collins see the potential for Awana to succeed.

&#8220;He&#8217;s the kind of athlete Cole Maxey was,&#8221; Schrock said of the first Department of Defense Dependents Schools wrestler to win gold medals in Europe and the Pacific, for Kadena in 2004 and Ramstein High in Germany last year, en route to earning DODDS-Europe Athlete of the Year honors.

As a football linebacker and fullback, Awana &#8220;has the natural ability,&#8221; said Collins, who wrestled and played football for Seoul American in the early 1990s and now flies KC-135 Stratotankers at Kadena.

Schrock calls Awana coming out for wrestling a &#8220;win-win&#8221; situation, for himself and the team.

With enough practice and hard work, Schrock feels Awana can enjoy the same success as Maxey.

While continuing to learn and grow under Schrock&#8217;s and Collins&#8217; tutelage, Awana says he gains more discipline and fire-testing for the soccer season, when he hopes his Panthers will avenge their double-overtime loss to Christian Academy In Japan in the Class AA title match.

Collins only wishes that Awana had done this a year ago.