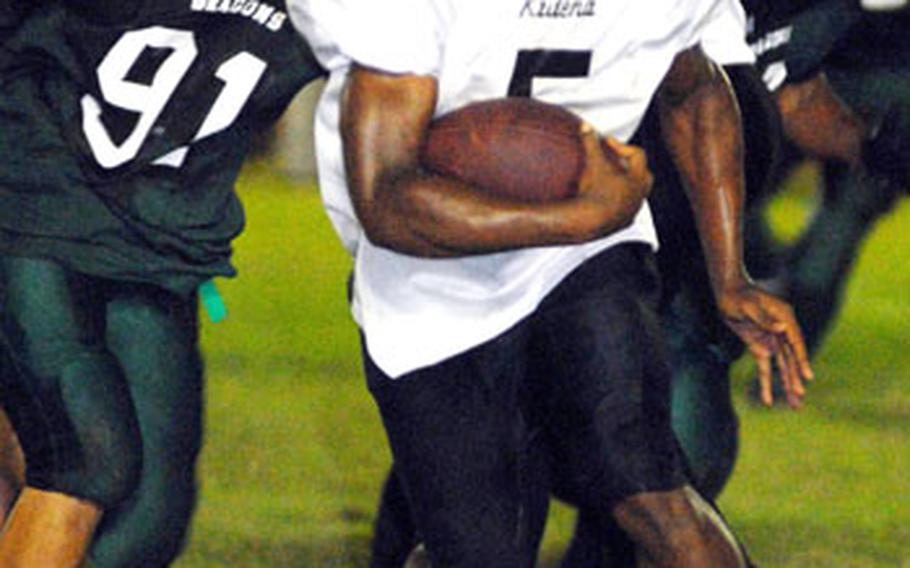 Kadena running back Brandon Harris (5), a senior who leads the Panthers with 372 yards on 53 carries, will take the field Saturday at Seoul American trying to help the Panthers with their second straight Far East Class AA crown in a rematch of the 2006 title clash, which the Falcons won 12-6 in overtime. (Dave Ornauer/S&S)

To hear the coaches discuss it, those games mean nothing now. Most of the players from those two clashes, including rushing champions David Smalls of Seoul and Sean Shattuck and Ernest Carr of Kadena, are gone, leaving each team chasing the unfamiliar.

"Anything that happened before, you can throw out," Falcons coach Julian Harden said. "These are two different teams than they were. We&#8217;re as close as you can be to being equal. Everybody doesn&#8217;t know much about each other."

"It&#8217;s not like a revenge feeling," Kadena coach Sergio Mendoza said of the notion of wanting payback for the overtime defeat. "We understand the challenges we have to face. &#8230; We&#8217;ll use the last time as a learning experience and prepare better, try to build on those things."

Saturday&#8217;s championship game, which kicks off at 2 p.m., shapes up as a battle of the two most stingy defenses in the Pacific.

It will be up to Falcons running back Trinadai Stansel (556 yards, 52 carries last four games) and the Panthers&#8217; four-pronged attack of Brandon Harris, Lamar Stevens, Stan Schrock and Vince Coronado (1,151 yards total offense) to find ways to pierce those defenses.

"Their program gets better and better," Harden said of Kadena. "You never know how good you are until you compete with somebody on a different level."

"When you think of games with Seoul the past two years, they&#8217;ve been tough games," Mendoza said. "A class coach. The kids fight hard."

Harden said the game should hinge on which team can put the brakes on its opponent and how well it takes care of the football.

"We&#8217;ll make some adjustments and try to do something to slow them down," Harden said. "It will come down to who makes the fewest mistakes."