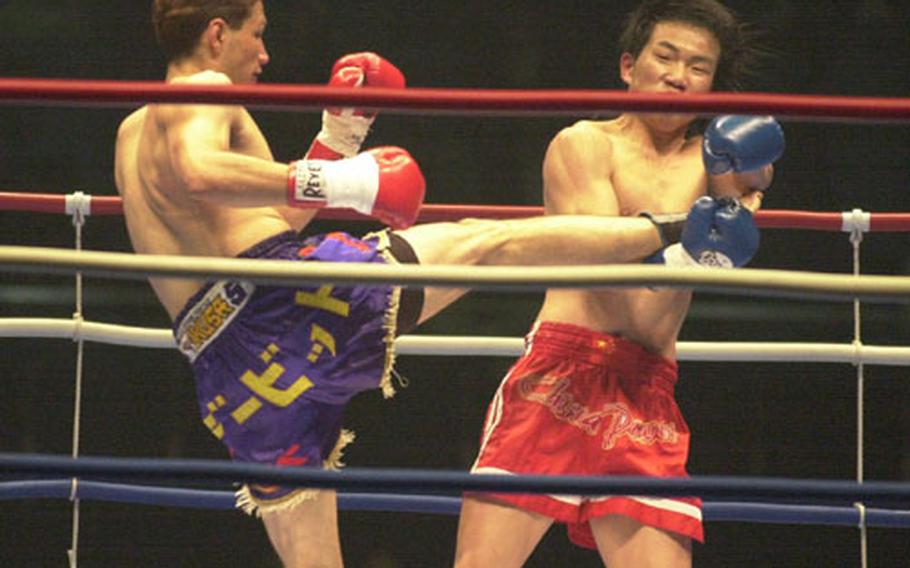 Senior Airman David Archuleta, from the 733rd Air Mobility Squadron at Kadena Air Base, scores a kick to his opponent, Kang En from China, at a K-1 fighting match in Tokyo Wednesday. (Jim Schulz / S&S)

For Archuleta, the Universal Kickboxing Federation&#8217;s junior welterweight titleholder, it was a chance to showcase his stuff on one of the biggest stages in K-1, a highly popular, lucrative sport that mixes champions from various sanctioning bodies.

Archuleta (18-2-1 with 12 KOs) lost his November debut but rebounded nicely on Wednesday against the pesky En, a welterweight champion in Sanda, China&#8217;s version of kickboxing, who was fighting in K-1 for the first time.

After ducking a high kick to start the bout, Archuleta taunted the lighter En with a mock dance in the ring.

En didn&#8217;t appear too thrilled by the stunt. Using a series of grappling maneuvers, he repeatedly tossed Archuleta to the mat and later dazed the American with a right hand to the head.

That changed in the second round, when Archuleta became the aggressor, landing several kicks and knocking En down with a foot to the head as the bell sounded. The referee waved off the knockdown, claiming it came after the round.

But the damage had been done. Unleashing another flurry of low kicks to En&#8217;s legs, Archuleta sent him to the canvas three more times, picking up the TKO at the 2:30 mark of the third round.

Archuleta&#8217;s next kickboxing fight is slated for June 6 in Tokyo but he remains highly optimistic about his future in K-1, saying that negotiations are under way for additional bouts.

Wednesday&#8217;s performance certainly did nothing to dampen his prospects.