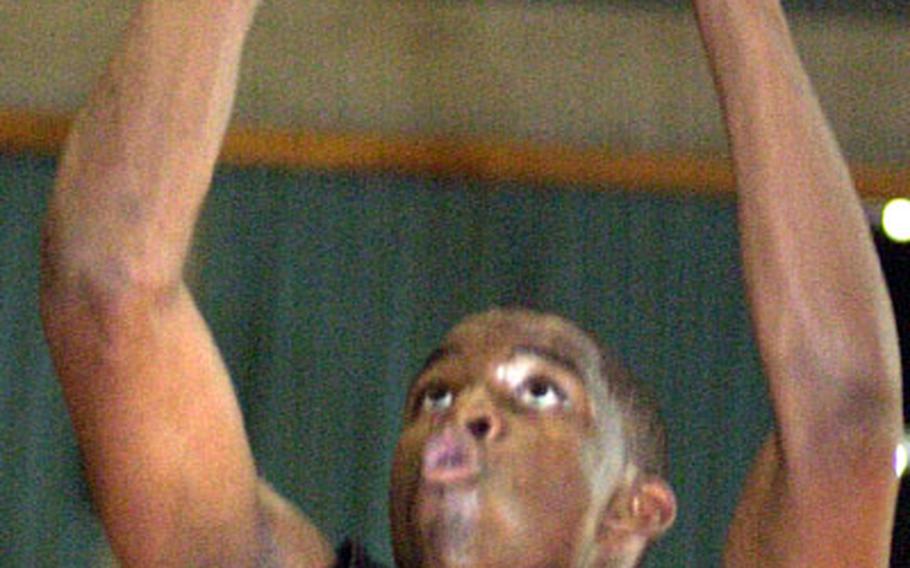 Kadena Panthers junior forward Z&#39;aire Jackson goes up for a shot against the Maehara Dolphins. Jackson has averaged 26.1 points and 17.6 rebounds per game this season. (Dave Ornauer / S&S)

KADENA AIR BASE, Okinawa &#8212; During the flight home to Okinawa from the Hong Kong basketball tournament, Z&#8217;aire Jackson stewed.

His Kadena Panthers had performed well during the event on Thanksgiving weekend,. but not as well as they had hoped. They finished third.

It&#8217;s also the play Bliss expected from Jackson since he arrived for the 2003-04 season when his father, Air Force Master Sgt. Anthony Jones, was transfered to Kadena&#8217;s 353rd Special Operations Group from Shaw Air Force Base, S.C.

Jackson played a season at Crestwood High, in Columbia, S.C., before arriving at Kadena and immediately securing a spot in the lineup.

The Panthers fared well last season, finishing 15-12, including a season sweep of Kubasaki, but they did not place in last February&#8217;s Far East Class AA Tournament.

He set about changing that in Kadena&#8217;s first game this season, a 108-64 romp over Naha High, a Japanese team. In just two quarters, Jackson had 27 points and 14 rebounds.

Then came the astounding totals he posted in the past two games, which he attributes to his attitude about playing inside &#8212; it&#8217;s his personal domain.

Of his 54 rebounds in the past two games, 35 came off the offensive glass, including 23 against Maehara.

Kubasaki coach Chris Sullivan is sufficiently impressed with Jackson&#8217;s performance thus far, calling him &#8220;probably the most dominant inside player in the whole region.

But Jackson has aspects of his game to work on too, his coach said.

Jackson knows being 6-3 might make him a giant in the Pacific, but it also would make him among the shorter players on a stateside college team. Realizing his basketball future might hinge on outside shooting, he is practicing it more.

More immediately, Jackson and Schmidt said they believe Kadena has a legitimate shot to win its first Class AA title since 1999 and make its first center court appearance since 2001.