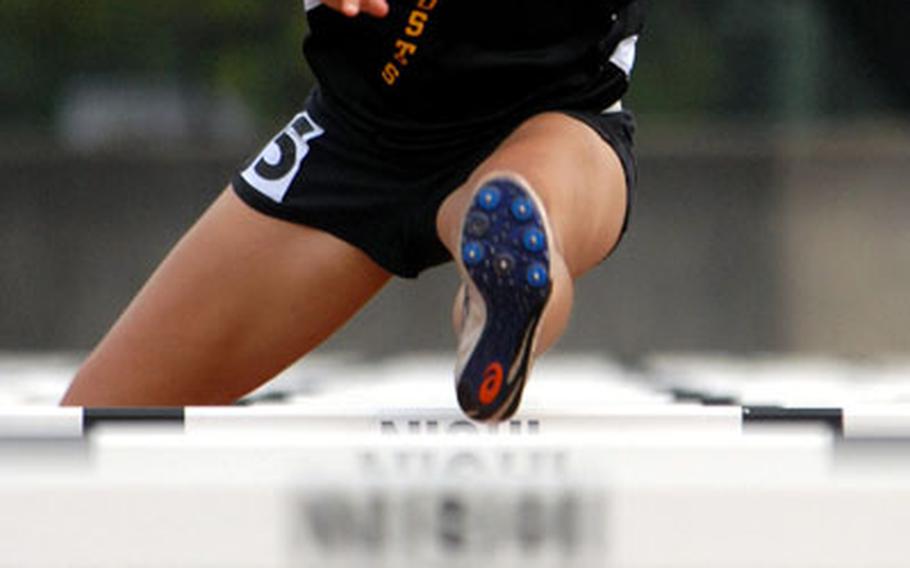 Lorien McKinney of Kadena charges around the curve in the girls 200. (Dave Ornauer / S&S) 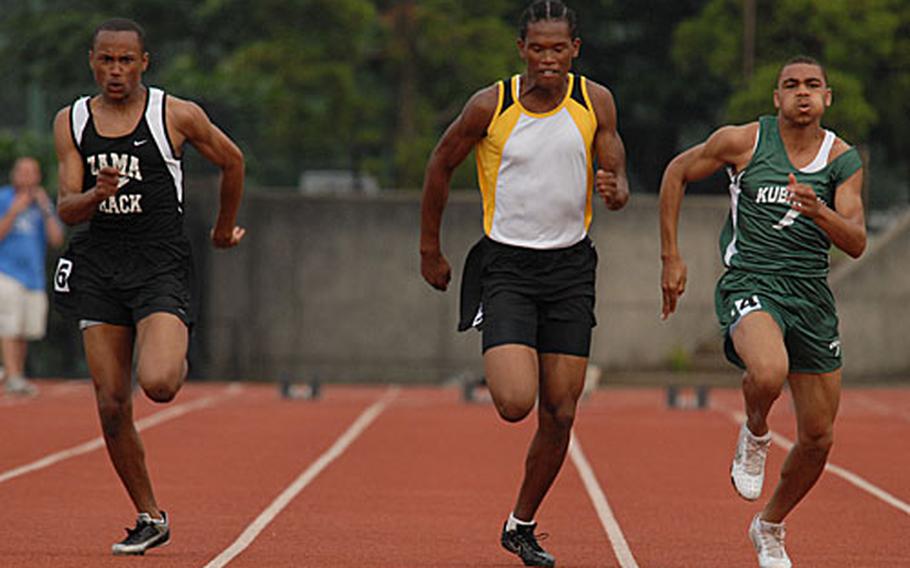 Miguel Rodriguez of Zama American, Manny Duran of Kadena and Charles Vinson Jr. of Kubasaki charge to the tape in the 100 meter dash. (Dave Ornauer / S&S)

TOKYO &#8212; A record-breaking day for Kadena senior sprinter Manuel Duran began with an unusual question &#8212; and compliment &#8212; from a rival coach.

Hours after that talk early Saturday, Duran spent his final day in a Panthers uniform rewriting the record book, as he has done so many times the past two years.

He broke the 21-year-old Japan long-jump mark and won three other gold medals, two of them region bests for the 2007 season, in the Kanto Plain Association of Secondary Schools Invitational Track and Field Meet at Kinuta Park Sports Center.

Duran leaped 22 feet, 6 inches, breaking by 4 inches the mark set by William Allen of Yokota in 1986. It was only the second time a Japan-area jumper surpassed the 22-foot barrier.

Duran also was involved in the day&#8217;s biggest upset. Though he stumbled out of the blocks, Duran rallied to finish second in the 100 to Sungjun Son of Christian Academy In Japan, 11.3-11.5 &#8212; in a race in which Kubasaki senior Charles Vinson Jr. lost for the first time since the first Okinawa meet in March.

Duran&#8217;s performance headlined a day in which three Japan-area records fell and 13 time and distance season-bests were posted, on a Saturday that began rainy, turned sunny, then back to cloudy by the conclusion of the seven-hour meet.

Saturday&#8217;s meet was the first of all DODDS-sponsored programs in Japan, Japan international schools and the Seoul Track Club in a Kanto Plain setting, in which all teams could medal and score points. Previously, Kadena and Kubasaki entered as invited, non-scoring guests.

CAJ won the boys title with 99 points, with Kadena second (90). American School In Japan captured the girls crown with 154 points; Kubasaki was a distant second with 113.

Among other region top performances, Zama American sophomore Andrew Quallio capped an unbeaten season in the 2-mile run, clocking a 10:04. He had lost a mile race the previous week in the Kanto Plain championship, and he said it &#8220;definitely&#8221; motivated him.

The two later hooked up in a memorable mile battle, trading the lead throughout the race until Coon nipped Quallio at the tape, 4:39.34-4:39.51.

The latter saw the final performances in Dragons uniform by senior Kyera Tennyson and freshman Julie Monti and sophomore Lia Monti, who will transfer to Virginia this summer. &#8220;They wanted to leave an impression,&#8221; Burns said. joked coach Kevin Madden of something that happened Friday on the train from Narita International Airport to Yokota.