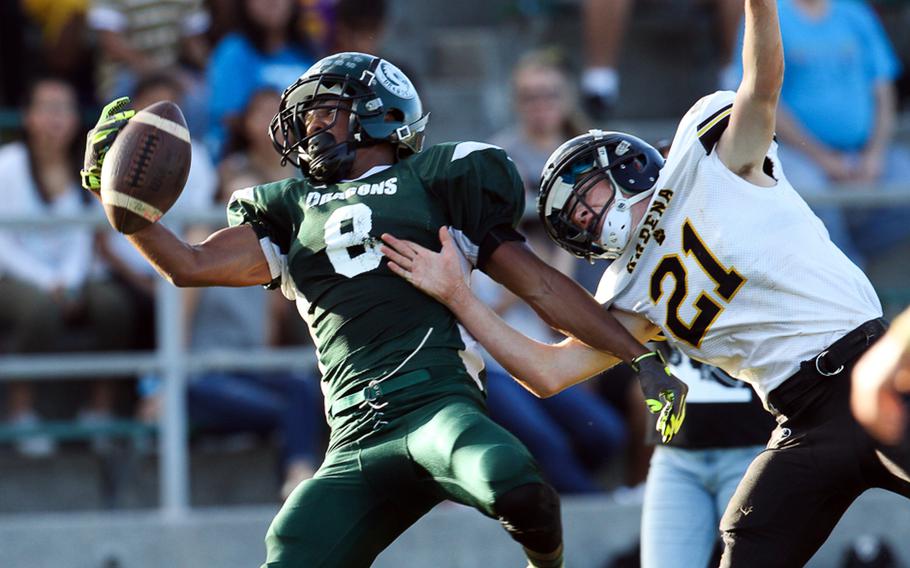 Kubasaki wide receiver Jacob Green tries to get the handle on a pass as Kadena defensive back Dan Frazier defends. (Brian R. Barksdale/Special to Stars and Stripes)

Kubasaki wide receiver Jacob Green tries to get the handle on a pass as Kadena defensive back Dan Frazier defends. (Brian R. Barksdale/Special to Stars and Stripes) Repeat? Sah-weet! Kadena coaches and players gather round the banner. (Miranda Fino/Special to Stars and Stripes) 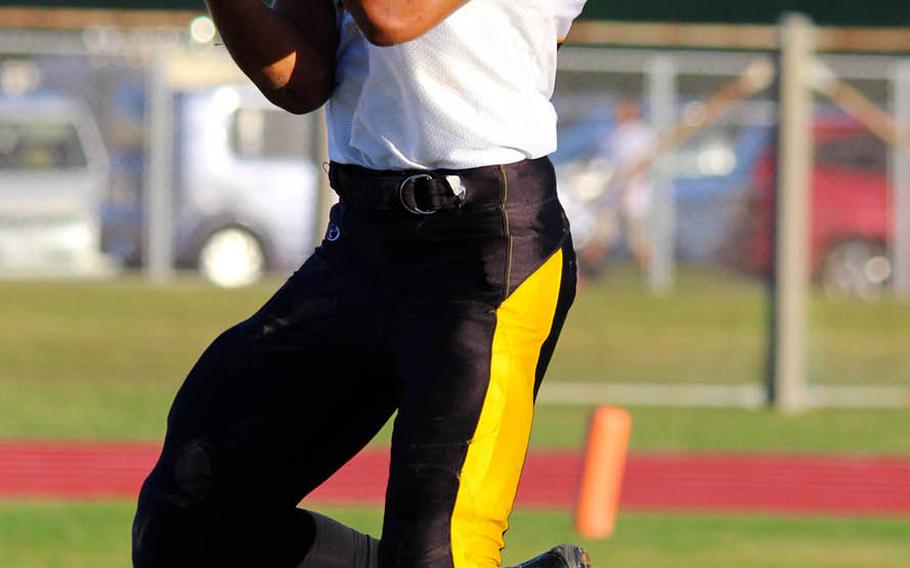 Kadena's Donte Savoy hauls in a kickoff and gets set to run a 14-yard return against Kubasaki. (Mary Obsuna/Special to Stars and Stripes) 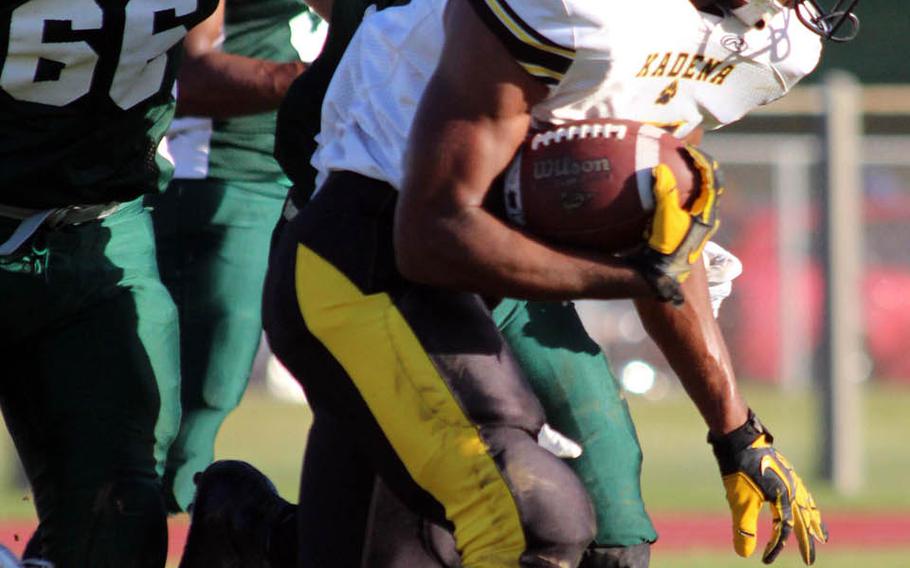 Kadena's Jason Bland tries to break away from a gang of Kubasaki defenders. (Miranda Fino/Special to Stars and Stripes) Kadena RB Jason Bland tries to shrug off the tackle of Kubasaki's Bobby Riegert. (Mary Obsuna/Special to Stars and Stripes) 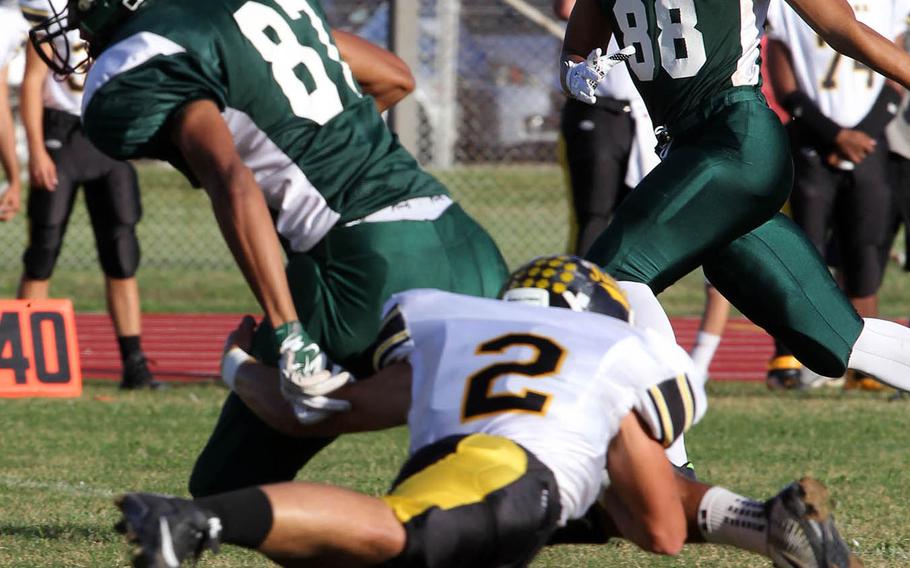 Kubasaki WR Miles Mahlock tries to slither through the tackle of Kadena's Hunter Corwin. (Mary Obsuna/Special to Stars and Stripes) 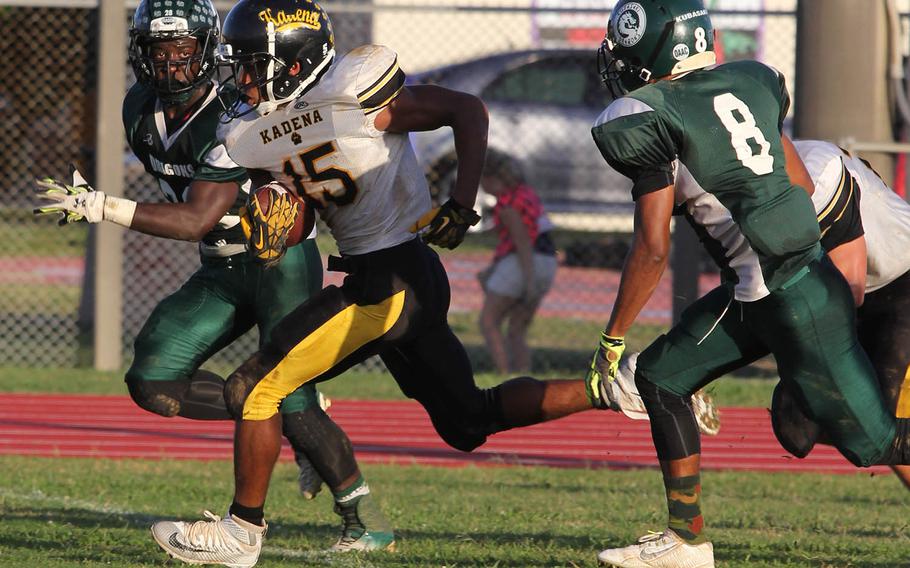 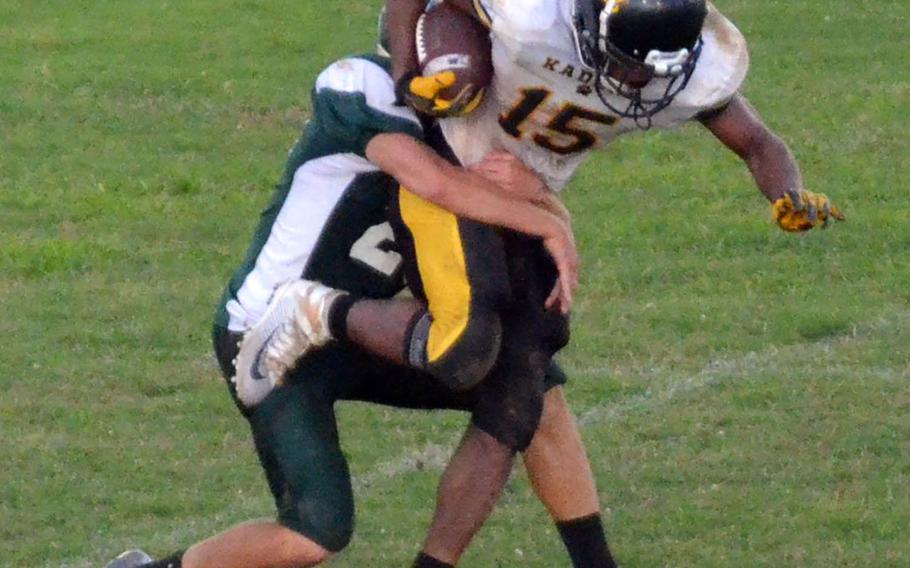 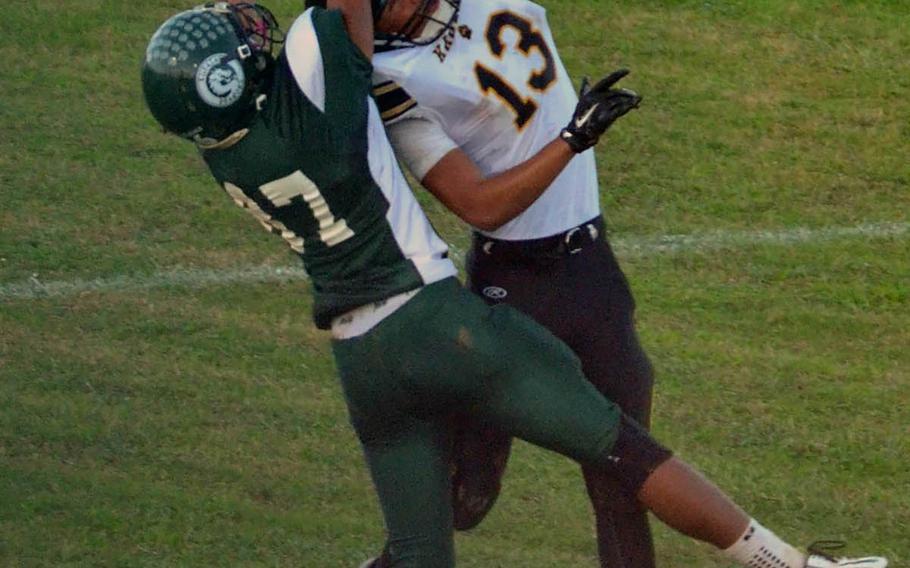 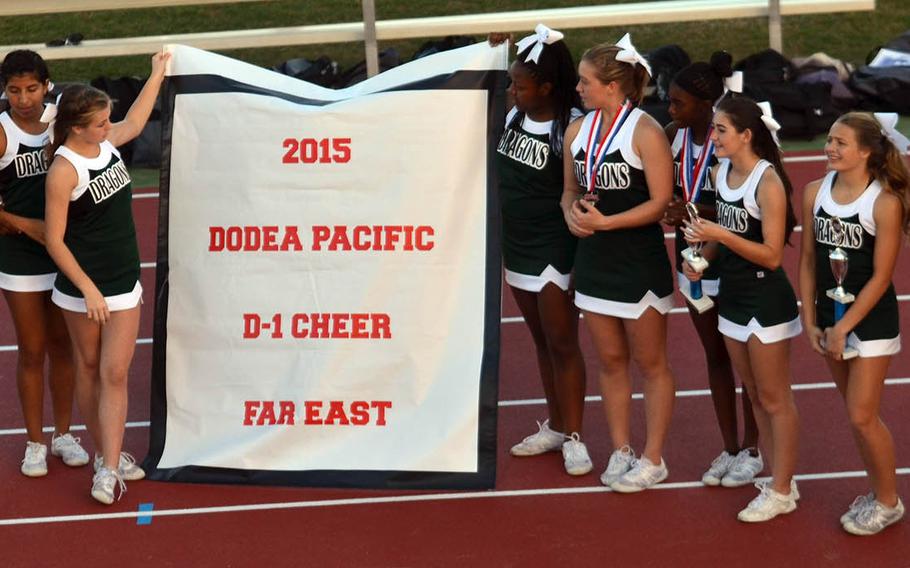 Halftime saw Kubasaki champions in other sports displaying their title wares, including Dragons cheerleading, which won its first Far East Division I banner since 2005. (Dave Ornauer/Stars and Stripes) 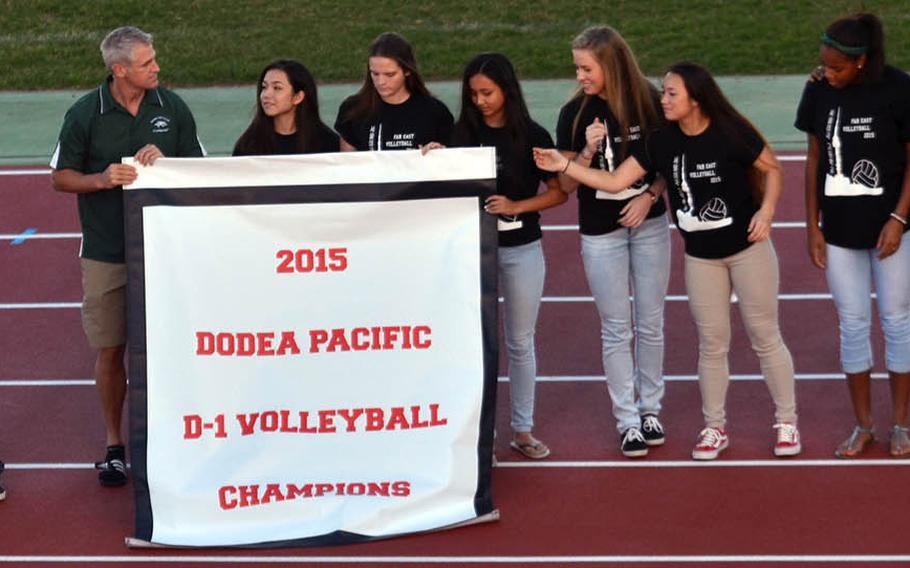 Halftime saw Kubasaki champions in other sports displaying their title wares, including Dragons volleyball, which repeated its Division I championship of a year ago. (Dave Ornauer/Stars and Stripes) CAMP FOSTER, Okinawa – Less than 30 seconds remained in a game that had already seen plenty of drama and lead changes.

Kadena faced third-and-goal at the 10 following two incomplete passes, and Jason Bland went up to coach Sergio Mendoza with an idea.

“Let’s go ‘I.’ I’ll run over them,” the senior running back told Mendoza, who called for a play sending Bland off-tackle right.

Through the right side Bland went, breaking five Kubasaki tackles before dragging three Dragons defenders with him into the end zone.

Three incomplete Dragons passes later, the clock ran out and the celebration began, a sea of fans clad in Panthers black and yellow streaming onto the field to join a scrum of players feting their second consecutive Far East Division I championship.

“I just told my coach I was going to run hard and drive it in,” Bland said. “I had some good blocking from my line. We were just going to drive it in and win the championship. Two in a row. Back to back.”

The touchdown capped a drive that began at Kadena’s 20 with 3:13 left. “We were just thinking … the game’s not over, so we shouldn’t stop,” Panthers junior lineman Siulagisipai Fuimaono said. “The game’s never over until the clock runs to zero. We had to keep going. And we did.”

“He’s an amazing running back in a pantheon of great Kadena running backs,” Mendoza said after his Panthers captured their Pacific-best fifth D-I title, a string fueled by a long line of star backs.

It was the capper to a season that began with losses in two of the the first three games - both to Kubasaki - but ended with Kadena winning its last five games. And it was the second straight year Kadena won the D-I title at Kubasaki’s Mike Petty Stadium, following the 41-27 win last year.

“I can’t tell you, from losing those first two games, how we went about rebuilding this team,” Mendoza said. “They learned how to love each other through adversity. Those boys have my heart for the rest of their lives. This is probably the most satisfying of all the championships.”

It was a Kadena victory that featured a Panthers quarterback playing with a separated left shoulder. Cody Sego played all but one series, getting his only two completions in nine attempts on the game-winning drive.

“I just had to push through and it was all good,” Sego said, adding that the shoulder, injured in Kadena’s 30-19 win last week over American School In Japan, hurt “sometimes. But I knew if I pushed through that we would win.”

Bland scored all three Kadena touchdowns and finished with 295 yards on 36 carries. That gave him Pacific D-I-leading totals of 20 touchdowns and 1,759 yards on 229 attempts.

That offset a Far East title-game record 343 passing yards by Kubasaki senior Isaiah Johnson, who went 20-for-30 and tossed two TD passes, a 36-yarder to Miles Mahlock and a 40-yarder to Javohn Journigan.

After a scoreless first quarter, the lead changed hands five times. Kadena got most of its yards on the ground and Kubasaki in the air, with the Dragons outgaining the Panthers 367-366. And each team finished 6-2 overall on the season.

Triston Puckett intercepted two passes for Kubasaki. For Kadena, Donte Savoy and Ahmad Carter each recovered fumbles and Sego picked off a pass from his free safety spot.

“They made some big plays at the end when they needed to make them,” Kubasaki coach Fred Bales said. “My heart hurts with (his players), I want to cry with them, but I’m certainly proud of them. We scored enough to win. They made the plays at the end that beat us.”