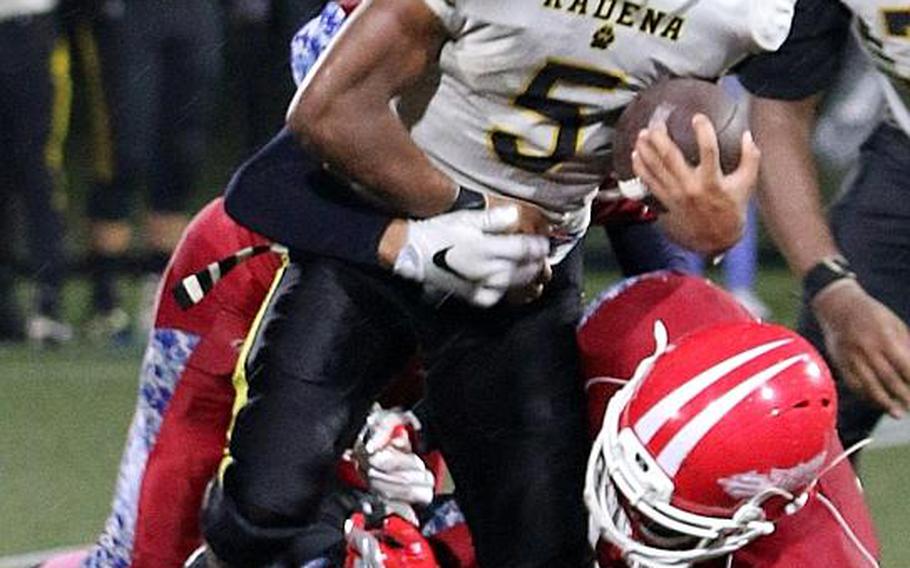 Kadena running back Eric McCarter slithers through the tackle of a pair of Red Devils defenders. (Emmanesta Stovall/Special to Stripes)

Kadena running back Eric McCarter slithers through the tackle of a pair of Red Devils defenders. (Emmanesta Stovall/Special to Stripes) 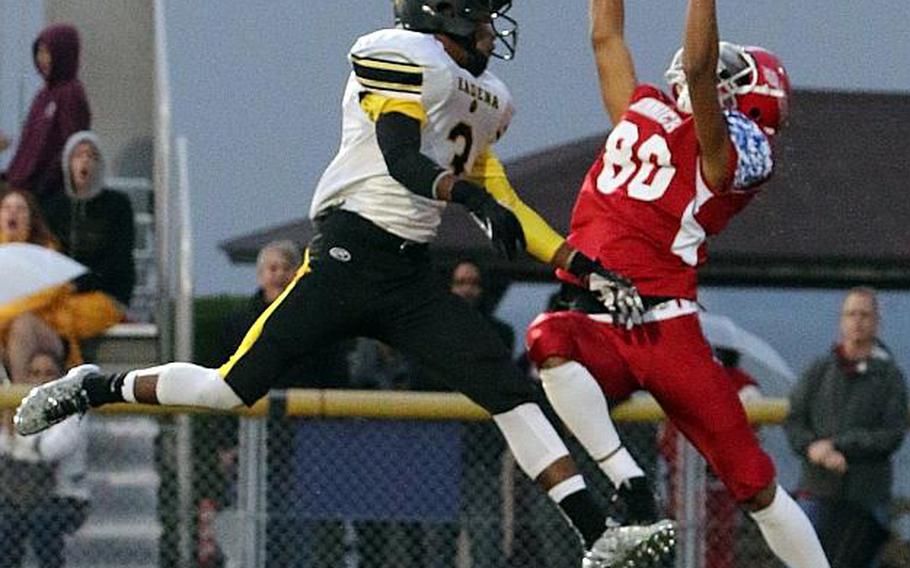 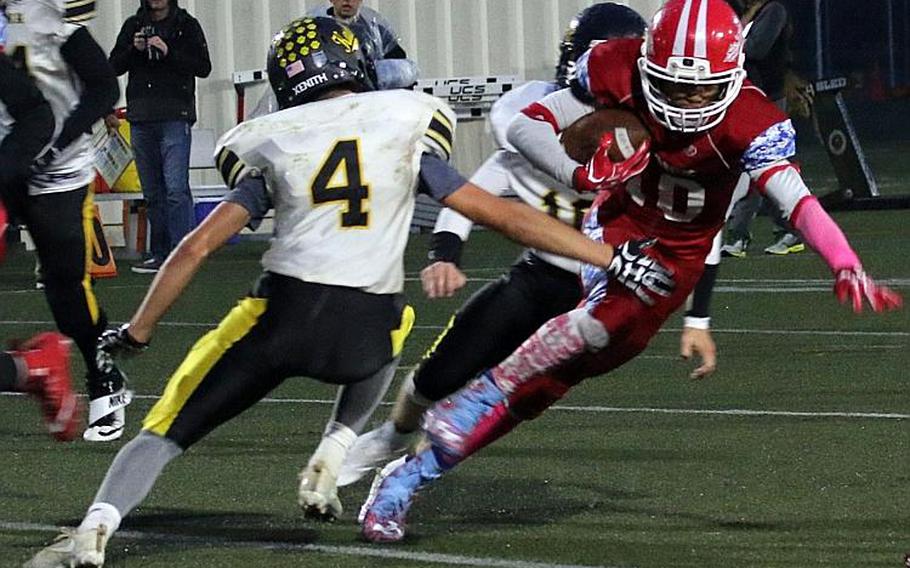 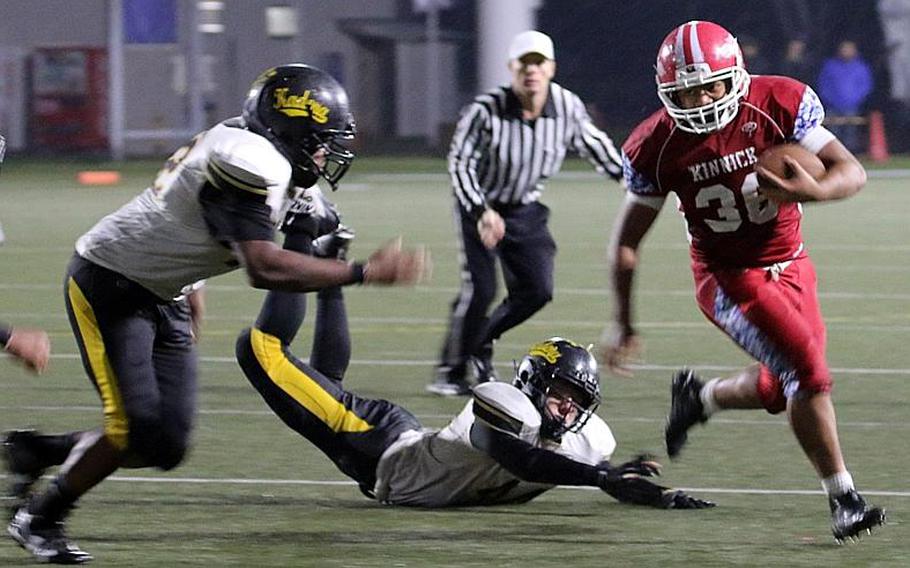 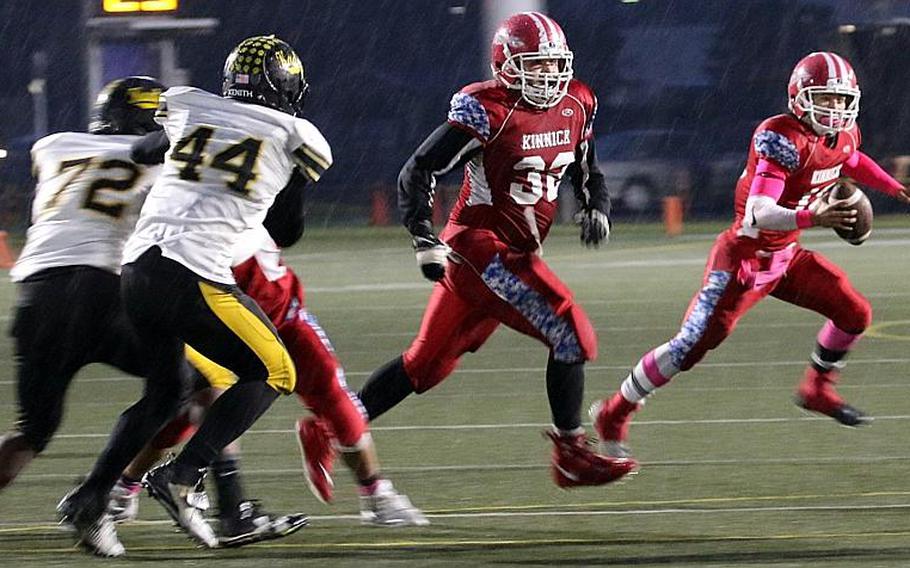 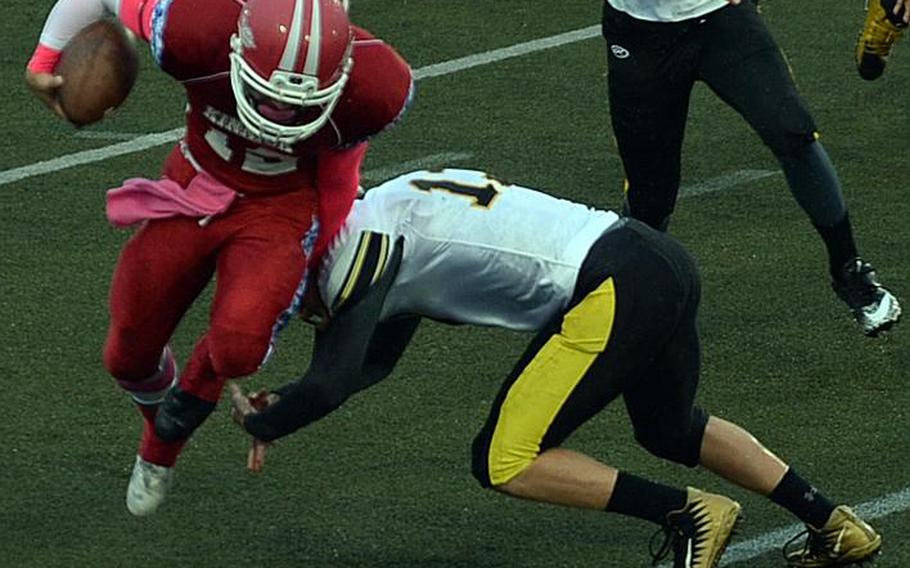 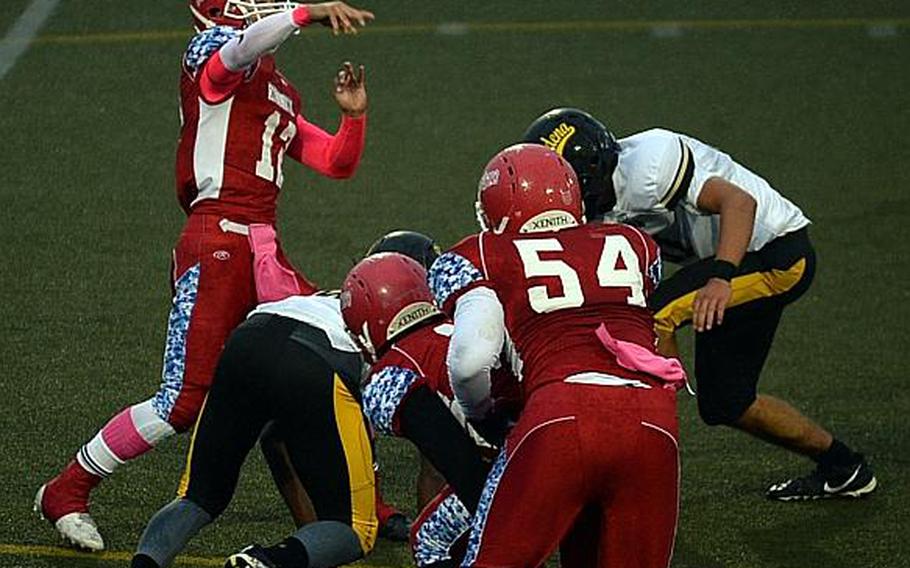 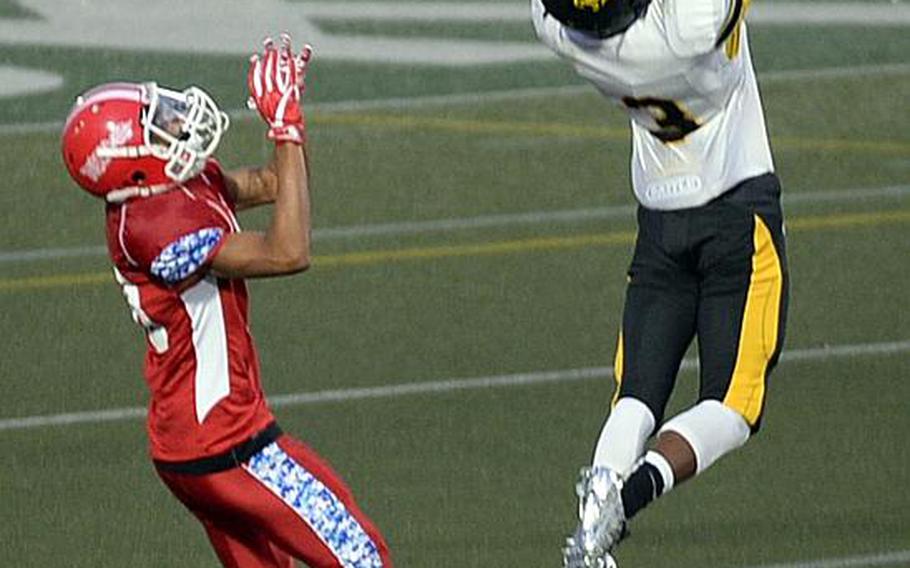 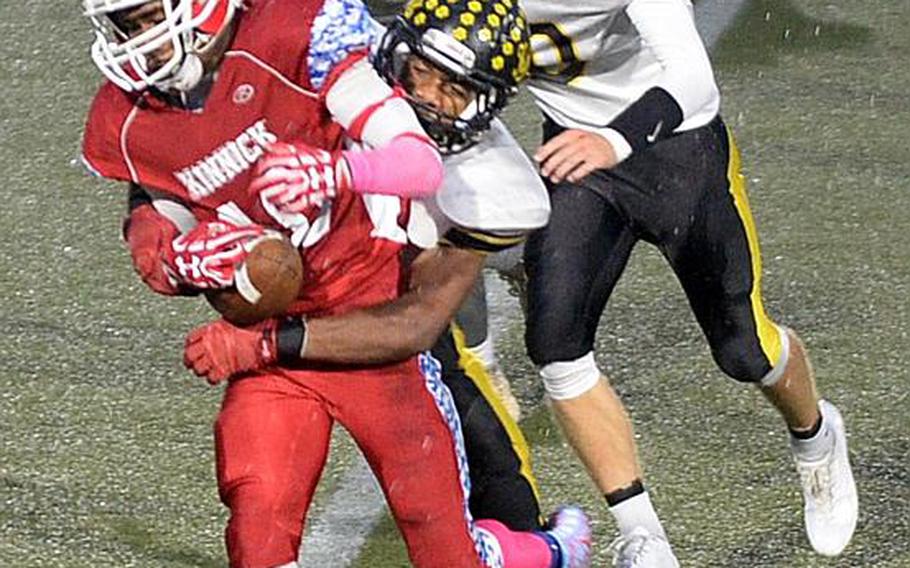 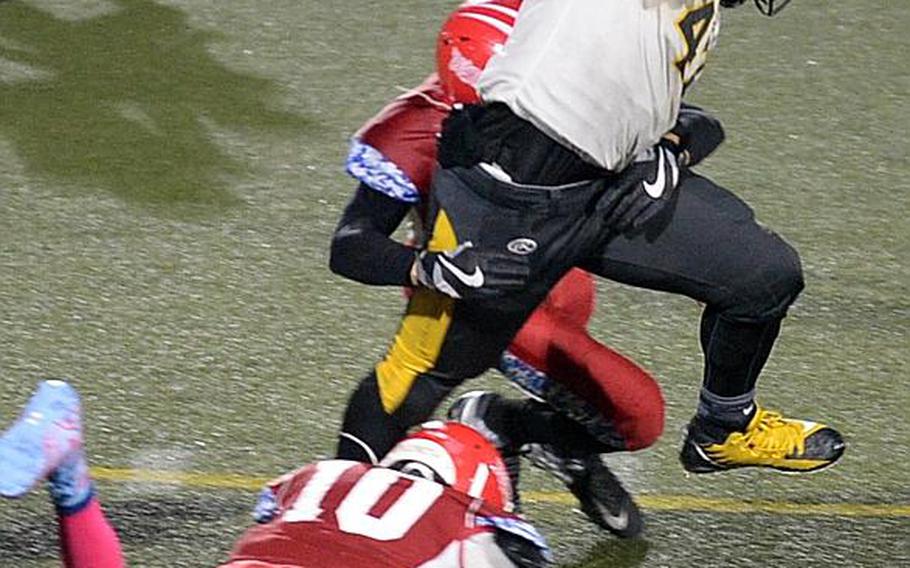 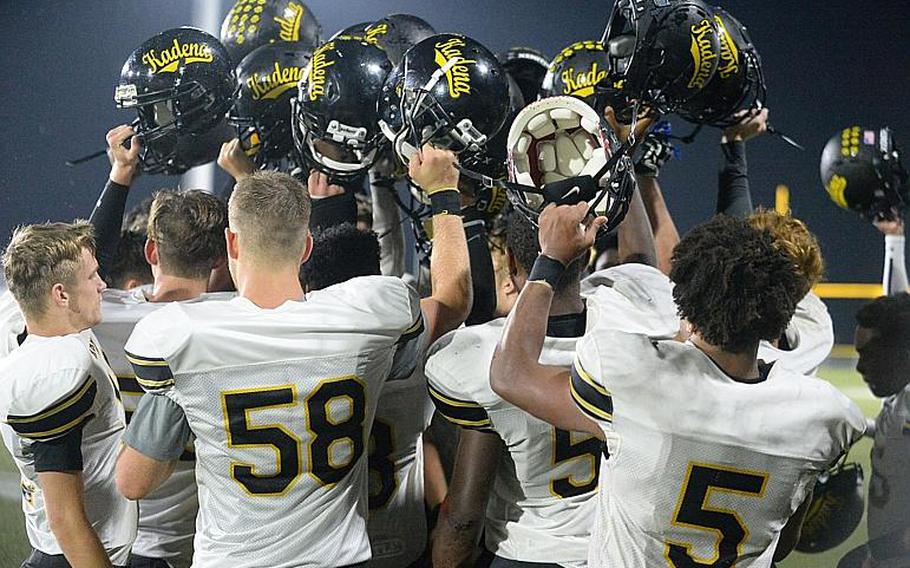 YOKOSUKA NAVAL BASE, Japan – Go for the corner of the end zone and find the championship.

That, coaches and players said, was Kadena’s philosophy going into the last play of the game and the ensuing two-point conversion, on which quarterback Cody Sego and running back Eric McCarter each ran left, toward open space in the corner.

Sego’s 9-yard touchdown run and McCarter’s conversion capped a 66-yard, 13-play drive covering the last 4 minutes, 44 seconds of the game and rallied the Panthers to a 23-22 win Saturday at Nile C. Kinnick for their Pacific-record sixth Far East Division I football title.

“The corner was open, so I just decided to take it, run to the corner and it worked out,” said Sego, who capped his career with his third title in four finals appearances.

“When I got the ball, (Sego) had a good read to pitch me the ball, I just saw open field and I knew I had to get in there for my team,” said McCarter, a first-year Panther who transferred from California.

“We were looking at their (Kinnick) defensive set-up,” Panthers coach Sergio Mendoza said. “For us, it was, ‘Let’s have courage, let’s have heart and let’s do our best.’”

And it capped an up-and-down season for Kadena. It began with three lopsided wins. Seven players were then suspended for a game due to an undisclosed code-of-conduct violation.

“We got off to a tumultuous beginning,” Mendoza said. “But the boys grew, they matured. I’m really proud of them. Kinnick has a fantastic team. They’re well coached. They’ve come a long way. Congratulations to them on a great season.”

It was a different game than the first time the teams met when the teams scored 13 touchdowns, gained 916 yards and swapped the lead five times in the final quarter. This time, the teams “only” gained 648 yards, though the lead did change on three of the last four possessions.

“It was a great football game; that’s championship football,” Kinnick coach Dan Joley said. “That one last drive, we needed a stop and we didn’t get it. I said it would come down to defense, and it did.”

Defense ruled early, holding the teams to a combined 22 points through the first 38:58, followed by three touchdowns over the last 9:02.

McCarter scored on a 41-yard run on the Panthers’ first play from scrimmage, then Kadena took an 8-0 lead on a safety late in the quarter.

Kinnick charged back to lead 14-8 on quarterback Kacey Walker’s 1-yard sneak 2:02 into the second quarter, then Walker found Aaron Peterson from 19 yards out to put the Red Devils up by six at half.

McCarter finished with 212 yards on 25 carries and Sego 36 yards on 14 attempts. Uriah Morris carried 18 times for 96 yards for Kadena.