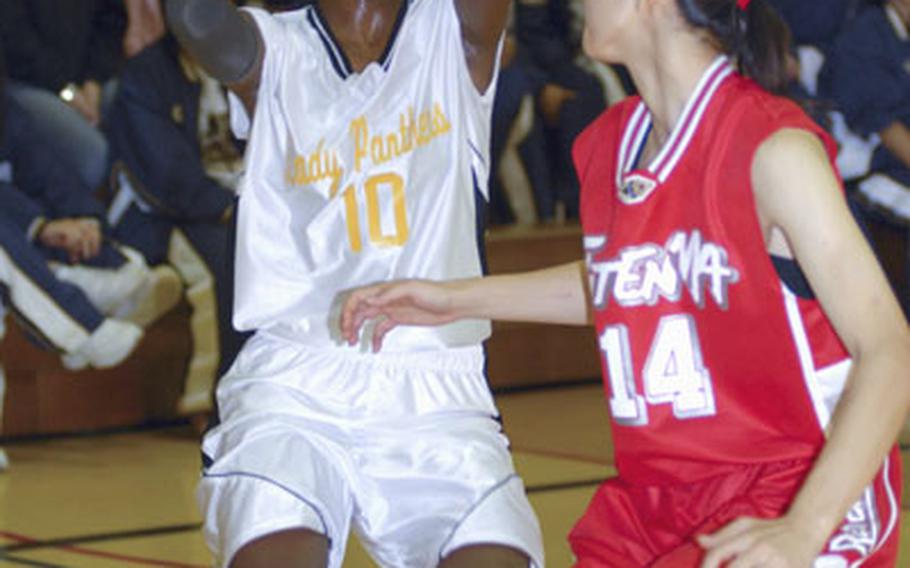 Before more than 1,000 cheering Japanese and U.S. fans, Department of Defense Dependent Schools-Okinawa&#8217;s Kubasaki Dragons were rallying from a 19-point deficit, eventually pulling out a 97-92 victory over Japanese team Konan.

It was the boys championship game of the Okinawa-American Shootout, a first-ever gathering of DODDS-Okinawa&#8217;s Kadena and Kubasaki High School boys and girls teams and clubs from nine Japanese schools on the island &#8212; a culmination of a months-long effort by the district office, sponsors and backers on and off base.

She was speaking of the Shootout and a Jan. 21 wrestling tournament at Kubasaki that drew five Japanese clubs and 40 wrestlers. Each was a result of a three-year effort that has more than doubled competitive opportunities for DODDS-Okinawa athletes.

It was far different from 2003, said Vaughn-Wiles and other district officials, when parents began K24EO, or Kadena and Kubasaki for Equal Opportunity.

Kadena and Kubasaki squads faced $10,000 per-team air fares to fly the 1,000 miles from Tokyo and 800 to Seoul. They were confined to playing each other and whatever Japanese teams would play them &#8212; which at the time weren&#8217;t many.

But there were hurdles: rules that DODDS-Okinawa students must not miss school for non-DODDS-sanctioned events and that no district money could fund such ventures.

The district began vaulting those hurdles in summer 2004, when it hired Misa Akeno to liaison with Japanese schools. She&#8217;s opened doors to outfits such as the Okinawa Basketball Association and took over game scheduling from schools and coaches.

Still, Meyer said, &#8220;The Japanese had no incentive. ... We had to make them need us. ... It should be educational and cultural as well as recreational. They want to learn English and experience Americana.&#8221;

Even the K24EO leader &#8212; Bechtel Elementary School teacher Lon LaGrave &#8212; says &#8220;there appear to be more competitive opportunities within Okinawa for athletes at the high schools.&#8221;

Meyer said that&#8217;s due in part to Akeno&#8217;s contacts; DODDS students winning six of the nine weight classes in the Jan. 21 wrestling tournament also didn&#8217;t hurt: He said the Japanese coaches told him they learned the U.S. athletes &#8220;are actually pretty good competition.&#8221;

The tourneys also got traction from two preceding initiatives.

&#8220;He saw a need and he addressed it,&#8221; Meyer said, noting that Burns and Kadena coach Sergio Mendoza also take teams to the Kanto Plain Association of Schools Invitational meet each May, raising their own funds and ensuring no school is missed.

But, Meyer said, &#8220;Sports such as football ... still suffer from a lack of local competition.