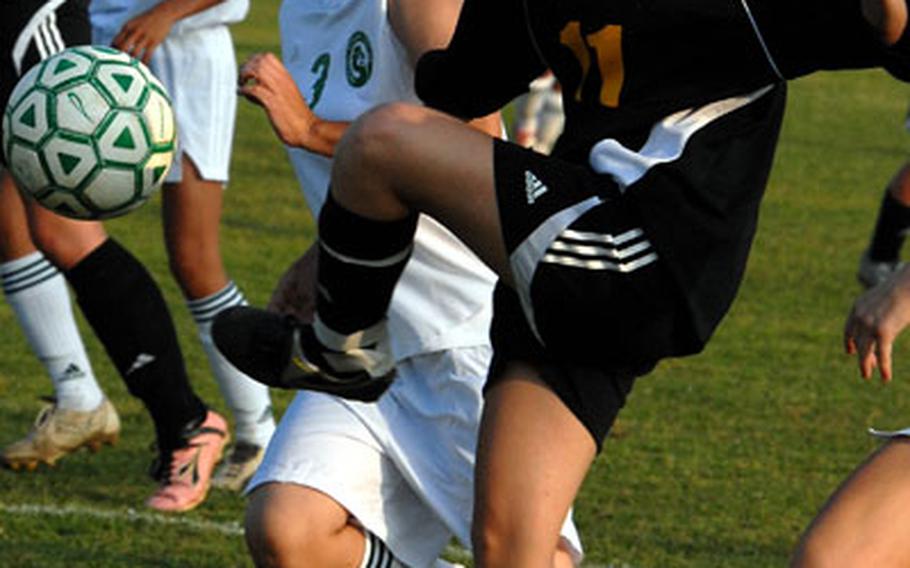 The ties gave Kadena&#8217;s teams the Okinawa Activities Council regular-season titles. The Panthers boys went 1-0-4, and the girls were 3-0-2.

It was an unusual season for the teams that regularly compete for Far East championships. Kadena has 10 titles and Kubasaki four.

Despite the dearth of goals, the two matches did yield one silver lining.

Kubasaki&#8217;s backfield of Diana White, Alexis Salmon and Sarah Rhodes &#8212; who celebrated her 18th birthday Wednesday &#8212; and goalkeeper Alix Mackey put the clamps on Jen Abel, who has a Pacific-leading 49 goals, and Kyla Feeney (13).

Feeney had the game&#8217;s best opportunity five minutes into the second half. She took an Abel corner kick and blasted it toward the net. Mackey was out of position, but White got a head on it, squelching the threat.

Kelly hoped that Martinez&#8217;s performance was &#8220;a sign of things to come&#8221; during the Class AA tournament May 21-25 at Kadena. Martinez gave up only four goals last season, three in losing the tournament final 3-0 to Kadena, but was left off the All-Tournament team.

YOKOTA AIR BASE, Japan &#8212; The longest unbeaten streak in Yokota girls soccer history ended Wednesday when American School In Japan edged the Panthers 2-1 on a penalty kick by Appan Lok with 15 minutes left.

Yokota fell to 11-1-2 overall and 6-1-2 in the Kanto Plain Association of Secondary Schools. The Mustangs improved to 6-1 and can win the league title Thursday against Zama or Monday against Kinnick, both at home.

The contentious match featured two missed penalty-kick opportunities by Yokota&#8217;s Daniya Nixon. After a foul in the area, Nixon hit the post on the first try, but ASIJ goalkeeper Carly Vaire was whistled for leaving the goalline too soon. Nixon tried again and Vaire stopped it.

The foul call so infuriated ASIJ coach Carlos Aranda that he came onto the field to argue with the referees, and was still on the field during Nixon&#8217;s second penalty kick.

Laura Inglesrud of ASIJ scored the match&#8217;s first goal in the 30th minute off a corner kick.