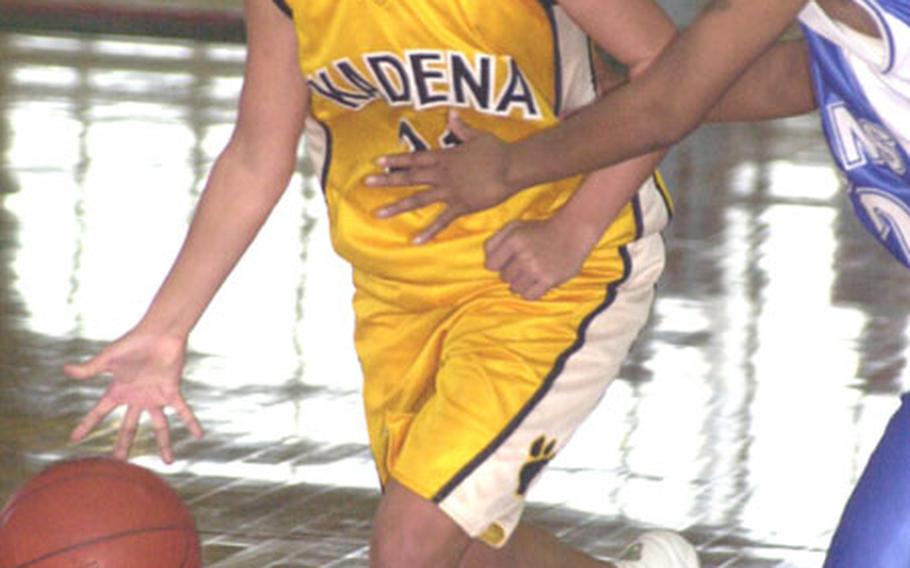 But Kadena and Kubasaki High School&#8217;s girls basketball teams moved up that timetable by four weeks and made a bit of history Sunday in the Martin Luther King Pacificwide Open Basketball Tournament.

By winning their first-round loser&#8217;s bracket games in the double-elimination playoffs, both the Panthers and Dragons guaranteed themselves berths in the semifinals &#8212; the first time high school teams have placed in the 13-year history of the tournament.

No matter where they finished, players and coaches from both teams said the days when the MLK&#8217;s predominantly interservice- and open-team field could count on a high school team as an automatic &#8220;W&#8221; are history.

&#8220;The time of putting us in into the tournament as filler teams is over,&#8221; said coach Ken Hudson, whose Panthers will defend their Far East high school Class AA Tournament championship next month on the very same Foster Field House courts.

The Panthers and Dragons have a long and storied history in Far East tournament play. Kubasaki holds the all-time record with seven Class AA titles, while Kadena has won four.

Past MLK tournaments have served as a platform for experience and growth, not necessarily for Kadena or Kubasaki to excel. They routinely went winless in round-robin play and exited on Saturday night.

&#8226; Only once since high school teams were given entry to the MLK starting in 1997 had one won even a single playoff game (Kubasaki girls in 2002).

&#8226; For the first time, the Dragons and Panthers each earned their way into the playoffs; twice before, all women&#8217;s teams were granted playoff berths in abbreviated fields.

&#8226; Kubasaki and Kadena each beat Guam&#8217;s Andersen Bombers, who became the first interservice team to lose to both high school teams in one MLK.

Playing up meant contending with a much more physical style of ball than they&#8217;re used to, but they&#8217;ve acquitted themselves well, Kubasaki coach Bob Driggs said.

Such improvement bodes well for the Panthers&#8217; and Dragons&#8217; chances at Far East, Hudson said.

Driggs boldly predicted that third and fourth place might only be a rest stop for the Panthers and Dragons.