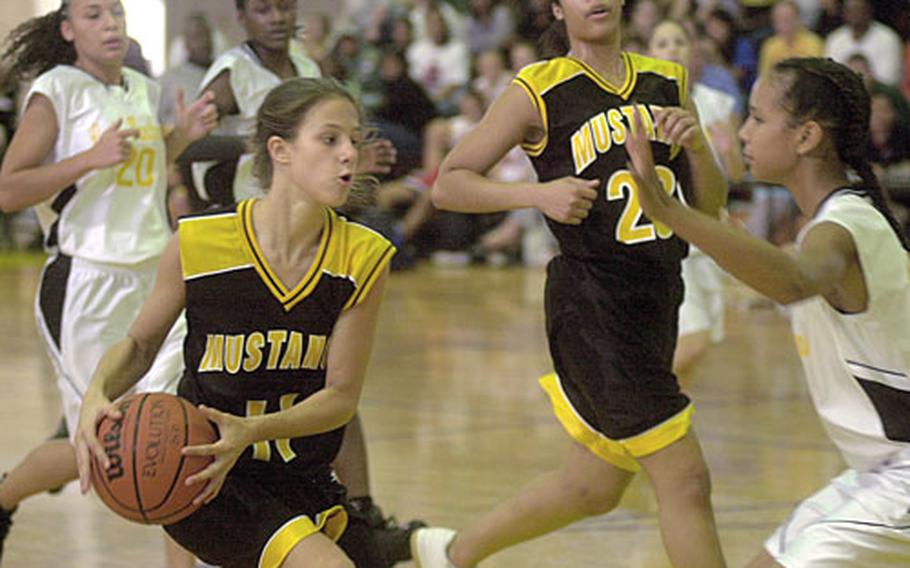 Hudson, a sophomore guard, came off the bench to lead a Panthers barrage of three-point goals. She hit four of her five and Kadena sank seven of its 12 during the first quarter as the Panthers routed American School In Japan 85-32 in Saturday&#8217;s tournament championship game.

Hudson&#8217;s father, Kadena coach Ken Hudson, said the Panthers&#8217; outside attack was chosen to counter the Mustangs&#8217; clogging the middle with their 1-3-1 zone defense.

Brooke Hudson entered the contest with about four minutes left in the first quarter. She went to work immediately, triggering a slew of perimeter shots that put Kadena ahead 27-9 after one quarter and 31-11 three minutes into the second.

The Panthers concentrated their defensive efforts on preventing ASIJ point guard Kana Maeji from getting her hands on the ball.

Kadena was able to contain all of the Mustangs, save for senior center Catherine Thornton, who paced ASIJ with 21 points.

The lead continued to grow as the minutes ticked down on one of the most one-sided Class AA title games in memory.

The Panthers were the 16th host team to book a ticket to the final since 1986; 11 have won, including the last six.