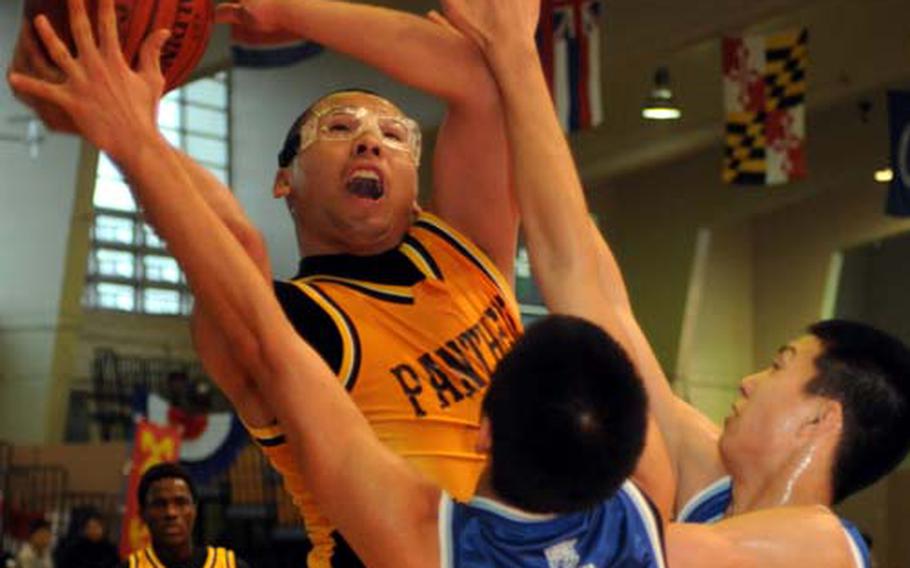 Kadena ended the 4th Okinawa-American Basketball Shootout the way the Panthers began it, falling to the top-ranked Japanese team on the island in the tournament championship.

But even after his team lost a heartbreaker to Konan 60-57 Sunday, Kadena&#8217;s coach said the tournament was a valuable building block for the team&#8217;s chances in next month&#8217;s Far East Class AA Tournament at Yokota.

"Any time you get a chance to play quality teams, it&#8217;s great preparation," Robert Bliss said after the finals defeat. "Great tournament. Great competition with the top Okinawa teams."

Over the next eight minutes, Konan outscored Kadena 23-6, taking the lead for good 34-32 on Kotaro Mitsushima&#8217;s rebound layup with 6:20 left in the third quarter.

"Konan&#8217;s a great team. They made a lot of long-range jumpers when they needed to. They got a couple more good looks and made more shots than we did," Bliss said of Konan&#8217;s second-half uprising.

Konan took its biggest lead at 54-42 early in the fourth quarter before Kadena made one last charge.

Taiyo Robertson cut it to 58-57 with 50 seconds left, Konan hit two foul shots, then the Panthers seized one last chance to tie it when Kevin Paranal stole the ball with 3.4 seconds left. Robertson&#8217;s game-tying three-point attempt bounced off the iron at the buzzer.

Paranal paced the Panthers with 20 points, Hubbard added 14 and Robertson 10.