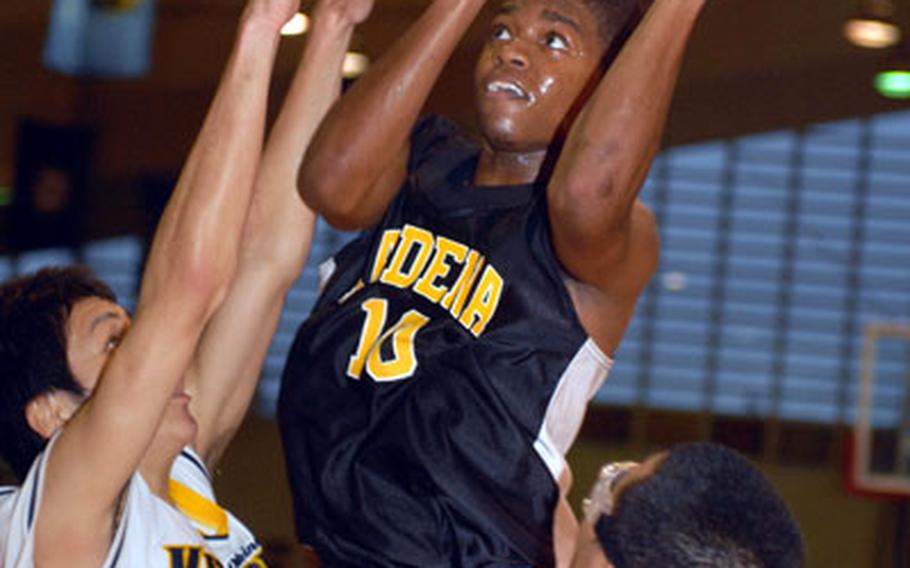 CAMP FOSTER, Okinawa &#8212; Lying on his back on the court, Josh Greggs shut his eyes, pulled his jersey up over his chest and breathed deeply.

The game featured seven early lead changes and five ties before the Panthers surged to a 15-point third-quarter lead, 48-33, on Kevin Paranal&#8217;s rebound bucket with 4:10 left in the period.

But the Fighting Lions, who edged the Panthers 124-123 in overtime in a December game at Kadena, kept fighting back behind hot-shooting Ryuichi Kishimoto. The two-time All-Tournament guard scored 33 points, including nine three-point goals, the last coming at the buzzer.

Kadena&#8217;s goal, Bliss said, was to handle Kitanaka&#8217;s speed and defensive pressure while keeping Kishimoto as far from the basket as possible.

Thanks to the play of Paranal (12 points) and junior Jamil Barney (24), the Panthers remained just enough ahead. Barney&#8217;s performance came on the heels of his winning MVP honors in last week&#8217;s Martin Luther King Invitational Tournament for military teams.

&#8220;We&#8217;re starting to figure out how to slow it down and use our height,&#8221; Kubasaki girls coach Bob Driggs said after the Dragons outlasted Urasoe 58-56 in overtime of the fourth-place game. Kubasaki won four games over the weekend after having won just two the rest of the season.