Kadena and Kubasaki still too close to call 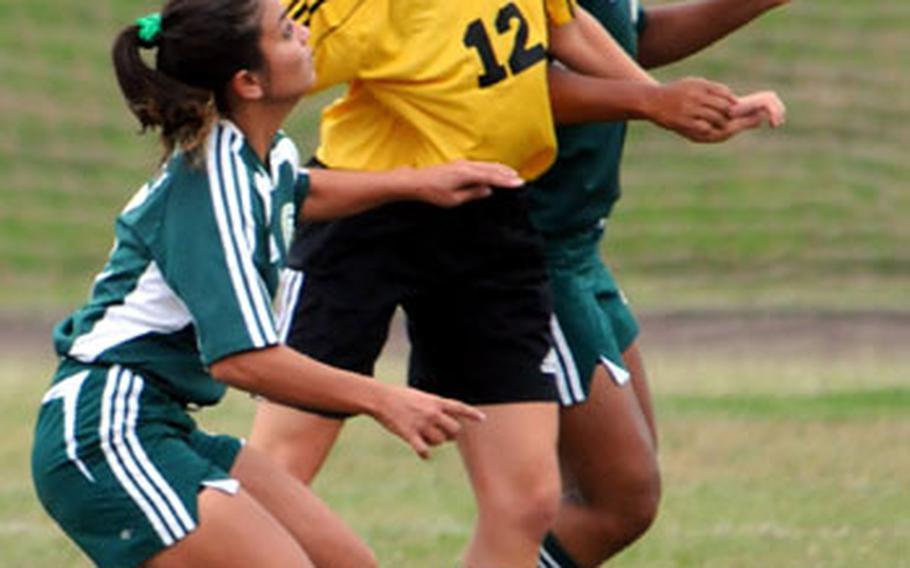 Ashley Zapp, left, of Kadena and Ku’leialoha Ampong of Kubasaki go head to head for the ball during Thursday’s girls soccer match at Kadena. Kubasaki won 2-1. (Dave Ornauer/Stars and Stripes)

KADENA AIR BASE, Okinawa &#8212; The boys and girls soccer teams from Kadena and Kubasaki have played played four matches between them this season. All four matches resulted in one-goal victories. One match was decided by penalty kicks.

"Typical Kubasaki-Kadena, which is good," Kubasaki boys coach Chris Kelly said after his Dragons fell Thursday 4-3 to the Panthers.

The verdict evened the Okinawa Activities Council season series at one match apiece, with the rubber match May 1 at Kubasaki. The Dragons won the season opener 2-1 on penalty kicks on March 17, also at Kubasaki.

On the girls&#8217; side, the Dragons won their second straight OAC season series, edging the Panthers 2-1.

One team or another might win the season series, but "neither of us can get the advantage over the other," Kadena boys coach Tom McKinney said.

Which, he said, is an advantage over other teams in the Far East Class AA Tournament.

"You have to play to win and not play to not lose," she said.

Stanley Schrock scored three goals and assisted on the goal by Justin Fernandez that gave Kadena the lead for good at 3-2 just before halftime.

Kristie Karibian put Kadena&#8217;s girls ahead in the third minute, but Maya Lowe answered with a goal from 40 yards out and Elizabeth Fabila added a second-half penalty kick. Kubasaki&#8217;s defense took it from there.

"They deserve it," Kadena coach Hoa Nguyen said. "They&#8217;re a much better, stronger team than us right now."

Elsewhere in the Pacific, Aubrey Ashliman scored five goals on Wednesday, giving her a region-high 31 this season, and Zama American&#8217;s girls (13-2-2) snapped a two-match skid 8-1 over Christian Academy In Japan.

Daegu American&#8217;s girls returned from the spring break in style, scoring three goals in the second half of a 3-0 victory over Seoul International. But the Warriors (4-5-3) could have had more, coach Ed Thompson said.

"Frustrating. We had so many shots on goal. I was worried if we would ever score," he said.

"We can&#8217;t seem to get rid of that goose egg," Warriors coach Larry Knierim said.