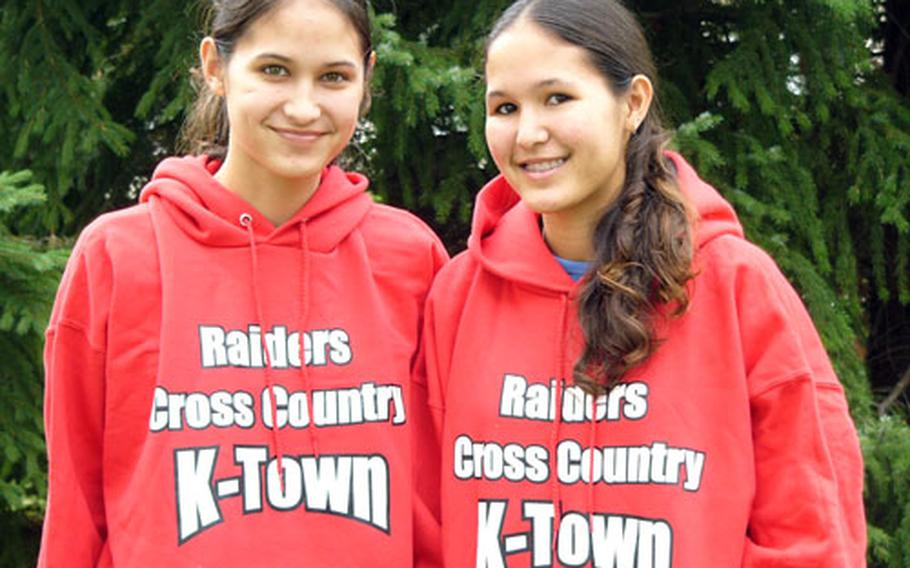 Kaiserslautern’s Joy, left, and Anna Hrushka, who have broken three course records in consecutive weeks this season, will next take their exploits to the European championships on Saturday. (Rusty Bryan / S&S)

KAISERSLAUTERN, Germany &#8212; Last Saturday, just like the two before it, the girls cross country season sounded like a broken record &#8212; another hit by sisters Joy and Anna Hrushka, Kaiserslautern&#8217;s record producers.

The performance marked the third straight week a Hrushka had shattered a course record. Anna, 17, had accomplished the feat Oct. 7 at Ramstein, beating the 21:29 run there in 2004 by defending European champion Ashleigh Spencer of Wiesbaden by 11 seconds, and again at home Oct. 14, running a 20:18 to best her sister&#8217;s mark of 21:08 set earlier this season.

Last Saturday, Joy got the record, but Anna and the Hrushkas&#8217; teammate, Colleen Smith, all finished faster than the previous record. Smith placed second in 19:36; Anna took third in 19:43, and the family record collection continued to grow.

The Hrushkas, home-schooled students who said their future plans are undecided, have only been running for five years, ever since their father, Guy, a graphic arts teacher, entered his soccer-playing daughters into fun runs while the family was living on Guam.

Despite familial loyalty and success in cross country, the Hrushkas aren&#8217;t fully committed to running. They still play soccer in the spring, much to the chagrin of Kaiserslautern coach Marty Kollar, who also runs the Red Raiders&#8217; track program.

Dust is what most of the runners who&#8217;ve challenged the sisters this season have been eating. In fact, the only runners to finish ahead of a Hrushka this season are Smith, who won Sept. 24 at Patch, and Patch&#8217;s Maggie Redmond, who finished second to Smith in that race, just ahead of the Hrushkas.

&#8220;We usually follow each other when we run,&#8221; Joy said, but Anna added that race decisions are completely spontaneous.

Until the finish line looms.

Competition will be the primary order of business this Saturday, when the Hrushkas line up for this year&#8217;s European championships at 1:30 p.m. at Tompkins Barracks in Schwetzingen, just outside of Heidelberg.