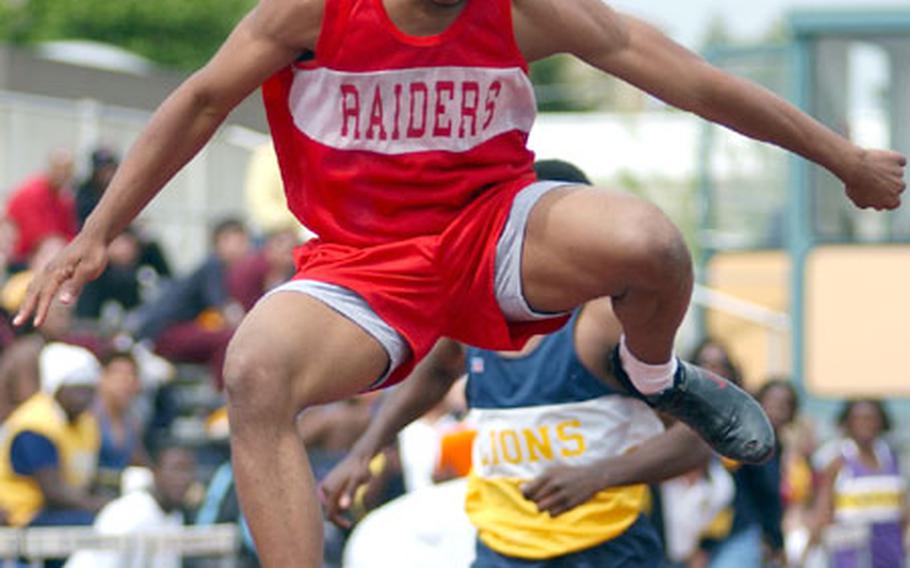 Kaiserslautern’s Gregory Thompson won the long jump, the triple jump and the 300-meter hurdles in the Division I track and field championships Saturday in Würzburg, Germany. (Raymond T. Conway / S&S)

The Kaiserslautern junior says he didn&#8217;t get serious about track and field until the middle of last season.

Now, one the eve of the Department of Defense Dependent Schools European track championship, Thompson is favored to win three gold medals, and is in contention for a fourth.

Not bad for someone who just began jumping this season.

In addition to his jumps, Thompson also lowered his DODDS-best time in the 300 hurdles to 40.99 seconds, becoming a three-event Division I champion in the process.

Even the opposing coaches have noticed.

One of those seven events Johnson mentioned would seem to be the 110-meter high hurdles, but the 5-foot-9 Thompson, who floats over the intermediates, is wary of the verticality and technicality of the highs.

Thompson, who&#8217;s lived in Germany all his life, said he&#8217;s planning to visit George Mason University in Virginia and the University of North Carolina this summer to lay some groundwork for his track future.

But for now, he said he focused on his track present.