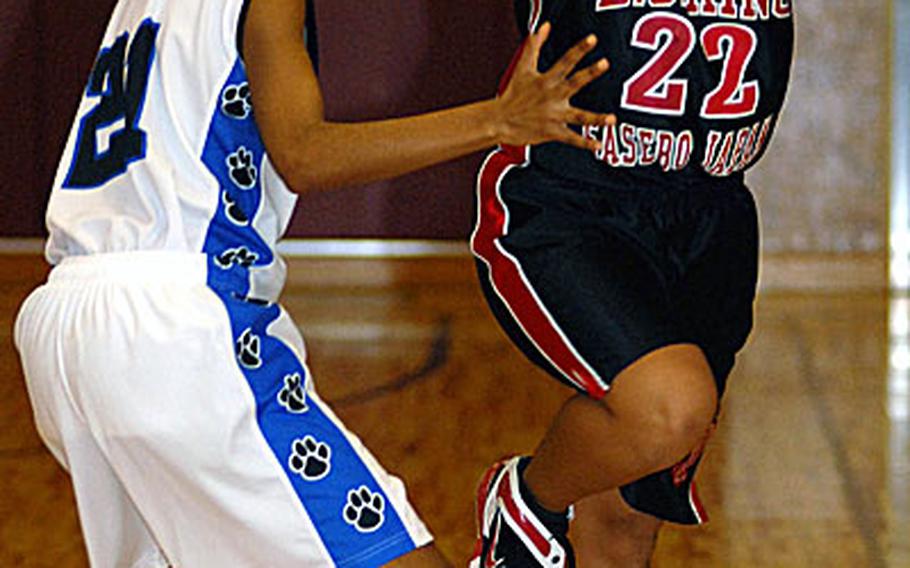 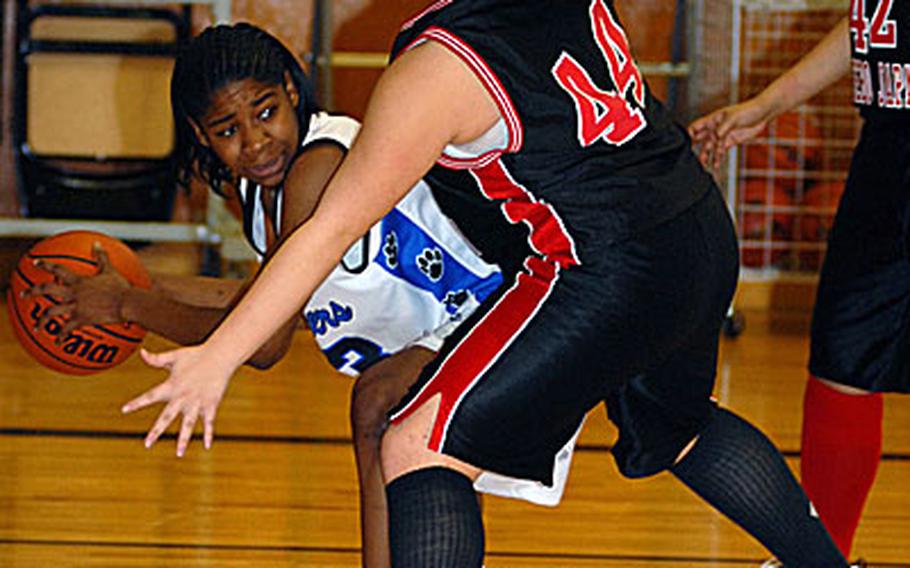 IWAKUNI MARINE CORPS AIR STATION, Japan &#8212; Just when it appeared that the chances of winning a DODDS-Japan Basketball League title were slipping away from the E.J. King girls, Yudia Johnson came to the Cobras&#8217; rescue.

The senior forward hit two clutch baseline jump shots, the first coming with 1:38 left, and gave the Cobras the lead for good as they survived a seesaw battle with Yokota 48-43 on Saturday with the league lead at stake.

Johnson scored six of her 15 points in the final quarter of a game in which the lead changed 10 times. She might have done more, but missed part of the second half because of foul trouble.

The Panthers used a 2-2-1 zone press and a box-and-one defense in an effort to trap and slow Cobras junior guard Kristia Suriben, who nonetheless broke the pressure again and again.

Cabral said that playing too conservatively in the closing minutes, instead of remaining aggressive, helped keep the Cobras close enough to snatch the victory.

To match the Cobras for the league&#8217;s best record, Yokota needs to win its last two JBL games, at home against Zama American on Feb. 13 and at Nile C. Kinnick on the 15th, and hope that E.J. King falters in at least one game in its last remaining JBL weekend series at Matthew C. Perry.

But coach Charlotte Hicks worries that her charges aren&#8217;t fully prepared to defend their Class AA titles in this year&#8217;s tournament, which begins Feb. 19 at Kadena Air Base, Okinawa.

Her main concerns, she said: Injuries, illness and emergency leaves that have prevented Hicks from cementing a player rotation. And having not played in a post-level Christmas tournament this season, Hicks fears her players may read too much into their unbeaten record.

Eagles girls on a roll ... just in time for layoffThe timing of a two-week layoff before the Far East Class AA tournament on Okinawa could not have been worse for coach Sarah Richardson and the Robert D. Edgren girls basketball squad at Misaawa Air Base, Japan.

But the JBL schedule shows the Eagles idle for the next two weekends before they travel to Okinawa &#8212; which Richardson said concerns her.