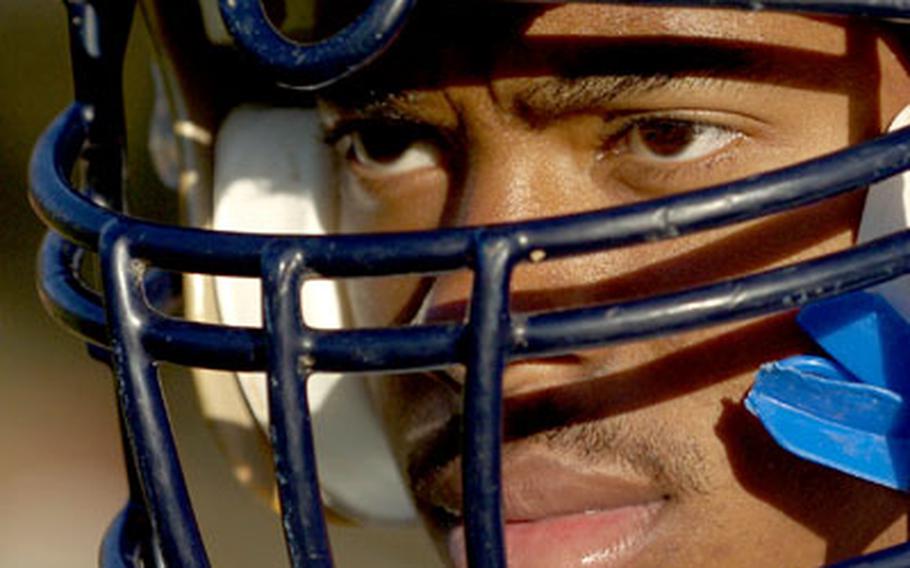 Wiesbaden running back Shannon McCray returned to Germany during the season after trying his hand in Texas for two games. (Raymond T. Conway / S&S)

WIESBADEN, Germany &#8212; As far as Wiesbaden football coach Steve Jewell is concerned, drop-ins like the one he found sitting in his classroom the first week of the season are more than welcome.

Unexpected and welcome, as only 4.4 speed for 40 yards can be.

When McCray, 17, showed up in time to play in Wiesbaden&#8217;s second game of the season, it was the second time in four months he stepped off an airplane and into pads.

&#8220;In Fort Worth, I went straight to summer drills,&#8221; said McCray, who had planned to play his senior year in Texas, staying with relatives, to improve his college recruitment chances. &#8220;We were doing two-a-days the day after I got off the plane.&#8221;

Anyone who has ever tried two-a-days during a Texas summer might be surprised to hear McCray&#8217;s view of the experience.

McCray opened the season in Texas, playing two games there before the lure of home pulled him back to Wiesbaden.

To the tune of nine carries for 139 yards and two touchdowns in the Warriors&#8217; conference opener, a 51-28 victory over Kaiserslautern. Clearly, he found it good to be home again.

Although McCray&#8217;s speed and quickness allow him to be elusive at will, Jewell said McCray&#8217;s more than willing to stick his nose into the pile.

For now, McCray&#8217;s focus is on helping his Warriors repeat as European Division I champs. Then there&#8217;s the matter of college ball.

Will his return to Europe hurt his chances?