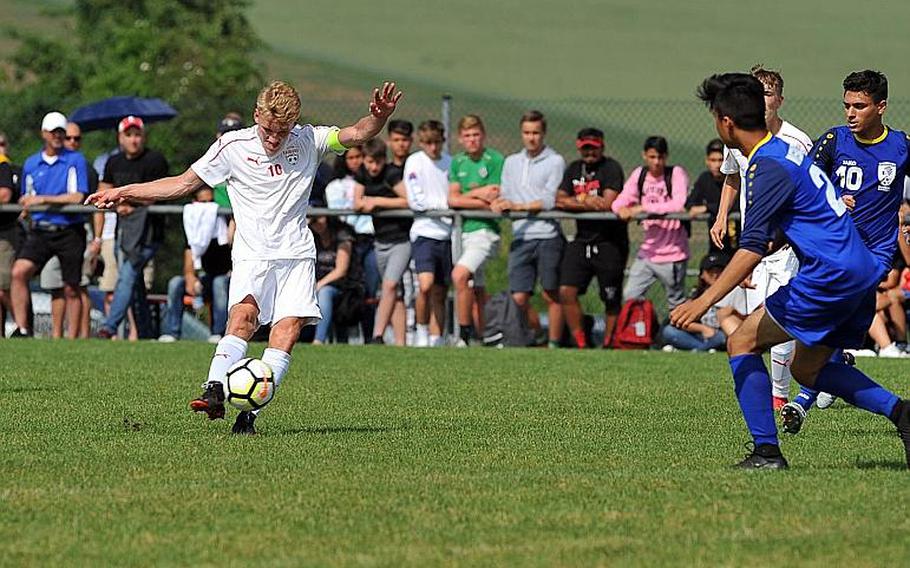 Kaiserslautern's Tyler Jankowski scores from outside the box in a Division I semifinal at the DODEA-Europe soccer finals in Reichenbach, Germany, Wednesday, May 23, 2018. (MICHAEL ABRAMS/STARS AND STRIPES)

Rising phenoms on the soccer pitch must fulfill a variety of roles to reach true stardom.

They must be a consistently positive presence for their team, with reliable outputs of effort and production.

That steady performance must create a few game-changing, or even season-defining, moments for their team.

And they must possess the confidence to make all that happen, even in a sport where the vast majority of opportunities are denied.

Kaiserslautern senior Tyler Jankowski came to embody all three of those roles as well as anyone in DODEA-Europe. As a result, he is the 2018 Stars and Stripes boys soccer Athlete of the Year.

Jankowski’s consistency was on display as he made the transition between 2017 and 2018 Raider rosters. The 2017 squad was historically dominant, securing its spot in DODEA-Europe lore with a 3-1 defeat of archrival Ramstein for the Division I European title.

The 2018 team lost many of the key players that produced that title, leaving Jankowski and fellow senior co-captain Pablo Zorrilla to bridge the gap. Jankowski’s reliable playmaking and scoring served as a touchstone as the revamped Raiders found their way, even as he labored under the heightened expectations of a defending champion.

“It was a lot more pressure,” Jankowski said.

That didn’t stop Jankowski from delivering. Key Raider wins over the program’s last two title runs all bear his signature. He scored an early goal in the 2017 title-game win over Ramstein. He set up the first goal of the Raiders’ 4-1 semifinal defeat of Wiesbaden with a beautiful arcing ball deep into enemy territory and tacked on two goals to extend the lead. His laser-focused free kick against Stuttgart in the 2018 final was the first goal of a 2-1 Kaiserslautern victory.

Each successive highlight was evidence of Jankowski’s unflappable confidence, both in his team and his own abilities.

“We knew we had it,” Jankowski said after the 2017 championship.

“From the start we knew it was ours,” he said after eliminating rival Wiesbaden.

“We wanted it more,” he said in the midst of the 2018 title celebration.

As those comments prove once again, nobody blends consistency and confidence quite like Jankowski.