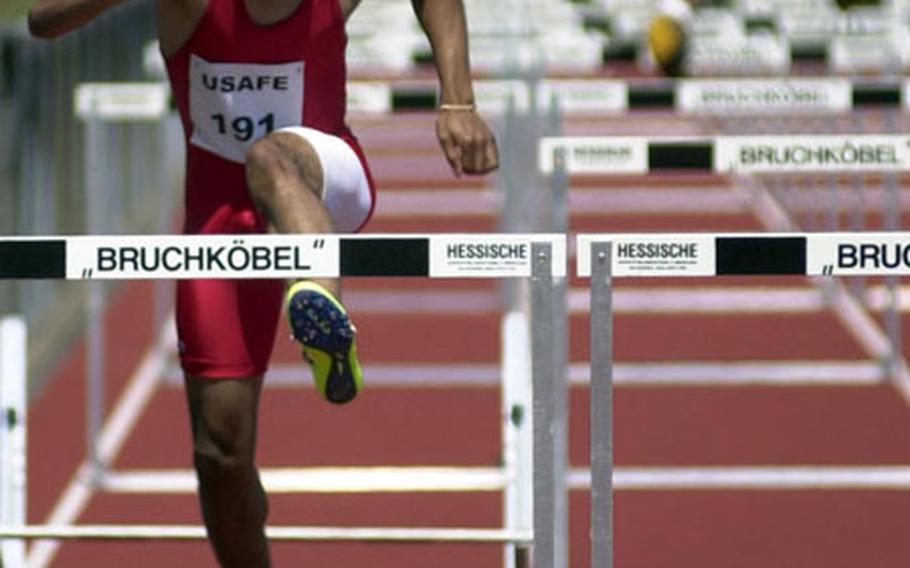 Kaiserslautern&#39;s Oscar Gramling has an eye on the clock as he approaches the final hurdle of the men&#39;s 110-meter hurdles at the U.S. Forces Europe Track and Field Championships in Bruchkoebel, Germany, on Saturday. Gramling was disappointed with his time of 15.52 seconds, even though he was far and away the winner of the event. (Raymond T. Conway / S&S)

BRUCHK&#214;BEL, Germany &#8212; Led by versatile Jennifer Jacobs and a five-medal performance in the weight events by the husband-and-wife duo of Christopher and Jennifer Diedrich, the Grafenw&#246;hr-Vilseck squad ran off with the team title Saturday in the 2003 U.S. Forces-Europe track and field championships.

Fresh from the Ironman Switzerland triathlon July 31 in Zurich, Jacobs, the USAREUR 10-Miler champion, tried her hand at the 400-meter hurdles to open her four-medal day with a silver. She then moved to her regular events and struck gold by impressive margins in the 800 and 1,500, and anchored Graf-Vilseck to a victory in the 4x400-meter relay in the final women&#8217;s event of the day.

The strategy worked. She ran second to teammate Virginia Arias for a Graf-Vilseck sweep. Arias took the gold in 1:12.81, and Jacobs followed in 1:14.29 to get the team started on its 359-point effort, far ahead of runner-up Spangdahlem&#8217;s 277.

Swords lapped the field twice in the 10,000 and won by 2:04 over runner-up Robin Zuch of Heidelberg, even though he let Zuch run shoulder-to-shoulder with him, one lap back, for five laps. Swords, who was offering advice and helping Zuch establish a pace, began pulling away with three laps to go and won by nearly two laps.

Two hours later, Swords changed clothes and took the 1,500 wire-to-wire by more than nine seconds over late-closing Phillip Livingood of Baumholder. A third uniform produced a third victory in the 5,000 as Swords beat Ryan Hort of W&#252;rzburg by more than 1:07.

Even with the remarkable performance by Swords, however, K-town finished third in the team standings with 152 points.

Jennifer Diedrich of Graf- Vilseck matched Jacobs in individual medals. She won gold in shot put and discus and silver in javelin, a discipline she is less familiar with.

Husband Christopher, recently back from a nine-month deployment, chipped in with shot put silver and discus gold, alternating those medals with Byron Grays of Spangdahlem. Grays took the shot by 11 centimeters; Diedrich was nearly eight meters farther than Grays in the discus.