It'll take miles and miles for champs to be crowned 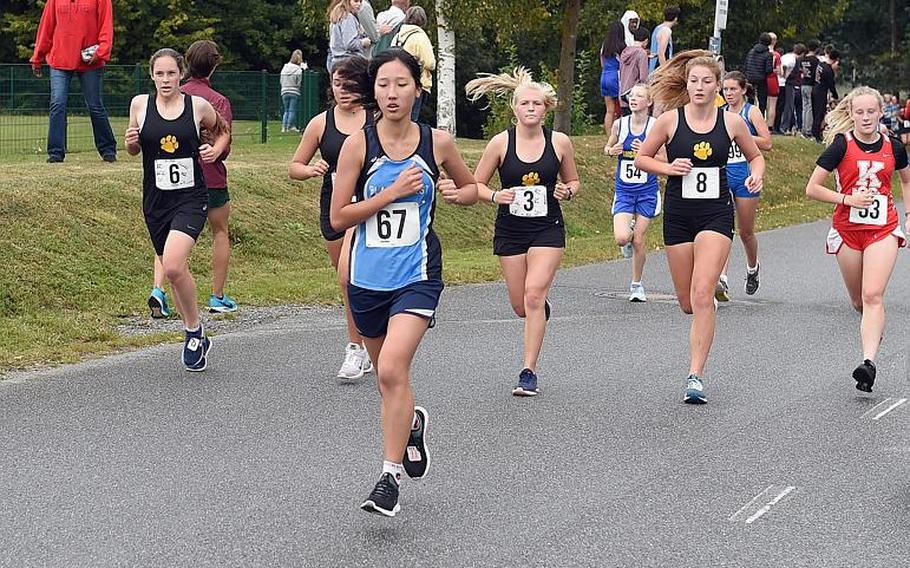 The race is underway for the 2019 DODEA-Europe cross country championships.

The first of six Saturdays of 5-kilometer competition was completed Sept. 7 with opening meets at Ramstein, Vilseck and Vicenza. Runners will work over the course of the fall to qualify for the European championship meet, set for Oct. 19 at Baumholder, Germany.

Girls St. John’s junior Abigail Michalec is the would-be favorite to defend her title and extend the Belgian school’s run of dominance over the girls’ side of the DODEA-Europe sport. Michalec cruised to a 21-second victory in last year’s title race to claim the torch left by former classmate Kayla Smith, the graduated multiple-time champion.

The St. John’s situation is a bit more complicated than in years past, however. The school is not a regular participant in any other DODEA-Europe sport, and it’s not yet clear to what extent the school will participate in cross country this fall due to what St. John’s athletic director Anthony Hennelly called “calendar clashes.”

While Michalec’s title defense is in limbo, the DODEA-Europe field is full of hopeful runners looking to make the point moot.

Stuttgart’s McKinley Fielding, last year’s third-place European finisher, made a memorable opening statement Saturday, crossing the finish line in 18 minutes, 58 seconds and claiming first place by a stunning margin of over two and a half minutes over Kaiserslautern runner-up Kayla Ballard.

Boys The graduation of 2018 champion Dashiell Rogers of Ramstein left a vacancy at the top of the boys standings that a fellow Royal is hoping to step into.

Long a reliable presence in the top 10, Ramstein senior Connor Mackie is looking for a championship breakthrough this fall. He started that effort strong on Saturday with a first-place finish in the six-team meet at Ramstein.

He’ll be significantly challenged by crosstown rival Griffen Parsells of Kaiserslautern, who claimed a convincing win of his own in Saturday’s meet at Vilseck.

The Stuttgart Panthers plan a full-on assault on the Division I team championship this fall after finishing behind champion Ramstein and runner-up Kaiserslautern a year ago. Landon McMinimmy, last year’s third-place individual finisher at the European finals, and senior Tyler Wilson headline a fleet of Panther runners who claimed the remainder of the top 10 spots behind Parsells in Saturday’s opener at Vilseck.

SHAPE’s Sam Dowdell, Lakenheath’s Aiden Stamp and Matthew Cavanaugh and Black Forest Academy’s Ethan Zerbe are among those looking to make a run at the open championship.