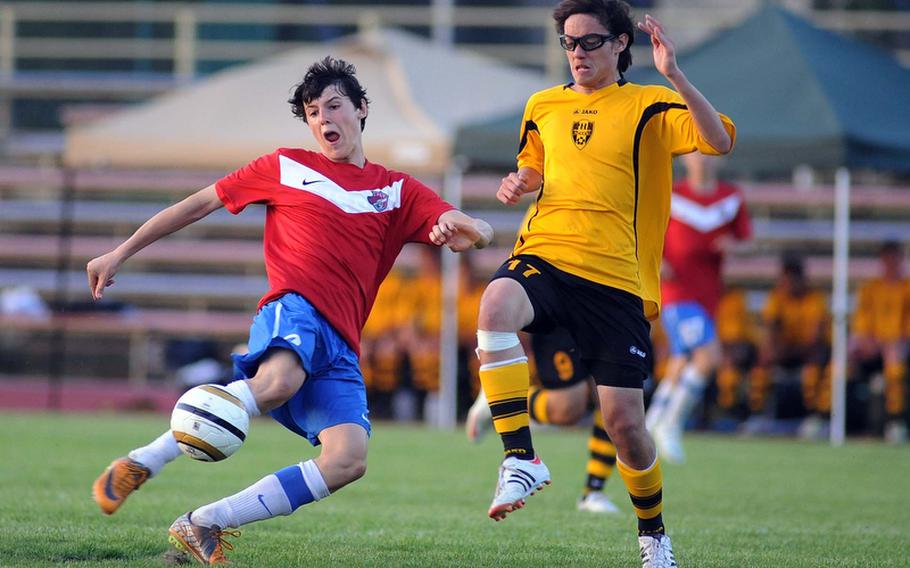 ISB's Alessandro Pryce gets ready to shoot past Patch's Randall Miks in the Division I final at the DODDS-Europe soccer championships. ISB took the title with a 3-0 shutout of Patch. (Michael Abrams/Stars and Stripes)

ISB's Alessandro Pryce gets ready to shoot past Patch's Randall Miks in the Division I final at the DODDS-Europe soccer championships. ISB took the title with a 3-0 shutout of Patch. (Michael Abrams/Stars and Stripes) 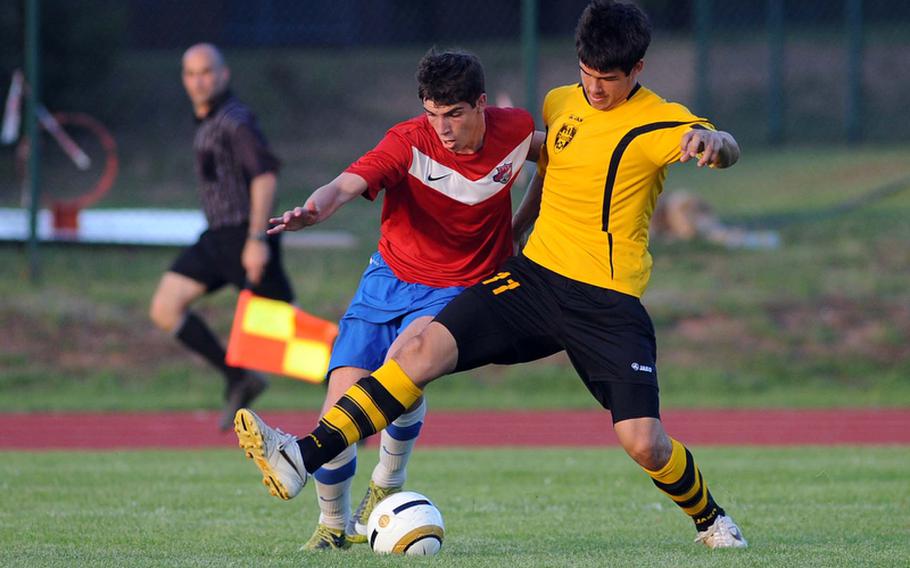 ISB's Christian Faaborg, left, and Patch's Drew Nixon battle for a ball in the Division I final at the DODDS-Europe soccer championships. ISB took the title with a 3-0 win. (Michael Abrams/Stars and Stripes)

The victory, which wrapped up an undefeated 9-0-2 season for ISB, also handed the Raiders their first-ever DODDS-Europe D-I soccer title and completed a sweep by private international schools of the three 2012 boys&rsquo; championships. Earlier Thursday, International School of Florence took the D-III crown, 3-0 over Rota, and Marymount International School of Rome grabbed its second straight D-II title, 1-0 over Black Forest Academy.

The victory also got ISB over the European tourney hump, &ldquo;finally,&rdquo; according to ISB coach Philippe Kaisin.

&rdquo;The last three years, we&rsquo;ve been second, third and fourth &ndash; not in that order,&rdquo; Kaisin said of a team that in the past competed here with many players forced to skip the event because its mid-May dates the past few years conflicted with international baccalaureate exams. &ldquo;This year, they moved the tournament back a week.&rdquo;

Top-seeded ISB, at full strength this time around, turned back No. 6 Patch, Kaisin said, by playing above its experience level.

Thirteen freshmen and sophomores dotted ISB&rsquo;s 2012 roster, but it was two juniors, Krudenier and Pryce, who shouldered the scoring load on Thirsday.

Senior Christain Faaborg, another all-tourney choice, assisted Kruidenier on his first goal, and Kruidenier was quick to point that out.

Tough was the adjective that best describes the task of marking MVP Pryce. Pryce gave a sample of his skills on his goal, when he took a pass down the line from Casper De Bok, dribbled through the defense and into the box from where he flicked the ball off his right foot past all-tourney goalkeeper Zach Runnels. Runnels, seeing De Bok create space for himself in the penalty area, had come off his line quickly, hoping vainly to cut down De Bok&rsquo;s angle.

ISB, coming off Wednesday&rsquo;s 4-0 semifinal romp over No. 4 Vilseck and taking an unbeaten record into the final was playing with confidence, Krudenier said, but confidence only carries a team so far.

Patch, coming into the tournament at 3-1-3, won three games here to complete its first season under coach Bill Ratcliff at 6-2-4.