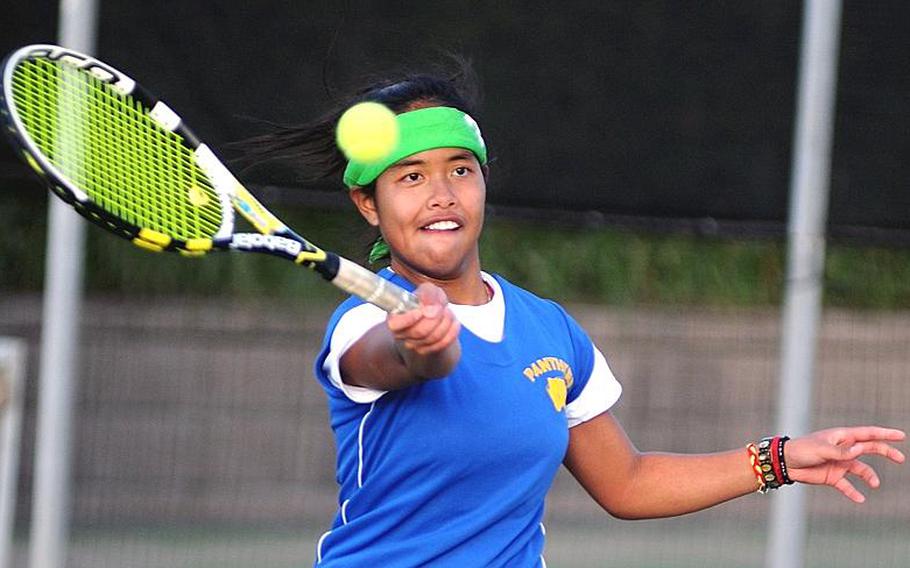 KADENA AIR BASE, Okinawa &ndash; Depending on who you speak with, last spring&rsquo;s reinstatement of international schools to the Far East High School Tennis Tournament is both a blessing and a curse.

&ldquo;It&rsquo;s going to be great to have them,&rdquo; said Robert Bliss, Kadena&rsquo;s coach and co-director of this week&rsquo;s Far East Tournament at Kadena&rsquo;s Risner tennis complex. &ldquo;They have a lot of talented players and we look forward to the increase in competition.&rdquo;

Bliss spoke of St. Mary&rsquo;s and Seisen International and Christian Academy Japan of Tokyo, and Yongsan International-Seoul, the four international schools invited to Far East, which between 2004 and &rsquo;09 was a DODDS-only event, as mandated by DODDS-Pacific officials. That ban was overturned last spring by the Far East Activities Council.

While Bliss welcomed their return, several coaches felt that especially with the presence of St. Mary&rsquo;s Kent Sikama, Stefan Byland and Chae-yong Moon and CAJ&rsquo;s Waturo Ueno, Jesse Hino and Ryo Fuseya, the boys&rsquo; singles and doubles chase will be foregone conclusions.

&ldquo;There&rsquo;s no way we can compete with that. It&rsquo;s a totally different level of play. They&rsquo;re so far out of our league.&rdquo;

Bliss disagrees with Victoria&rsquo;s and Palmer&rsquo;s assessments. &ldquo;Seoul (American) has a strong team and I think Mr. Taylor from Kadena might have something to say about everything by the time it&rsquo;s over.&rdquo;

On the other hand, the DODDS girls&rsquo; field should remain strong, with 2009 semifinalists Amber Gadsden, the bronze medalist from Guam High, and fourth-place finisher Erika Youngdahl of Kadena poised as the top two seeds, with Yokota junior Erika Ettl a shade behind at No. 3.

&ldquo;The girls have a pretty solid three,&rdquo; Bliss said. &ldquo;I expect them to be there at the end, the quarters, the semis, fighting it out for places.&rdquo;

Players this year are required to play doubles and may choose between singles and mixed doubles as options. It&rsquo;s still up in the air at this point whether there will be consolation matches scheduled, DODDS Pacific and tournament officials said.