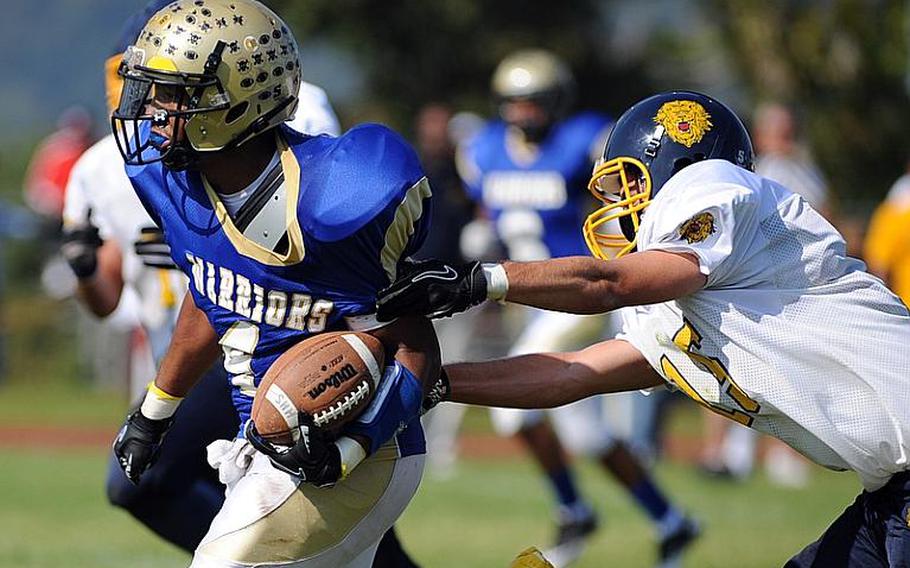 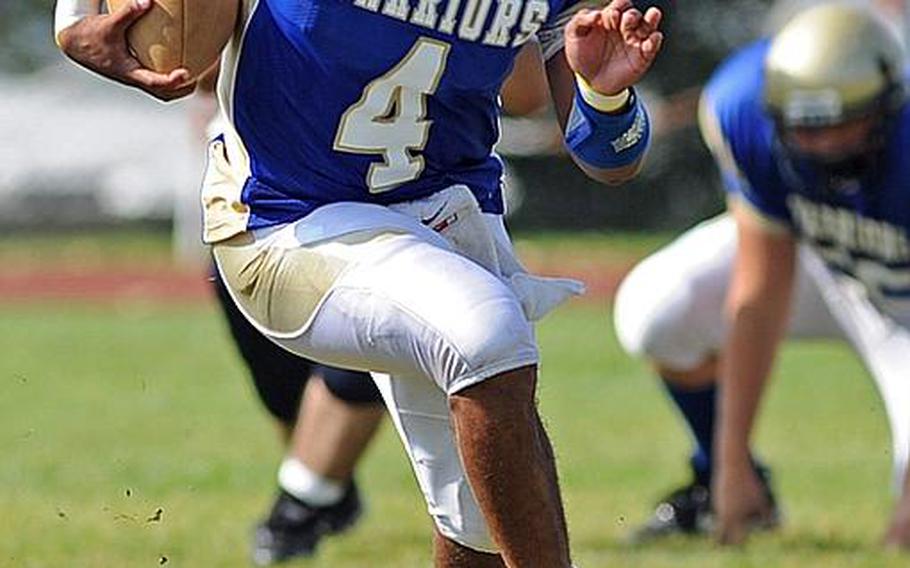 Wiesbaden senior Daniel Harris heads upfield for a big gain in a game against Heidelberg on Sept. 24. (Michael Abrams/Stars and Stripes) 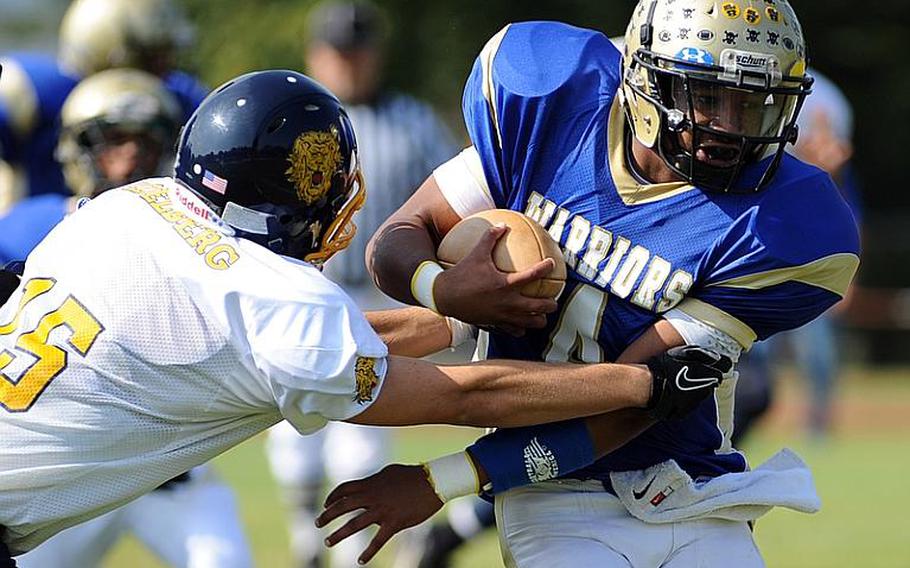 WIESBADEN, Germany &ndash; Wiesbaden senior Daniel Harris Jr. is wrapping up his fourth season of DODDS-Europe football as one of the continent&rsquo;s elite performers.

No surprise about that.

Harris, a two-time All-European 1,000-yard rusher who ran for a school-system best 1,416 yards last season, is gaining ground at an 8.5 yards-per-carry average this season. So far in 2011, he&rsquo;s amassed 669 yards and scored 11 TDs in five games. To put the frosting on that cake, Harris has stepped in as a wildcat quarterback and passed for 210 yards so far this year.

&ldquo;Daniel&rsquo;s strengths are his combination of size and speed,&rdquo; Wiesbaden coach Steve Jewell said. &ldquo;He is the type of back who has the speed (4.5-4.6 for the 40, according to Harris) to run away from you and the strength (205 pounds) to run through you.&rdquo;

What doesn&rsquo;t show up on the stat sheet, scales or stopwatch, however, are the intangibles everyone around Harris sees every day.

&ldquo;I think my biggest thrill at Wiesbaden,&rdquo; Harris said in answer to a pre-practice question last week, &ldquo;is the walk-through with the team before the game. We all come out together. It&rsquo;s really kind of cool.&rdquo;

Here&rsquo;s a guy who routinely leads Europe in the manly art of running the ball through 11 people determined to stop him. A guy who draws cheers directed at him alone by running into the end zone a couple of times a game. A guy who rushed for 192 yards in Wiesbaden&rsquo;s double-overtime near-miss in last year&rsquo;s European D-I title game.

His biggest thrill is being part of the team and sharing the moment with his teammates?

That kind of attitude isn&rsquo;t anything new for Harris, who three years ago deliberately put a sizeable impediment in front of his dream of playing college ball by coming back to Germany after his freshman year at Baumholder.

&ldquo;Actually, I almost stayed in Georgia to live with relatives,&rdquo; Harris said when asked about the difficulties of being noticed by college recruiters on the other side of the ocean. &ldquo;I almost got enrolled in high school there, but I decided I didn&rsquo;t want to be away from my family.&rdquo;

Luckily, Harris hasn&rsquo;t been punished all that badly for his family feeling.

Still, the trans-Atlantic connection is a tricky one for high school athletes.

&ldquo;I keep up with him at Georgia Southern,&rdquo; Harris said. &ldquo;He was my main motivation for a while.&rdquo;

Harris already is following in Wallace&rsquo;s footsteps in the leadership department. He&rsquo;s been one of Jewell&rsquo;s captains all three years he&rsquo;s been a student at Wiesbaden, showing leadership in the high-credibility manner with which he does everything.

&ldquo;I lead by example,&rdquo; he said.

And where he hopes to lead his team this season is a return to the European D-I title game. This time he wants his team, from the smallest D-I school in Europe, to go home with the trophy.

&ldquo;We&rsquo;re such a small school, it takes more work for us to get it done,&rdquo; Harris said, &ldquo;but we want to go out as champions.&rdquo;