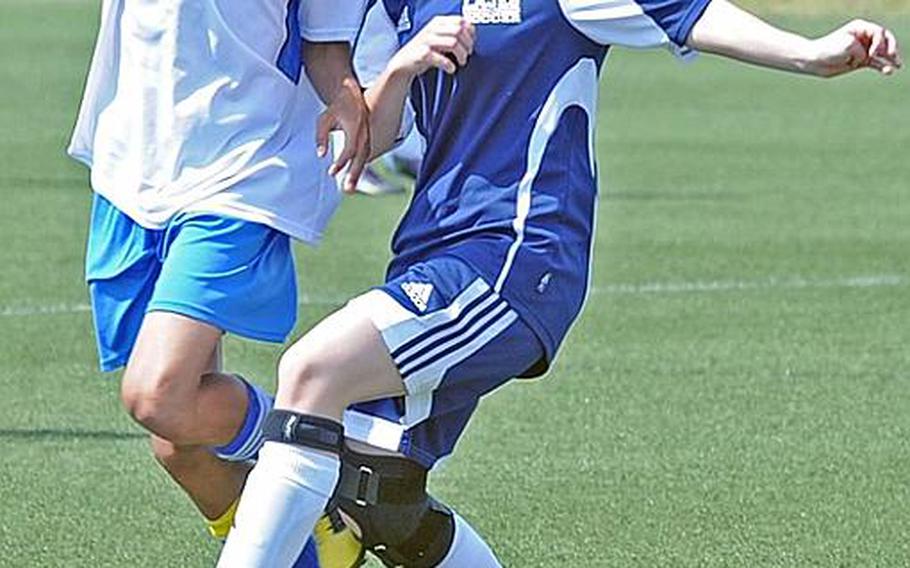 Buy Photo
Incirlik can call itself the European champion of co-ed teams after defeating the other co-ed team at the DODDS-Europe tourney, Lajes, 3-0. Here Lajes' Alex Ciranni, right, battles Incirlik's Aaron Whitaker for the ball. (Michael Abrams/Stars and Stripes)

The victory over the Falcons, the only team besides Incirlik among the 63 teams entered here with a combined-boy-girl team, gave the Hodjas unofficial bragging rights as 2011 European co-ed champions.

&ldquo;It was more fun playing against girls,&rdquo; said Incirlik senior midfielder Mariah Whitaker, whose team downed Rota, 2-1, in Wednesday&rsquo;s opener before falling, 7-0, to second-seeded Sigonella later in the day. Both are all-male teams.

Daniel Buffett scored twice Wednesday for Incirlik in this battle between the eastern and western edges of DODDS-Europe. Buffett nearly added a spectacular third goal when his bicycle kick from the top of the box bounced straight down off the crossbar rather than crossing the line. Aaron Whitaker drove home the Hodjas&rsquo; other tally.

Even with the victory, however, Incirlik probably played its final game of the tourney. The Hodjas opened Thursday&rsquo;s pool play with a 3-0 loss to third-seeded Brussels, and their final 2-2 pool-play record, good for six points, likely won&rsquo;t advance them to Friday&rsquo;s semifinals.

Sigonella, which will take a 3-0 record (nine points) into its pool-play finale this morning against winless Lajes, clinched its spot in the semis by downing Brussels 2-1 Thursday. It will take an upset of Brussels (2-1) by Rota (1-2) on Friday morning to force a three-way tie for second and keep Incirlik alive in the tiebreakers.

All that&rsquo;s neither here nor there, however, to Incirlik freshman midfielder Allyn Anderson, another of Incirlik&rsquo;s female stalwarts.

&ldquo;I&rsquo;m very excited,&rdquo; she said. &ldquo;It&rsquo;s been a very long time since we won here.&rdquo;

Does that make the long trip to Germany worth it?

&ldquo;It&rsquo;s actually fun,&rdquo; Anderson said of the trip from southeastern Turkey. &ldquo;It gives us a chance to get away from home.&rdquo;