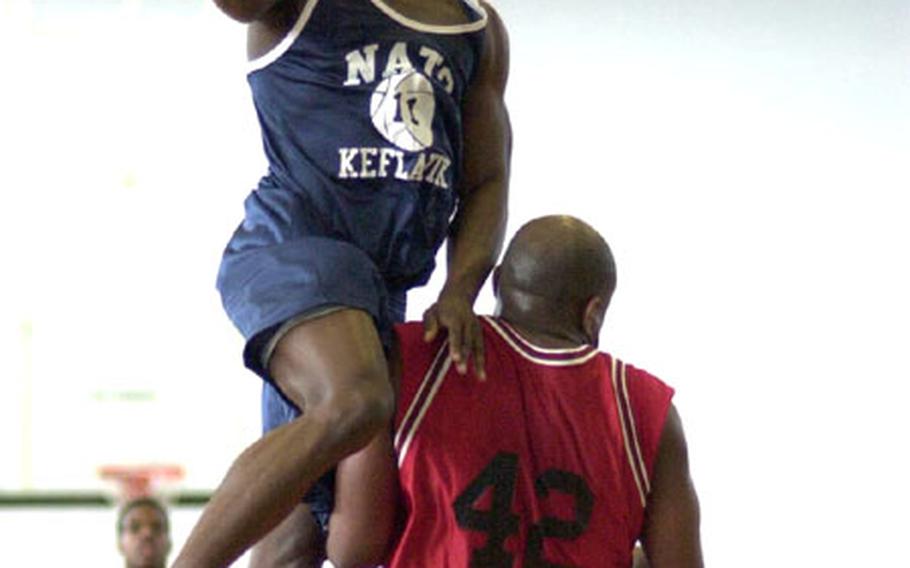 KAISERSLAUTERN, Germany &#8212; Down 12 points with just less than 13 minutes left in the championship game of the 2003 USAFE Small Unit basketball tournament, the Keflavik Vikings weren&#8217;t entertaining any notions of losing for the first time in the six-day event.

&#8220;We just had to keep pushing, keep running and play good defense,&#8221; Keflavik point guard Mark Douglas said after the Iceland-based airmen defeated the Alconbury Spartans, 90-84, to win the title Sunday. &#8220;We knew we could come out with a victory.&#8221;

After trailing 65-53 at the 12:56 mark of the second half, Keflavik went 12-for-16 from the foul line. Guard Kyle Krieman led the way with 5-for-5 free-throw shooting during the rally and 7-for-7 for the game, all in the second half. Krieman, who finished with 15 points, hit four foul shots in the final minute as the Vikings put the game away.

While Krieman and 15-point scorer Otto Montgomery were hitting from the free-throw line, their teammates were taking command of the boards.

Thomas Hardy had seven of his 11 rebounds during the comeback run, and Joshua Long, who scored a team-high 22 points, had five more. Douglas grabbed a huge offensive rebound that led to a three-point play to start the comeback.

Alconbury, like Iceland undefeated going into the final game, regained the lead at 83-80 on a three-pointer by Barnabus Roundtree, who led all scorers with 33 points.

But Douglas, who finished with 16 points, hit a pair of shots to regain the lead. He also handled and distributed the ball flawlessly with the game on the line.

The Vikings sharpened up for the title game with two wins against defending champion Rhein-Main. Keflavik, which had one practice as a team before the tournament, dispatched Rhein-Main 77-72 in the pool-play finals on Friday and 81-67 in Saturday&#8217;s semifinals.

Alconbury beat Geilenkirchen 76-71 in its semifinal game of the nine-team tournament.

Douglas said he didn&#8217;t care who took the floor against the Vikings.