Hurdles high for creation of a Far East track meet 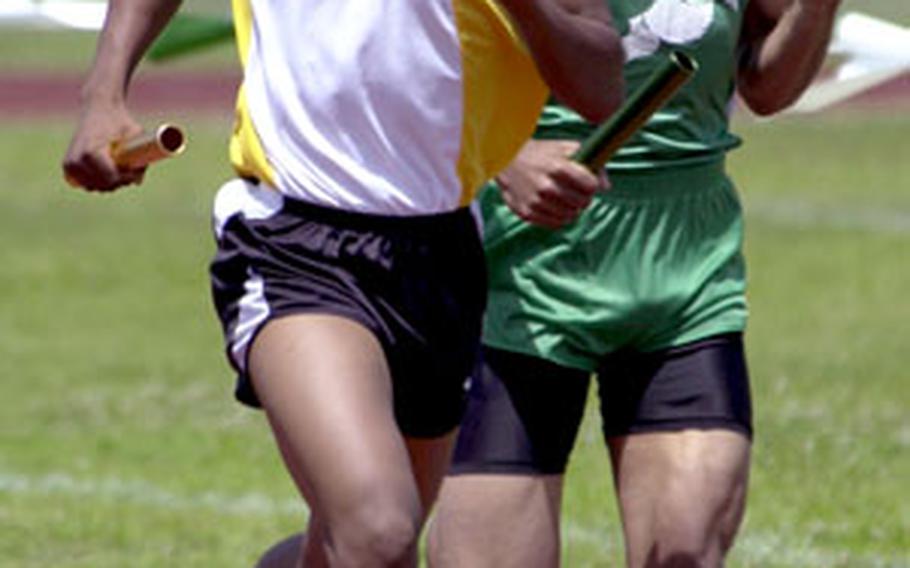 Kadena junior Manuel Duran and Kubasaki senior Steven Thompson chug for the finish line in the 1,600 relay in the Petty Memorial track meet. That event is the closest thing to a Far East meet the sport has. (Dave Ornauer / S&S)

The Far East Activities Council simply lacks the money for such an event, DODDS-Pacific officials say. And just three DODDS schools in Japan and two on Okinawa have track teams.

But Kubasaki coach Charles Burns, Kadena coach Sergio Mendoza and a few others buy neither argument. Fresh from last weekend&#8217;s fourth Dr. Alva W. &#8220;Mike&#8221; Petty Memorial Meet, with 13 teams and 255 athletes, they contend the sport isn&#8217;t getting its due.

Mondoza challenged DODDS officials &#8220;to take a look at these kids and tell me what makes them so different that they can&#8217;t have a Far East.&#8221;

The Petty meet, however, included mostly non-DODDS schools and athletes. Only Kadena and Kubasaki competed of the five schools that have track programs.

Burns countered that his proposal addressed budget concerns. It called for holding a meet at Yokota. With most existing track programs in the Tokyo-Kanto Plain area, travel would have to be funded for just Kadena, Kubasaki and Guam High, which currently does not even have a track program. Each school would be limited to just its top two league or district finishers and the meet would be held on Friday and Saturday.

Still, there are just five schools with track teams, far fewer than other activities for which there is a Far East event.

And then there are the questions as to the type of meet and who would be invited.

One athlete sympathetic to both arguments is Kadena junior Jeff Morton, who competed in the last two Colorado state track and field championships before transferring to Kadena High over the summer.