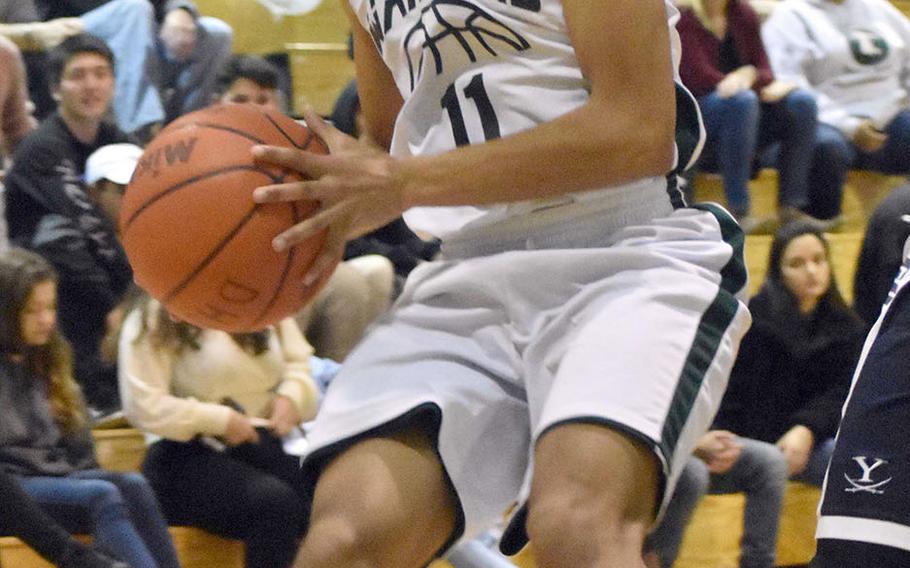 Senior Davion Roberts of Nile C. Kinnick was named the Most Valuable Player of last year's Far East Division I Tournament and returns as one of the Red Devils' key outside options. (Emmanesta Stovall/Special to Stripes) 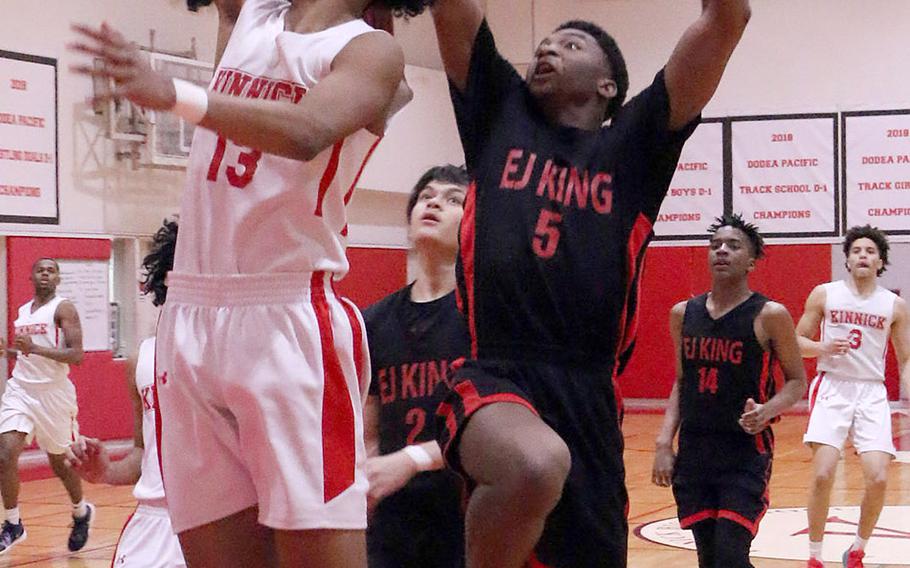 Sophomore Kaine Roberts is one of several outside options for Nile C. Kinnick, one of the Far East Division I Tournament favorites; senior Dyson Robinson (5) is a centerpiece player for Division II favorite E.J. King. (Emmanesta Stovall/Special to Stripes) Joey Betts is the outside half of Osan's inside-outside combination heading into the Far East Division II tournament. (Kelly Kenyon/Special to Stripes) Daniel Jamerson could be the threat Osan needs to shut down E.J. King's Dyson Robinson in the Far East Division II tournament. (Kelly Kenyon/Special to Stripes) Casey Cox is one of a handful of backcourt options for Kadena heading into the Far East Division I tournament. (Mary Obsuna/Special to Stripes) 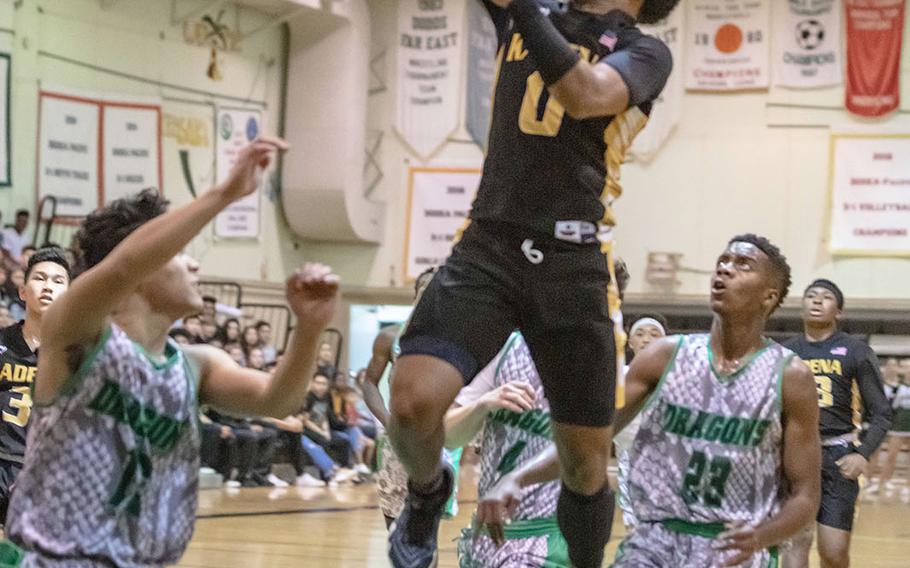 Senior Eric McCarter is one of a handful of backcourt options for Kadena heading into the Far East Division I Tournament. (L.J. Hollingsworth/Special to Stripes) 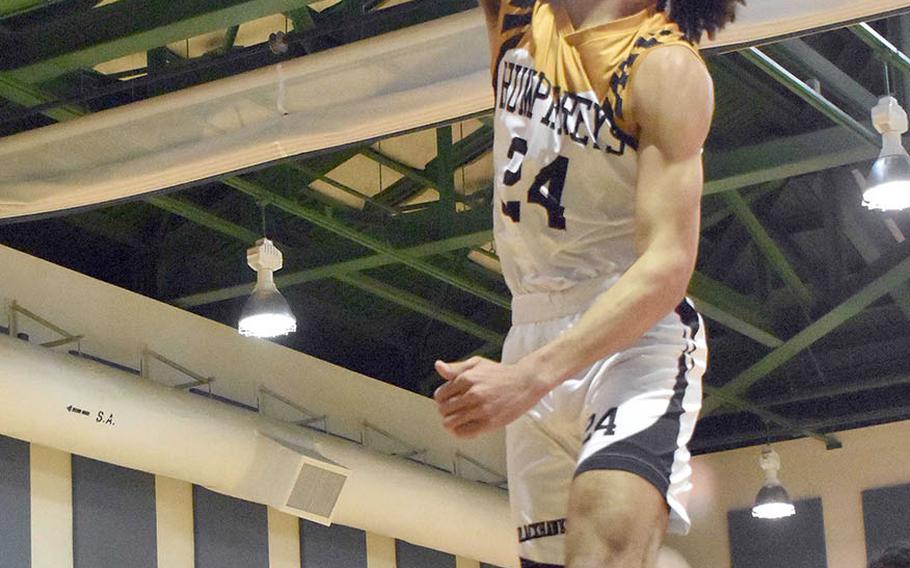 Senior Quintin Metcalf has averaged 24.3 points and 10.4 rebounds for a Humphreys team that's 25-0 and enters the Far East Division I tournament at Humphreys as a favorite. (Mary Sarantakes/Special to Stripes) Senior Quintin Metcalf has averaged 24.3 points and 10.4 rebounds for a Humphreys team that's 25-0 and enters the Far East Division I tournament at Humphreys as a favorite. (Mary Sarantakes/Special to Stripes)

The two teams carry a combined 48-2 ledger into the Far East D-I and D-II tournaments, which begin Thursday on Camp Humphreys. D-I features a true round robin with the top four qualifying for the title. D-II features pool play followed by single elimination with consolation.

King and Humphreys went unbeaten against their respective divisions. The Blackhawks won or shared the Korea Blue Division regular-season title for the fourth straight season and won last month’s Kanto Classic. The Cobras went 23-0 vs. D-II foes, winning by an average 21.22 points.

“We have a target on our backs,” first-year Cobras coach Travis Elliott said. “We have everything to lose, and they (opponents) have nothing to lose. We’re unbeaten in D-II, we have to practice hard and work on every aspect of our game.”

Though Elliott is new to the Cobras’ reins, much of the team that won Far East D-II in 2016 and contended last season returns, led by senior center Dyson Robinson, who has averaged 31 points and 12 rebounds per game since Jan. 4.

So, how does such a team keep things in perspective, as the Cobras and Blackhawks must for three days this week?

“When you’re at the top, you have to stay humble, have that same drive for perfection as when you started, keep the same work ethic that got you there, and that falls back on me,” fourth-year Blackhawks coach Ron Merriwether said.

Still, there are few secrets to a Humphreys team that has played against four of the other six teams in the D-I tournament. The Blackhawks have yet to see American School of Bangkok but did get to scout American School In Japan in the Kanto Classic.

Humphreys (25-0) is led by two-time Far East Most Valuable Player Quintin Metcalf, the only boys player to earn MVPs in both divisions.

As a team, the Blackhawks outscored their opponents by 41.9 points per game, averaging 84.5 points on offense shooting 68 percent from the field.

Kanto Classic observers said the Blackhawks don’t have the guard play they did last year in Brice Bulotovich. Merriwether argues otherwise, what with Connor Coyne (6.3 points, 4.6 rebounds), Kemhari Pruitt (5.3 points) and transfers Miguel Villareal and Devyn Lewis on the roster.

“The guards are definitely there. They give me what I need at the position,” Merriwether said. “You have to make the adjustments and look for ways to exploit the weaknesses of the opponents.”

One team believed to have a shot at taking down the Blackhawks is DODEA-Japan and Kanto Plain champion Nile C. Kinnick. Kinnick lost twice to Humphreys in the Kanto Classic, but one of those games went to overtime. And the Red Devils split two games with King.

“It’s definitely hard to beat a team three or four times” in one season, Merriwether said. Kinnick and the Blackhawks square off at 7 p.m. in a round-robin contest. “It’s how well they can shoot the three and how well we can defend the three.”

Though Elliott is new to King, he’s not new to the Pacific, having played for Matthew C. Perry in 2000. The same assistant coach who was there two years ago, Robert Sipplin, remains. Alongside Robinson are double-digit scoring regulars Jalen Nall, Isaiah Williams and James Meacham. Nall scored 35 points in King’s 74-58 home win Friday over Robert D. Edgren.

On paper, the Cobras are by far and away the winningest team in D-II.

“We’re trying to open up the other guys to see what they can do besides Dyson, who is no secret,” Elliott said.

Edgren features transfer stars Chauncey Williams, Quan Thompson, Riley Palfy and Amos Alsvig, any of whom can get hot at any time.

“Our goal was to win Far East; we set that from the first practice and we’ve been serious about it the whole way,” Elliott said. “We’re not sleeping on anybody.”