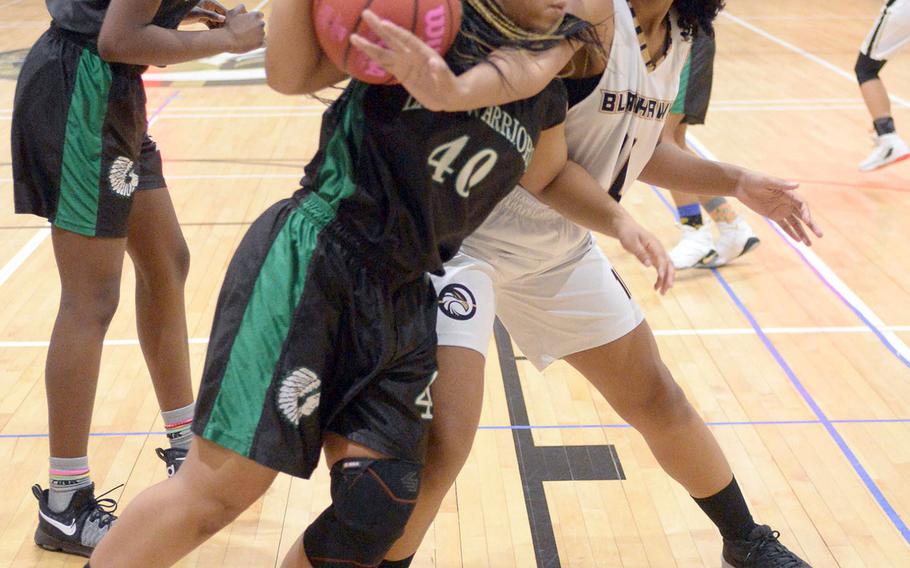 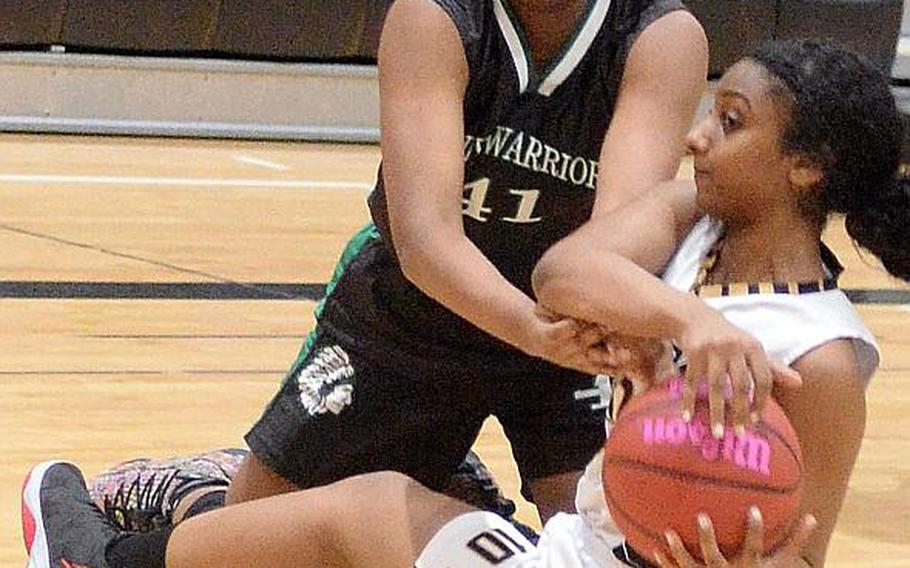 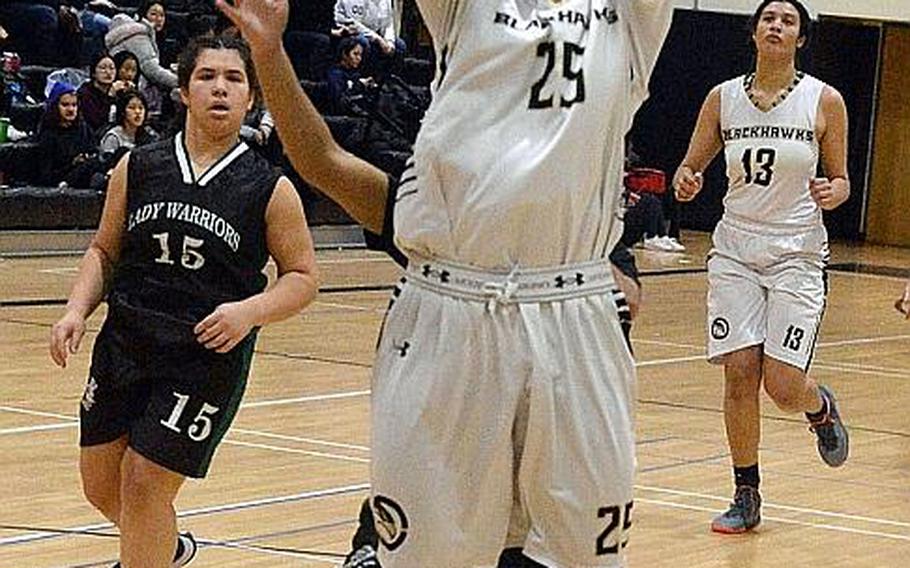 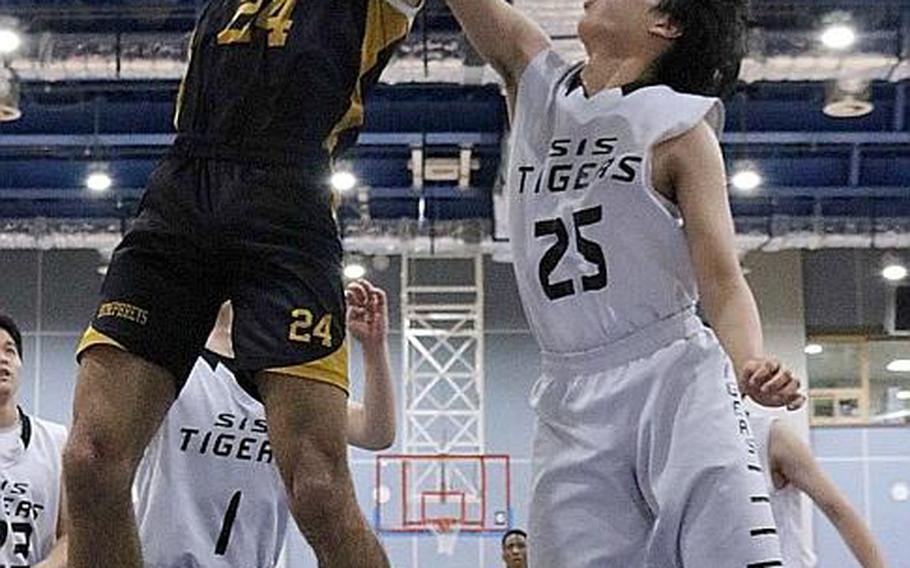 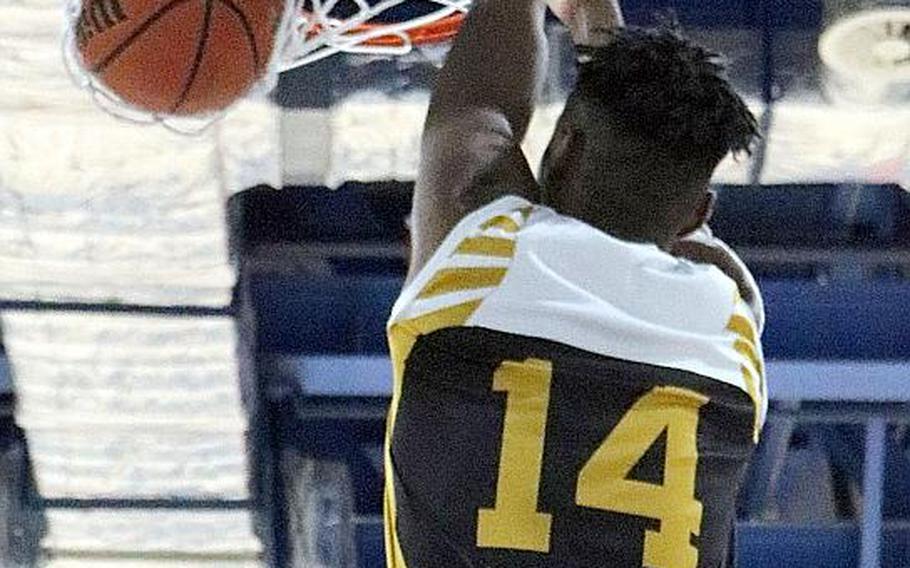 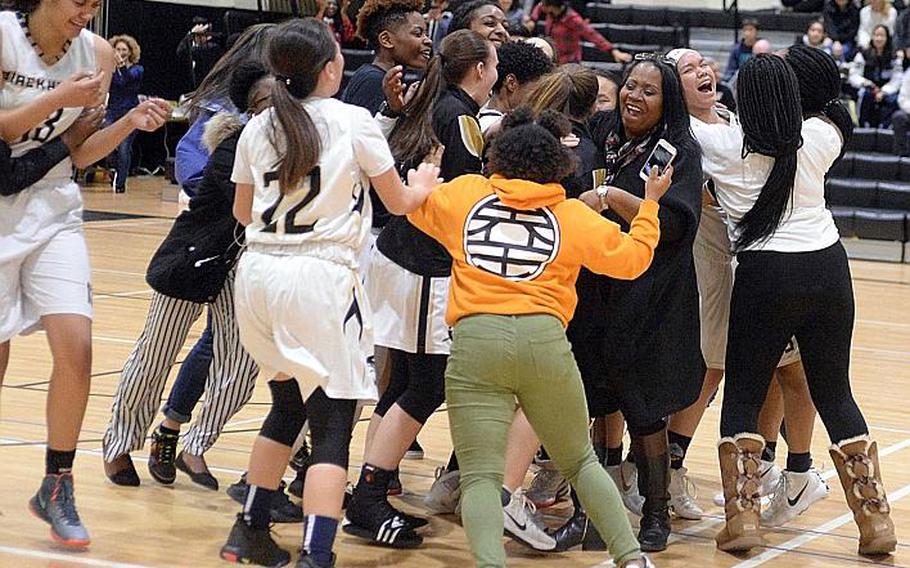 Humphreys' girls basketball team did that aplenty in the second half of Saturday’s final in the Korea Cup Tournament, enough for Goodwater to score 14 second-half points - eight in the fourth quarter - as the Blackhawks rallied past top-seed Daegu 62-53 on their home court.

“It was all Chakhira,” senior center Ebony Dykes said of Goodwater, who by coach Steve Boyd’s design stationed herself upcourt throughout the second half, awaiting bullet passes from teammate Maria Bruch.

“Money,” Bruch said of the coach’s tactic and Goodwater’s execution. “I knew she would come through. I thought that Coach Boyd was so smart to come up with that.”

That strategy resulted in the Blackhawks’ winning their first Korean-American Interscholastic Activities Conference postseason title. It was also the second loss on the day for the Warriors, who had entered the tournament unbeaten at 12-0 on the regular season.

All told, DODEA-Korea teams enjoyed a red-letter weekend in the four KAIAC basketball tournaments. The Blackhawks won the KAIAC Cup Tournament for teams over .500 across the league’s three divisions.

In the KAIAC Plate Tournaments for sub-.500 teams, Daegu won the boys title, edging Taejon Christian 74-69 in overtime. Seoul American, in its last year as a school, took home the girls Plate title 45-28 over Osan.

Humphreys’ girls lost twice to Daegu during the regular season, but Boyd said there was a silver lining to those defeats.

“A lot of times, you can learn from a loss,” said Boyd, in his first season coaching Humphreys’ girls after 15 years coaching Seoul American’s boys. “The girls have really improved over the course of the season.”

Boyd credited the many games his Blackhawks played a weekend earlier in the American School In Japan Kanto Classic. “We got some quality games there and the girls improved a lot from that,” he said.

And central to the Blackhawks’ success on Saturday were four former Seoul American players – Bruch, Goodwater, Dykes and Alex Easterling.

“It feels amazing,” Goodwater said, “especially because I’m a senior and we won KAIAC for the first time.”

The teams traded the lead seven times and the game was tied twice before Dykes hit a rebound layup to put the Blackhawks ahead to stay 51-50 with 4:10 left. Bruch hit a three-pointer and Goodwater netted two layups to make it 58-53 with 2:18 left.

Dykes had 20 points, Goodwater 18 and Bruch 14. For the Warriors, Bethani Newbold, named the tournament’s MVP, had 24 points, 11 in the second quarter, and Dai’Ja Turner had 18 points and 14 boards.

Despite the defeat, the Warriors, comprised mainly of underclassmen, are one of the favorites to win the Far East Division II Tournament later this month on Okinawa. “You’ll be hearing from them again,” Daegu first-year coach Jonathan Van said.

At Yongsan International, Quintin Metcalf, named the tournament’s MVP, had 19 points, 10 rebounds and five steals to lead three players in double figures for the Blackhawks in their one-sided victory over the Tigers.

The league’s mercy rule was invoked with 5 minutes left in the third period and the Blackhawks coasted from there. Jalen Hill had 12 points and Kemhari Pruitt 11 for Humphreys.

“Especially for my returners, this was one more step in the right direction to get the ultimate goal” of winning the Far East Division I Tournament, Blackhawks coach Ron Merriwether said. “I’m more happy for the girls, though.”

At Seongnam, senior Elijah Bembischew capped a huge week by earning MVP honors as Daegu’s boys survived a close shave with TCIS. The Warriors did not lead at all during regulation, but they knotted up the game and outscored the Dragons in extra time, when it counted.

“He really lit it up this tournament,” coach Blake Sims said of Bembischew, who averaged 22.6 points and 17.3 rebounds and earned MVP, Best Rebounder and Top Gun honors. “A lot of hardware. He earned it, too.” Sam Murphy added 19 points and J.B. Pope 16 for Daegu.

Seoul American’s girls went unbeaten in KAIAC Plate play, capped by their 17-point win over the Cougars, at Chadwick. The Falcons have won seven of their last eight games after starting the season 1-6.

“It feels like justice and a culmination of how well I know this team can be,” Falcons coach Eddie Rozzi said. “I’ll put our defense and hustle up there with any team in the league.”

The next destination for the victorious DODEA teams is Far East, the Divisions I and II tournaments for boys at Humphreys and the D-I and D-II girls tournaments at Kadena.

“Every time they go out there, the guys keep working hard and keep improving,” Edmonds said. “I’m so proud of them.”

It was the first time the Eagles placed higher in such a tournament than Kinnick and St. Mary’s. Kinnick finished second, with American School In Japan third and St. Mary’s fourth.