Humphreys getting a kick out of first female football player 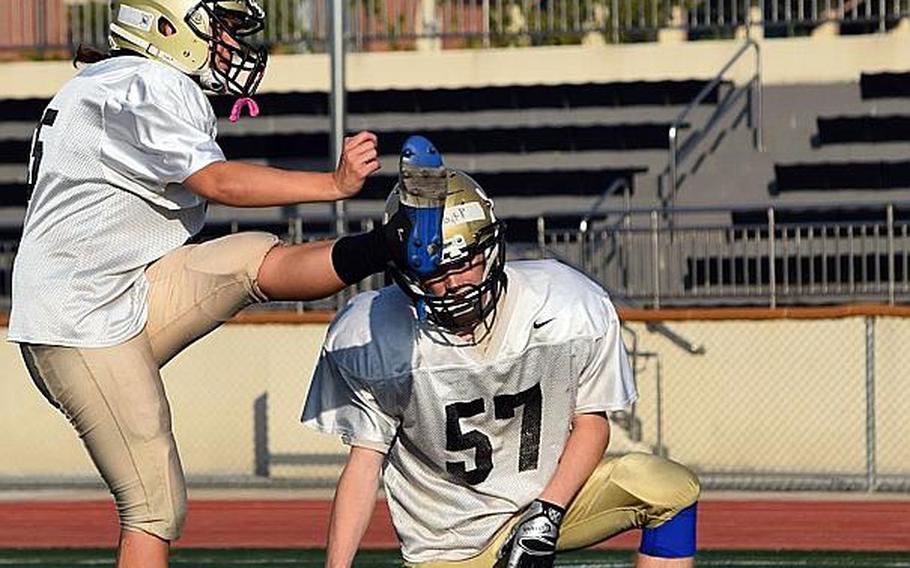 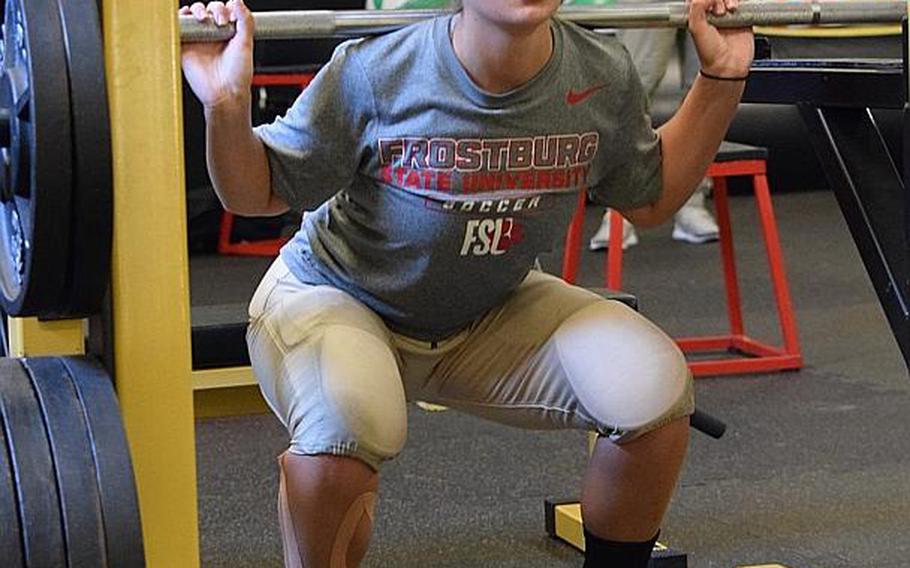 Elayna Snyder, a Humphreys senior, spends time in the weight room to strengthen her body for the rigors of not just placekicking, but for other special teams duties, including tackling on kickoffs. (Haley Hartsough/Special to Stripes) 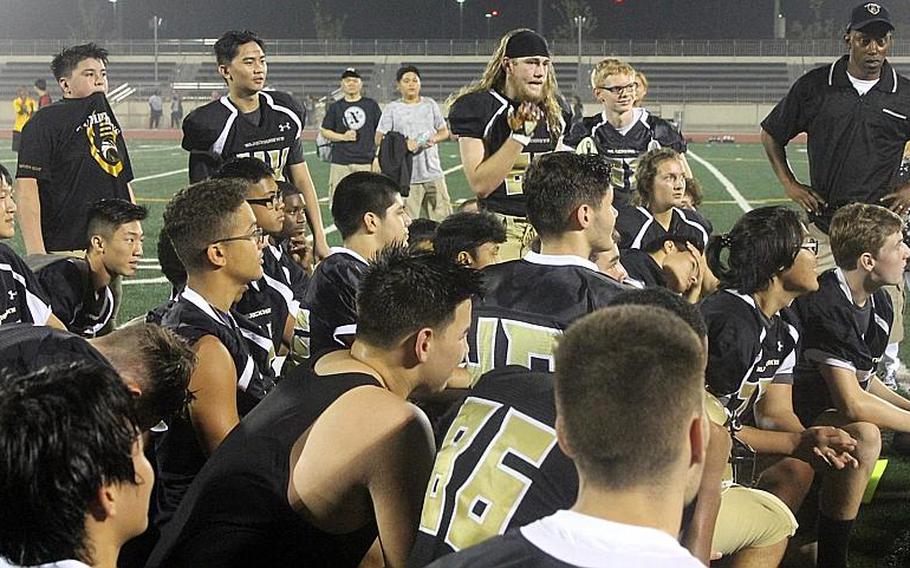 Elayna Snyder’s first big football moment didn’t start out as she envisioned it would.

Her Humphreys Blackhawks trailed much of the way against Kubasaki and had gone ahead 6-5 on a touchdown run by quarterback Miles Brice. The only girl on the team, the senior was trying to make the lead two points – and she miscounted her steps as she approached the ball to kick the extra point.

“But when the ball was snapped, all I knew was to keep my head down and drive through the ball” as her coaches taught her, Snyder said.

“When I saw it go near the bottom of the uprights, I thought for sure it was going to hit and not go in. When it went in, I was so excited, but more importantly, I knew my teammates, coaches and parents were even more excited for me.”

That was evident when players surrounded her for a group hug, high fives and fist bumps, and big, noonday-sun smiles from her coaches Steve Elliott and Ron Merriwether.

The Blackhawks would go on to win, 13-11, in their first meeting with Kubasaki. The celebration lasted the weekend, even into Monday, when her English teacher, Clara Davis, congratulated the football players in the class on their victory.

“Hey, why didn’t you say anything to Elayna?” teammate Lorenzo Cordero asked Davis.

“Oh, so you’re the girl who’s on the football team!” Davis said. “Well, congratulations to you, too!”

In the three-year history of Blackhawks football as a varsity program, Snyder is the first female to suit up in black and Vegas gold.

“What makes her so special is the fact that she makes it not about her,” said Elliott, the head coach. “She makes it about the team. She’s out there to add a dimension to the team, in any way she can.”

Toward that end, Snyder says she wants to kick field goals of long lengths, not just chip-shot extra points. And Snyder lines up in fake extra-point/two-point conversion formations as well, Elliott says.

“You can’t count her out on anything,” he said. “We had her doing tackling drills. At some point, she’ll be on kickoffs, so she’ll have to make tackles. She’s there to do whatever it takes to make the team better.”

Making the conversion from soccer to football has involved something of a transition for Snyder.

“Elevation and power” have been the biggest issues, Snyder said. “In soccer, it doesn’t have to go very high, but it needs to go far. Thankfully, I have the accuracy and some distance thanks to soccer.”

Merriwether, who has coached professional teams in Europe and the States in basketball and football, took Snyder under his wing when she first came out for football at Humphreys and has worked with her on increasing lift and power on her kicks.

“Kicking a soccer ball is a little different, so translating that over to kicking the football was her biggest challenge,” Merriwether said.

There’s been weight-training, twice a week, to build strength in Snyder’s lower body. Non-step kicking at close range helps her build lift. They’ve worked on kicking from both hashmarks, even from the sideline to help her with angling the ball, Merriwether said.

“The strength training is paying off,” he said. “I believed it would take two weeks to see results. As of now, she’s out to 30-plus yards.”

“It is working,” Snyder said.

She played her freshman and sophomore seasons of soccer and swimming for John Hardin High School in Elizabethtown, Ky.

Snyder spent half her junior year at International School Kuala Lumpur in Malaysia before her father, an Army colonel, transferred to Humphreys last winter.

It was at John Hardin that she suffered a bone contusion in soccer, and instead of brooding about how much time she missed due to the injury, Snyder said she became “immediately attracted” to the methods used to heal injured athletes properly and quickly.

“I asked a bunch of questions, and thankfully, my physical therapists weren’t too annoyed,” Snyder said. She now wants to pursue occupational therapy as a career, “helping people relearn basic or not-so-basic things after an injury.”

With the team fully behind her. “She’s a coach’s dream, no matter what sport it is,” Elliott said.