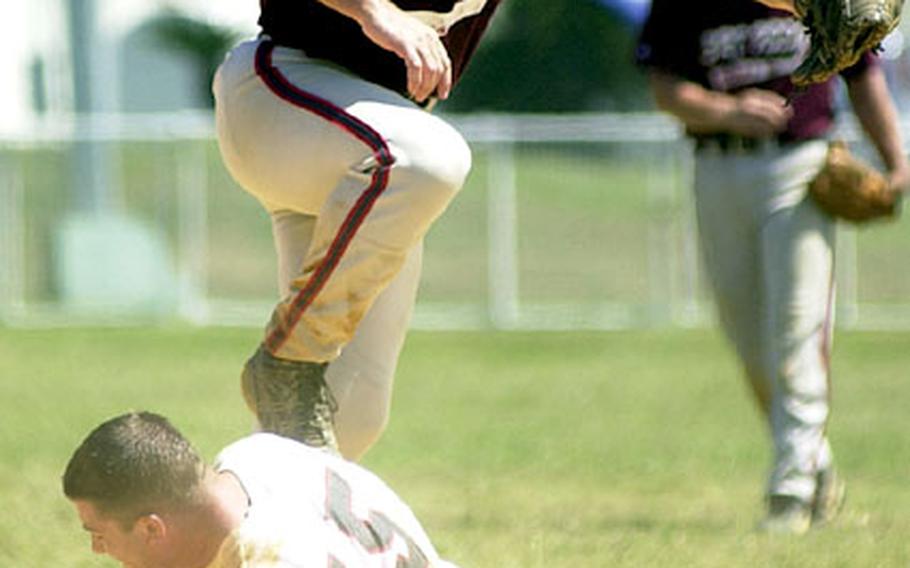 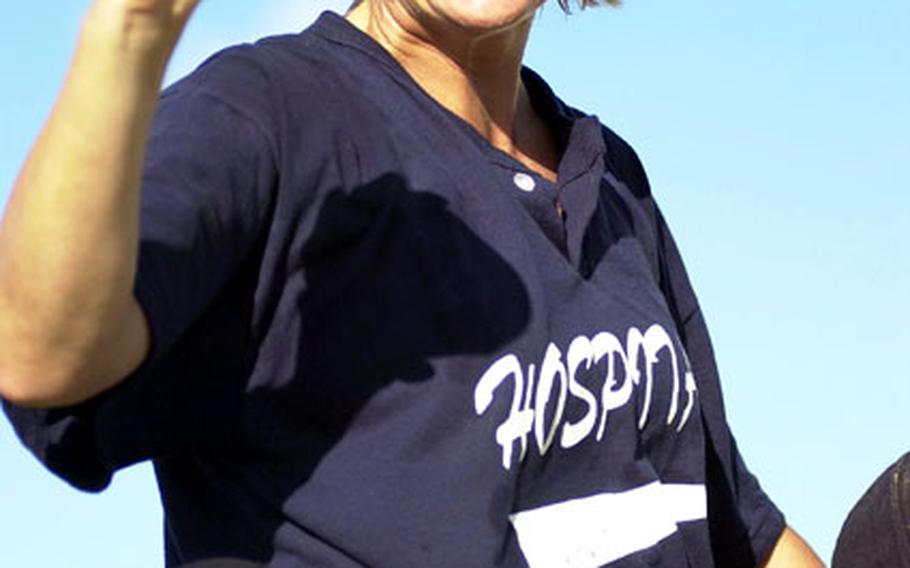 Pitcher Rachelle Smith of U.S. Naval Hospital Camp Lester holds the game ball while riding on the shoulders of two teammates during the celebration after their 17-15 win over Iwakuni Air Station during Wednesday&#39;s round-robin play. It was Hospital&#39;s first victory in a tournament game since 1993, a stretch of 82 games. (Dave Ornauer / S&S)

Messer came off the bench to hit a double and run-scoring single in an 11-run sixth inning that pushed Hospital past Iwakuni Air Station 17-15 for its first victory in the Marine Forces Pacific Regional Softball Tournament since 1993.

So is a history of failure that spanned nine tournaments and the first two days of this year&#8217;s regional. Hospital had lost 82 straight games dating back to two victories in the 1993 tournament.

Painful could describe the tournament&#8217;s first two days for Messer, a lieutenant commander from Philadelphia and the island&#8217;s only child psychologist.

On Monday, Messer, the team&#8217;s regular pitcher, fielded a screaming line drive off the bat of 3rd Force Service Support Group&#8217;s Benji Hammond. The hit bent Messer&#8217;s wedding band, a gold-platinum composite. Later, warming up for another game, he caught a ball and felt his watchband break apart.

All that on top of losing those first four games.

On Wednesday, Hospital trailed Iwakuni 14-4 and seemed doomed to lose its 83rd straight tournament game until Messer led off the sixth with a double. Hospital send 14 batters to the plate in the inning.

A handful of distraught Iwakuni players declined to comment on the loss, but cleanup hitter Luther Gibbs offered praise.

Hospital&#8217;s winning ways ended quickly with a 21-0 loss to Marine Corps Base Hawaii.

The win gave 3rd Force a 6-0 round-robin mark and the top seed in the double-elimination playoffs, which begin Thursday.

The top seed has been a kiss of death in past years. From 1997-2001, the top seed failed to win the title, with 3rd Force falling in a two-game championship bout in 2001.