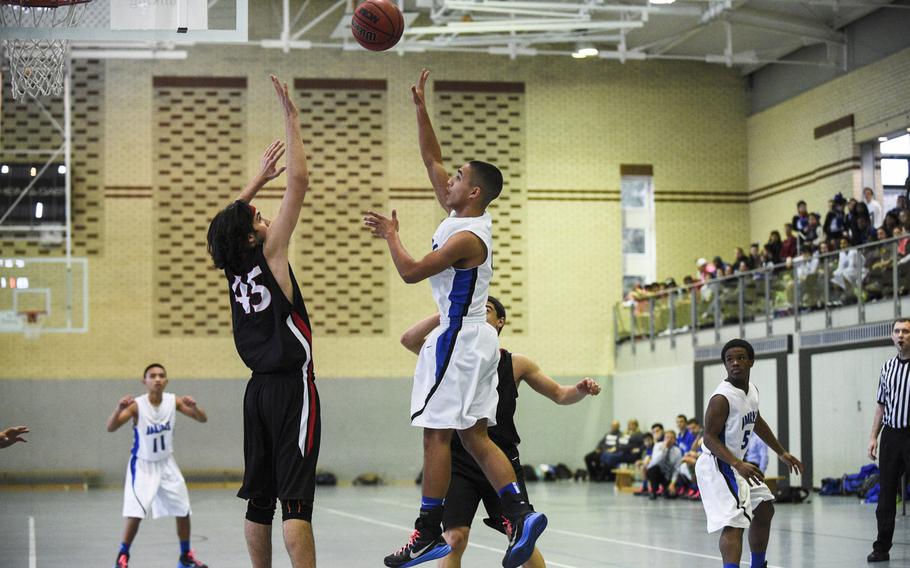 Buy Photo
Rota's Jashaun Garrison floats the ball over AOSR's Francesco Gristina at last year's DODDS-Europe basketball tournament at the German Police Academy at Mainz-Kastel, Germany,Thursday, Feb. 19, 2015. This year's championships will be held at two locations in Kaiserslautern, at McCully Barracks in Wackernheim and at Wiesbaden's high school and Clay Kaserne fitness center. (Stars and Stripes)

The first two days of the four-day event, set to run Feb. 24-27, will be split between Wiesbaden and the Kaiserslautern Military Community, a notable departure from the tournament’s usual structure.

Typically, the tournament is played entirely in the Wiesbaden area, with DODDS-Europe using local German facilities during the busy preliminary rounds to supplement the courts at Wiesbaden High School, Clay Kaserne and McCully Barracks.

This year, all of the games will be played in gyms on American military bases, necessitating the expansion to the KMC, which is just over an hour’s drive south of Wiesbaden. The elimination rounds scheduled for Friday and Saturday will still be hosted by Wiesbaden High School and Clay Fitness Center.

The decision to shift the entire event behind U.S. fences was made amid concerns about the current security climate in Germany.

“DODEA-Europe seriously takes precautions for all off-base events hosting large gatherings of DOD personnel and works closely with local installations that are responsible for force protection‎ and in approving those events in their area of responsibility,” Bill Heiges, Antiterrorism/Security Program Manager at DODDS-Europe, said in a statement to Stars and Stripes. “This process ensures we can provide the safest venues for our academic and athletic events and periodically it is determined that holding the event on base is the best security-minded course of action.”.

With that mandate in place, DODDS-Europe Athletic Director Karen Seadore made the decision to move the first two days of Division I boys and girls games to Kaiserslautern, despite some hesitation about breaking up an event billed as an opportunity to unify DODDS-Europe’s widespread group of student-athletes.

Ultimately, logistical necessities took precedence, particularly when combined with the financial savings DODDS-Europe will reap by having Kaiserslautern and neighboring Ramstein stay close to home for the early days of the Division I tournament.

“I do have some concerns and gave this a great deal of thought, but we need to have six courts to accommodate all of the games on Wednesday and Thursday,” Seadore said. “With Kaiserslautern being the closest community that seemed like the logical thing to do.”

Besides, it’s possible that the ideal of hundreds of military kids from small and large schools bonding over basketball won’t be greatly affected by the change, and may have been overstated in the first place.

“It’s a unique experience to see so many schools gathered at one location for the championship,” Lakenheath girls coach Jon Mittenzwey said. “But on the other hand, it seems that so many schools leave when they’re out anyway, leaving the same schools to see the end of the event every year.”

Aviano boys basketball coach Kevin Lehde is the former coach at Incirlik, a remote DODDS-Europe school that rarely sees regular-season competition aside from Turkish neighbor Ankara. While that would hypothetically make Incirlik one of the primary beneficiaries of the tournament’s social atmosphere, Lehde’s experience was different.

“I do not believe it detracts at all. You’re always confined to your own game site anyway...You have no idea what’s happening at the other sites,” he said. “After the games, I’m with the team at the hotel keeping the kids under supervision.”

In that sense, this tournament is business as usual for DODDS-Europe’s non-Division I schools.

“This only affects DI schools,” Bitburg boys coach Nate Goolsby said. “It is not a factor for us in DII.”

Division I coaches are similarly unperturbed by the news.

“The teams that are capable of winning the championships can play at any venue,” Wiesbaden girls coach Jim Campbell said. “The best teams will rise to the top in pool play regardless of the gyms or locations they play in.”

While largely ambivalent about this year’s changes, there is one aspect of tournaments past that many DODDS-Europe coaches are glad to see go away: the increasingly infamous Polizei Academy in Mainz, used in recent years as a venue for preliminary games. While a few coaches harbor fond memories of the unorthodox gym, most are happy to see the Academy benched, citing its playing surface, stiff rims, cramped sidelines and problematic location in the thick of city traffic.

“I was pleased to see that we will no longer be playing at facilities that are not regulation for high school basketball,” Kaiserslautern boys coach Corey Sullivan said, pointing out the Polizei Academy’s trapezoidal lane and three-point line marked at international distance. “Not that those are huge changes, but they are significant.”

Seadore said that the decision to split the tournament between Kaiserslautern and Wiesbaden applies to this specific event only; the sites for next year’s hoops tournament and this spring’s similarly-structured European soccer tournaments have yet to be finalized. Other sports, such as football and volleyball in the fall and baseball and softball in the winter, are already played entirely on base.

In the meantime, it’s hard to find a voice strongly arguing against the concept of hosting DODDS-Europe athletic events exclusively on U.S. military bases.

“We have the facilities,” Baumholder girls coach Matt Martinez said. “So why not use them?”