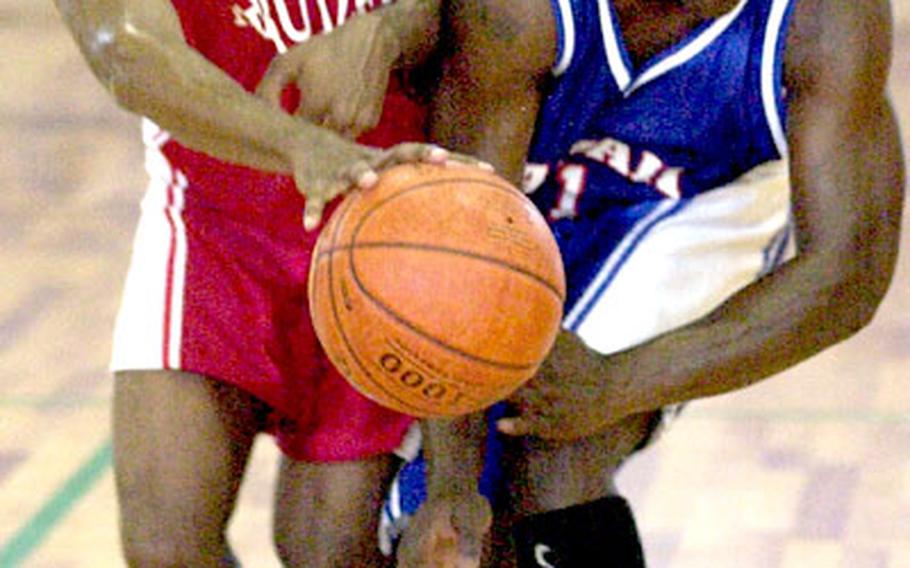 (Summaries of Tuesday&#39;s games at end of story)

CAMP KINSER, Okinawa &#8212; The referee whistled for a timeout. Players made their way to the water buckets behind their team&#8217;s benches.

They drank cup after cup while toweling beads of sweat from their heads, arms and legs. A few trotted toward electric fans located in the corners &#8212; which just circulated the hot air permeating the gym.

It&#8217;s been that kind of week in the Marine Forces Pacific Regional Basketball Tournament in Kinser Gym, a sprawling 8-year-old facility air-conditioned throughout &#8230; except in the spacious three-court basketball area, which has the ambience of a steam bath or pressure cooker.

Daytime temperatures on Okinawa in July average in the high 80s. Despite the fans and open doors along the sides of the gym, the air inside felt at least that hot.

The regionals would normally be played in September or October. This year they had to be held in July so Armed Forces sports can hold its basketball tournament Aug. 16-24 at Camp Lejeune, N.C., in preparation for the International Military Sports Council&#8217;s (CISM) World Military Games Sept. 13-23 in Catania, Sicily.

Nothing except try to keep cool by drinking plenty of water and basking in the air-conditioned environs elsewhere in Kinser Gym when games are done.

Tuesday was a bit more breezy than Monday, offering relief to players and spectators.

The 34-year-old master sergeant from Columbus, Ohio, who works for the Kinser maintenance battalion&#8217;s communications company, notes differences between his softball and basketball teammates.

Shropshire, who helped Hospital to its first two regional softball tournament victories in 10 years, is finding the going rougher on the hardwood. Hospital lost three times by a margin of 157 points and forfeited a fourth contest Tuesday when only five players showed up. The rest had duty commitments.

3rd Force raced to a 49-26 first-half lead and never looked back. Jay Salyers led the way with 15 points and Reginald Brown hit three 3-pointers to finish with 12 points as 10 of 12 3rd Force players scored. Iwakuni&#8217;s Winfred Murphy had a game-high 18 points, with 13 coming in the second half.

Two-time defending champion Division got its first win, scoring the first 11 points and leading by 51 down the stretch. Norman Capers scored 20 of his game-high 24 points in the first half. For Hospital, which forfeited to Wing earlier in the day, Teo Pardo had 10 points.

Jay Salyers&#39; three-point play with 23.9 seconds left and a steal with .8 seconds remaining lifted 3rd Force to victory in a game that featured 14 lead changes and eight ties. Salyers had 17 points, including 5-for-7 from the line. Wing&#8217;s Kevin Cochran hit six 3-pointers and led all scorers with 31.

Julius Johnson&#8217;s 3-pointer from the key with 1:45 left put Iwakuni ahead to stay. Scott Goldsmith led Iwakuni with 20 points and Johnson added 17. Jack Kennedy topped Base with 19 points in a game featuring six ties and nine lead changes.

Hawaii was held under 100 points for the first time in four games but finished the day unbeaten, leading by as many as 23 in the second half. Nathan McQuirter led five players in double figures with 14 points, 10 in the first half. Paul Davis was high for Division with 12.