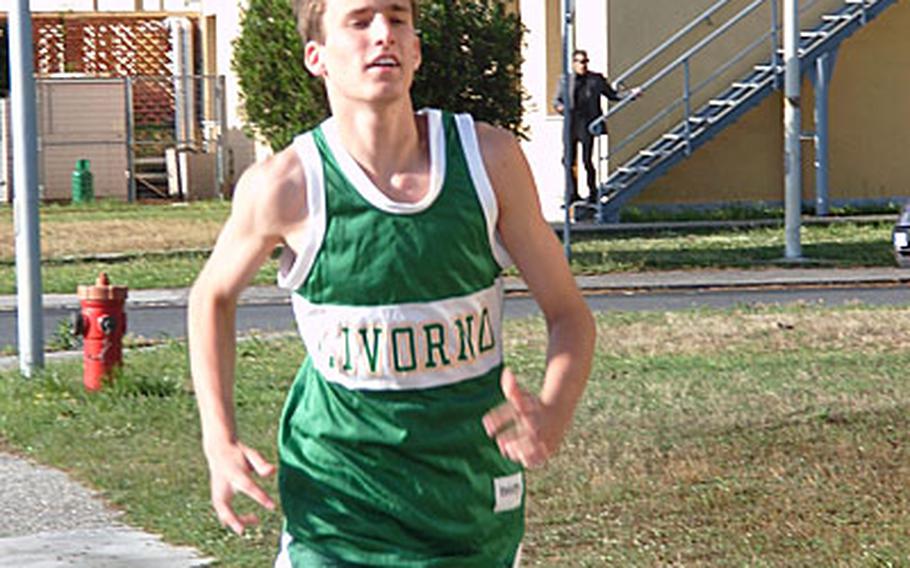 Jacob Denkins, competing in just his third track meet, won the 1,500 and 3,000 meter runs Saturday in the last athletic contest ever for the school. The school on Camp Darby closes at the end of the school year, and it does not have soccer or softball teams. (Photo courtesy of Livorno High School)

No one can accuse Livorno miler Jacob Denkins of not having a sense of the moment.

He posted a personal-best 4 minutes, 57.9 seconds to beat friend, teammate and runner-up Sebastian Miller by more than 26 seconds. The one-two finish for tiny Livorno might have been drama enough for most, but not for Denkins.

A high- and long-jumper as well as a miler, Denkins decided on the spur of the moment to try the 3,000 meters.

He won, clocking an 11:44.10 that topped runner-up Mike Brown of Aviano by 38.2 seconds. Miller placed third to put two Lions on the medals podium for the second time that day and the final time in school history.

The ramifications of that feat weren&#8217;t lost on Denkins.

Denkins, competing in his first year of track and just his third career meet, said the 3,000 meters went smoothly.

For Denkins and his seven track teammates, going on forever won&#8217;t be possible, at least at Livorno. The school is to close next month. Denkins is moving to the Washington, D.C., area where his father has been assigned to Walter Reed Medical Center. Those who are staying at Camp Darby, he said, are ticketed for a two-hour daily bus ride to an international school in Florence.

In addition to the 20 points Denkins earned for his eight-person team with the distance-double victory, he chipped in four for a fourth-place high jump of 5 feet, 5 inches. Miller&#8217;s second in the 1,500 and third in the 3,000 were good for 14 points as the Lions boys team totaled 49, pulling up third behind Italy giants Naples and Aviano and ahead of larger schools such as Sigonella, Vicenza and Marymount International School of Rome.

This season&#8217;s success has inspired Denkins, an outfielder-second baseman whose favorite sport is baseball, to continue his track career.