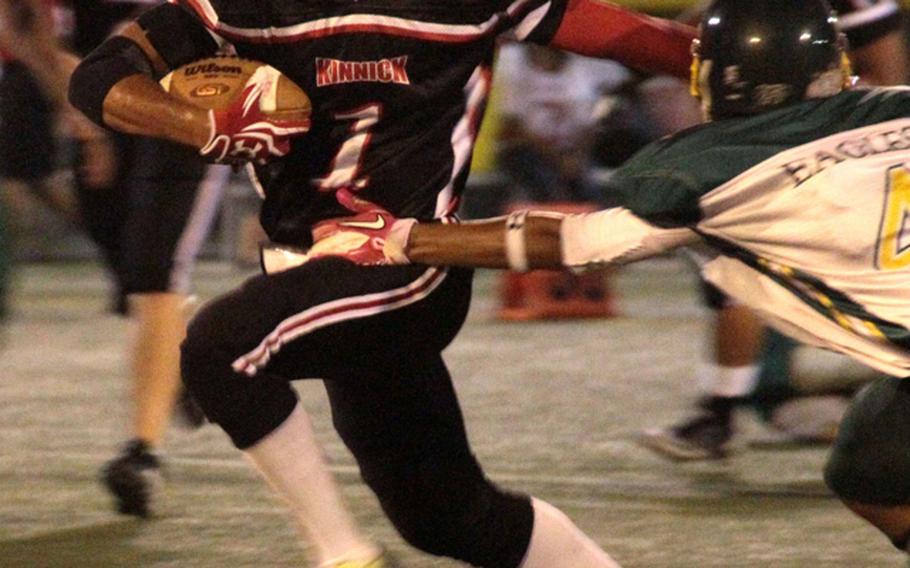 The senior all-purpose star took a kickoff 89 yards for a touchdown to put Kinnick ahead for good, then intercepted a last-gasp pass in the final seconds as the Red Devils rallied from an 11-point deficit to edge Robert D. Edgren 29-26.

&ldquo;We dug ourselves a bit of a hole and climbed out&rdquo; for the second straight week, said coach Dan Joley, whose Red Devils (2-0) came back from a 6-0 deficit the previous week to beat Zama American 20-6. &ldquo;We had a couple of big plays and pulled out the victory.&rdquo;

That came after Edgren (0-2) scored two of its touchdowns on fourth-down plays, seizing an 11-point halftime lead.

It was a far cry from the last two encounters between the DODDS Japan rivals. Kinnick beat Edgren twice by a combined 56-0 last season.

&ldquo;I enjoyed watching them,&rdquo; Joley said of an Edgren team that runs pretty much the same read-option offense that Kinnick does, only with more passing than the Red Devils, who stay mainly on the ground.

&ldquo;They&rsquo;re disciplined. It&rsquo;s fun to see the intensity. They were in the game from start to finish. Their new coach (Blaine Miller) has them dialed in.&rdquo;

&ldquo;We gave them everything we could,&rdquo; Miller said. &ldquo;Our guys played a winning game. They left everything on the field. We lost it on completely broken plays.&rdquo;

Still, he remains optimistic heading into the games that count for Division II title-game berths, starting Saturday when Edgren hosts Osan American. &ldquo;I&rsquo;m really excited for us going into that.&rdquo;