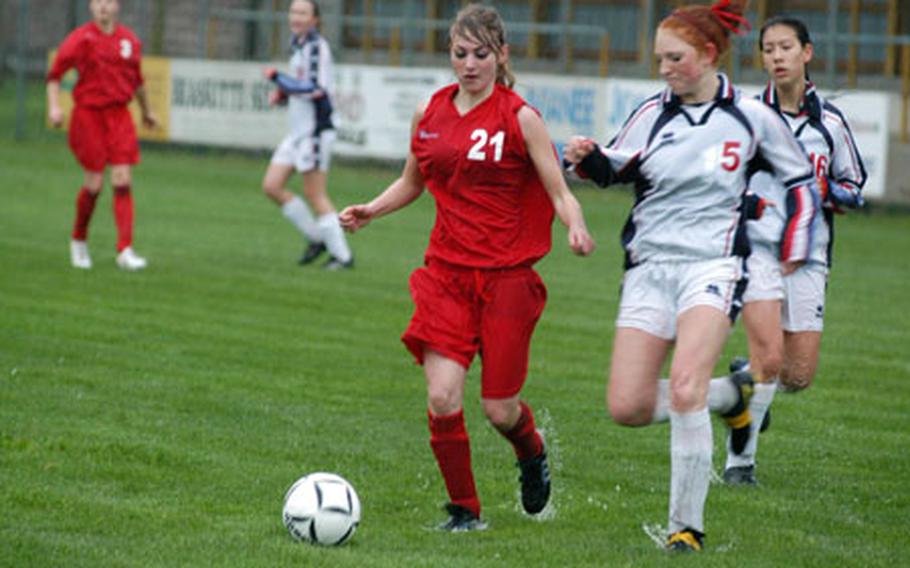 Aviano&#39;s Hannah Watson shadows Derby Ruspoli of the American Overseas School of Rome as they both race for the ball during the first half of the contest between the two schools in Aviano on Saturday. Aviano won 2-1. (Kent Harris / S&S)

However, Aviano also was ready, and the Lady Saints took advantage of some breaks on the wet field to beat AOSR 2-1.

Aviano (3-0) got the decisive goal in the second half when Tiffany Hite&#8217;s low corner kick sailed past several members of each team without anyone touching it as it curled into the net.

AOSR had evened the game a few minutes earlier when Sydney Cowan took a short pass from a free kick and slammed the ball against the cross bar and it bounced down into the net.

It was the only ball that eluded Aviano goalkeeper Lindsey Jackson all day.

With a slippery ball and slippery field, there weren&#8217;t a lot of extended attacks by either team. Aviano took a 1-0 lead into halftime on freshman Ariel Jones&#8217; shot off a rebound. AOSR keeper Courtney Morris couldn&#8217;t hang onto the ball after stopping an initial shot.

Aviano dodged several attempts by AOSR (1-1) to tie when a pair of shots near the goal just missed, and an errant kick by an Aviano defender sailed just wide of the net to avoid an own goal.