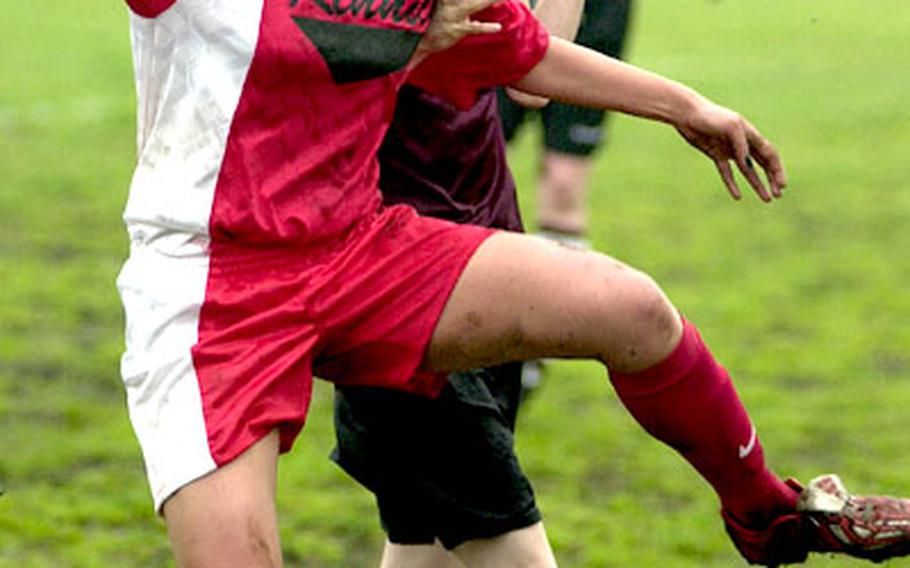 Back on familiar turf, he guided the school&#8217;s girls soccer team into uncharted territory this spring &#8212; and brought down an institution.

&#8220;The mighty ASIJ has fallen,&#8221; said a smiling Hindie, whose team defeated the American School In Japan 2-0 Saturday at Mustang Valley to lock up its first Japan Soccer League regular-season title.

The victory completed a dream season for the Lady Red Devils (15-2-2 overall, 11-1-1 in JSL), who had 11 shutouts and became the first team to finish ahead of ASIJ, which failed to earn at least a share of the league title for the first time since forming a girls soccer program in 1989.

A year ago, Hindie stood on the other side of the globe, a second-grade teacher at Rota Naval Station in Spain, minus a coaching gig. He&#8217;d spent the previous three years teaching at Kinnick Middle School and coaching tennis and boys soccer at Kinnick High.

But Hindie was lured back to Spain, where his mother, Carmen, was diagnosed with colon cancer. Rota was his childhood home, and the place his father, Peter, had been a DODDS teacher since 1972.

But while Hindie spent most of his days teaching at Rota, his mother was either living at the family&#8217;s home on Mallorca or getting cancer treatment in the United States.

In his absence, the boys soccer and tennis vacancies were filled. An opportunity existed with the Kinnick girls soccer team.

&#8220;I was a little scared,&#8221; Hindie said. &#8220;Coaching, strategy, techniques used in practice, the mentality and psychology is different from boys. Then you have girls who have to get accustomed to a new coach, new style, new strategies.

After a 3-1 loss to ASIJ early in the season, Kinnick went unbeaten in its next 15 matches, from March 21 to May 1, the fourth day of the Class AA Far East Tournament, where the Lady Red Devils placed third &#8212; their highest finish in four years.

Zukowski, who played for Kinnick prior to Hindie&#8217;s return, says his style has benefited the team.

&#8220;Coach Hindie knows how to work with players much more,&#8221; Zukowski said. &#8220;He actually took the time to work with us individually and develop us, as opposed to the other coaches, who were more focused on us as a team. I like this better.&#8221;

Bringing down ASIJ was certainly a highlight.

They&#8217;ve also had to maintain their focus after the Class AA tournament. For the first time, the JSL season stretched two weeks beyond the Far East final.

The Kinnick girls team seemed unfazed by the extension.